10 Powerful Symbols in The Scarlet Letter

A symbol is an object that stands for something else, such as an idea or concept, or otherwise conveys meaning. There are many symbols in The Scarlet Letter. Discover 10 of the most powerful examples of symbolism in this great novel. 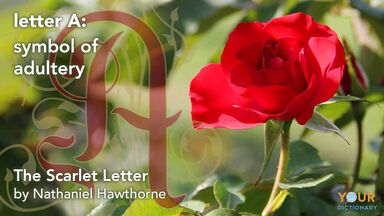 symbolism of The Scarlett Letter A and red rose
Advertisement

The letter "A" is the most overt symbol in Nathaniel Hawthorne's The Scarlet Letter, as it's referenced even in the title of the book. The scarlet "A" that Hester Prynne is ordered to wear stands for her sin of adultery. Intended as a badge of dishonor, it comes to represent Hester's identity, which evolves during the book. She grows and becomes more able (another word that starts with "a") throughout the book as a result of being branded with the letter.

In The Scarlet Letter, the color red is a symbol of Hester's great passion and love, as well as her sins. When she removes the "A" she has been sentenced to wear, the color red is still part of who she is, evidenced by the crimson flush that appears on her cheeks.

The rose bush is a symbol for Hester. Its flowers (not surprisingly) are red. Red roses are known for their great beauty, but they are also difficult to control, as is Hester. As perennial plants that come back year after year, roses are known to be able to survive through even those most difficult of conditions. That ability to overcome difficult circumstances is also reflected in Hester's character.

Pearl's character is a symbol of great value and beauty, though of course, she is also the living result of Hester's sin of adultery. Her name alludes to the "pearl of great price" mentioned in the book of Matthew in the Bible. Hester did indeed pay a great price for her adultery, yet Pearl would not otherwise have been born. Pearl is moody and uncontrollable, so her nature reflects her mother's passionate nature, without which Pearl would never have been born.

It's no accident that Chillingworth's name reflects the coldness and hardness of his heart and nature. He is an icy character with no room in his heart for anything other than revenge. As a result, he ends up being frozen out of humanity and becomes a manifestation of evil.

The scaffold is a symbol of punishment and public confession. Rather than hiding away in shame, those who have committed sin or crimes are expected to stand before the community for all to see and be judged for what they have done. It's both a way of forcing those who are guilty of wrongdoing to own their actions and a deterrent to others to keep them from sinning. In that way, the scaffold is often a symbol of balance.

The spiked, heavy wooden door of the prison is a symbol of punishment. The spikes and bars on the door symbolize how the harsh and unforgiving approach to justice in judgemental Puritan society.

In The Scarlet Letter, shadows symbolize concealment of the truth. Dimmesdale, who refuses to admit his sin with Hester or that he is Pearl's father, is often portrayed as being in the shadows. Throughout the story, as long as he continues to conceal what he has done, he is in shadows or darkness.

Sunlight symbolizes both truth and the grace of God in The Scarlet Letter. Once the truth of Hester's sin is revealed in public, she then stands in the sunlight. Once Dimmesdale reveals his role, he too stands in the sunlight. Later, when Hester and Dimmesdale decide to flee together to England, they are in the forest. Once their decision has been made, sunlight breaks through and shines upon them, indicating that their decision has been blessed.