In Fahrenheit 451, Ray Bradbury paints a frightening picture of what the future might become through a variety of themes. Discover several key Fahrenheit 451 themes so you'll be able to comprehend the author's overall message. 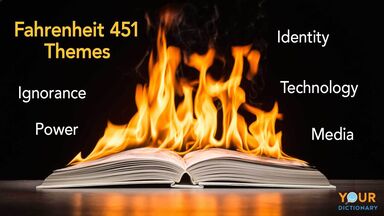 In Fahrenheit 451, the people voluntarily eliminate (ban) books from society because they are overwhelmed and frightened by trying to understand what is in them. They prefer a world where they don't have to deal with such things, choosing instead a passive life of ignorance. The members of society opt to destroy the books to "protect" mankind from knowledge. This theme conveys how easy it is for ignorance to take over at a societal level and condemn the population to a life of willful ignorance while also ensuring that future generations will not be able to access knowledge from the past.

The books are symbols of knowledge in Fahrenheit 451. This is why the government makes it a crime to own books, even though the people were voluntarily giving up their books. Through this theme, Bradbury is emphasizing how getting people to give up their access to knowledge benefits those who seek to keep the people in a subordinate role. Those in power don't want the people to have access to knowledge that could one day lead them to challenge the way things are, which leads to censorship and the criminalization of knowledge. As long as books are a crime, people won't have access to knowledge. That makes it easy for those in power to maintain control.

While books represent knowledge in Fahrenheit 451, the mass media (in the form of television and radio shows) represent a pathway to ignorance. While mass media as entertainment may not be inherently bad, the way the people in this story let it take over their lives and replace their individuality and willingness to engage in independent thought is most definitely a destructive force. The government skillfully uses media strategies that appeal to the people's desire for comfort and instant gratification to keep them focused on mass media rather than the real world. People are so distracted that they lose their connection to the real world.

As people become entranced by mindless television and radio shows, they begin to lose their individual identities. The more engrossed people become in entertainment, the less connected they are to other human beings. With everyone watching or listening to the same shows, that means that everyone is getting the same messages. Rather than being a society populated by individuals with differing thoughts, experiences and ideas, "the people" become more like a single entity. One could argue that they've deliberately allowed themselves to be brainwashed, becoming simply pawns of those who hold power. The few who try to maintain their sense of identity are targeted for elimination by those in power.

While technological advances are often viewed as a positive thing, Fahrenheit 451 provides readers with a glimpse of the darker side of how technology can impact society. Television numbs the minds of those who fall under its spell, numbing their senses to the point where they lose the ability to engage in critical thinking or free thought at any level. As an example of situational irony, firefighters use a flamethrower to burn books (i.e., destroy knowledge). Robots hunt down those who dare to dissent and civilization is ultimately destroyed by nuclear technology.

Now that you're familiar with some of the major themes in Fahrenheit 451, take the time to explore some of the other literary devices and strategies used in the text. Start by discovering an example of allusion in the book. Then, review an example of an epiphany experienced by one of the characters. You'll be on your way to developing a solid understanding of this extraordinary book, both as a powerful story and an example of great writing.