5 Major Themes in The Great Gatsby

Long considered a great work of literature, The Great Gatsby by F. Scott Fitzgerald has several interesting themes, which are topics central to the overall message of the book. Discover five of the key themes in The Great Gatsby to enhance your understanding of this 1922 novel. 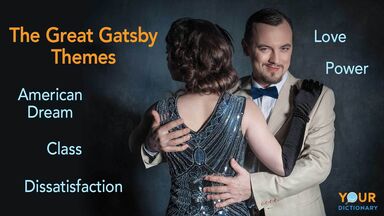 themes in The Great Gatsby
Advertisement

The American Dream is one of the major themes in The Great Gatsby. The life of Jay Gatsby himself is an embodiment of the American Dream, as he's a poor farm boy who changes his name and reinvents himself to become wealthy and successful, at least financially. His story is a 1920s jazz age take on the classic rags to riches story, transitioning from a simple life where money is scarce to the riches and extravagance that become possible once one has money.

Of course, being a self-made man, Jay's entry into a wealthy lifestyle is via "new money." Even though he can live an extravagant lifestyle that puts him in contact with people who have been wealthy their whole lives, he can never truly be part of the "old money" crowd. Jay can run with them, but he'll never be one of them. Those who come from wealth continue to look down on Jay and others with "new" money, even as they make space for the newcomers to the extravagant social scene in their lives, at least on the surface.

Even after achieving a version of the American Dream and living the lifestyle to which he aspired, Jay Gatsby remained dissatisfied with his success. Despite all he has done, Jay desperately wants what he can't have. He reaches one milestone or goal only to find that there is always another level, to a point where further advancement is elusive or impossible. Too late, Jay realizes that enough will never be enough; that no matter what he accomplishes, he will always yearn for more and grasp for what is out of his reach. The book's green light is an example of a motif that links to the theme of dissatisfaction.

In The Great Gatsby, we see how love and marriage are intertwined with society and class, as well as dissatisfaction. Jay Gatsby will never win the love of his life, the upper-crust Daisy Buchanan, away from her husband Tom. Earlier in life, Daisy and Jay had dated, but when it was time to marry she chose someone from her own social class (Tom Buchanan). Of course, it may be that Jay really only wants Daisy because she's out of reach and represents what he cannot have, both in terms of love and social status.

Marriage is not portrayed in a positive way. Throughout the book, Tom is cheating on Daisy. Ironically, Tom's mistress (Myrtle) is working-class and married to someone in her same class. Tom has the "it" girl of the upper class, yet seems to be searching below his social station for something that is missing from his marriage. It's important to note that Daisy remains with the spouse who shares her social status rather than walking away him for the love of the nouveau-riche Gatsby. Daisy eliminates the threat to her marriage via a hit-and-run incident rather than walking away from her cheating spouse.

The theme of power is integral to The Great Gatsby, and it's intertwined with the other themes. The power Tom has over Daisy is why she continues to stay with him, even after his infidelity and knowledge of Jay's feelings for her. That's because Daisy's position in society is linked inextricably to her identity as the wife of Tom Buchanan. He also controls the money in the marriage, which provides him with another form of power over Daisy.

Without Tom, Daisy might find loyalty and true love with Jay, and she wouldn't be penniless. While Jay doesn't have old money or a spot in the upper class of society, he still has money. However, Daisy ultimately cares more about status and social standing than she cares for Jay or even herself. Tom knows he wields this power and relishes it, as it gives him power not only over Daisy but also over Jay. Tom relishes the fact that Jay wants Daisy, but can't have her.

These themes are illustrated in many quotes from The Great Gatsby. The book makes a powerful statement about the human condition and the social environment of the 1920s. It shined a light on the unique combination of excess and disillusionment of the 1920s in the United States. These themes and symbols from The Great Gatsby are still valid and applicable to society today. Often, people strive for what is out of reach only to realize that what they thought they wanted wouldn't truly make them happy. All the money in the world can't replace the emptiness that comes from unrealized dreams and living in a way that is based more on appearances than substances. While theme is on your mind, dig a little deeper by reviewing some more examples of theme in literature.