One of the most famous literary tragedies is William Shakespeare's Hamlet. The play provides a near-perfect use of literary devices, including symbolism, to establish tone, plot and characterization. Take a look at the five principal symbols in Hamlet and how they move the tragic story along. 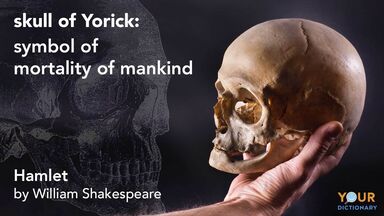 Symbolism in Hamlet begins in the very first scene of the play, as the weather represents the events that are about to occur. Barnardo and Francisco stand sentinel outside the palace, and Francisco comments on the weather.

FRANCISCO
For this relief much thanks. ’Tis bitter cold,
And I am sick at heart."
- Act 1, Scene 1

At first, it seems like the observation isn't meaningful. But after the ghost of the king appears to Barnardo, Marcellus and Horatio, Horatio worries that it is a harbinger for terrible things to come, as it was for the fall of Julius Caesar.

"HORATIO
A mote it is to trouble the mind’s eye.
In the most high and palmy state of Rome,
A little ere the mightiest Julius fell,
The graves stood tenantless and the sheeted dead
Did squeak and gibber in the Roman streets;
As stars with trains of fire and dews of blood,
Disasters in the sun; and the moist star,
Upon whose influence Neptune’s empire stands,
Was sick almost to doomsday with eclipse.
And even the like precurse of fierce events,
As harbingers preceding still the fates
And prologue to the omen coming on,
Have heaven and earth together demonstrated
Unto our climatures and countrymen."
- Act 1, Scene 1

His comment about "heaven and earth together" reflects the weather itself. The ghost immediately reappears after Horatio's statement, and when the guards bring Hamlet to see the ghost for himself, he says:

"HAMLET.
The air bites shrewdly; it is very cold.

The cold weather again represents the terrible events to come, as Hamlet is about to learn the truth about his father's death. Bad weather is mentioned throughout the play before the plot takes a turn for the worse.

Hamlet begins the play in mourning for his dead father and resentment for his too-soon-married mother and uncle, the new king Claudius. He is always dressed in black throughout the play, even when wearing his costumes to fake insanity. These dark outfits symbolize Hamlet's constant state of grief. It's one of the first things his mother tells him:

"QUEEN
Good Hamlet, cast thy nighted colour off,
And let thine eye look like a friend on Denmark.
Do not for ever with thy vailed lids
Seek for thy noble father in the dust.
Thou know’st ’tis common, all that lives must die,
Passing through nature to eternity."
- Act 1, Scene 2

The queen chastises Hamlet for not moving on from his father's death. Hamlet explains that his clothing is only part of the grief he feels:

"HAMLET
Ay, madam, it is common.

QUEEN
If it be,
Why seems it so particular with thee?

HAMLET
Seems, madam! Nay, it is; I know not seems.
’Tis not alone my inky cloak, good mother,
Nor customary suits of solemn black,
Nor windy suspiration of forc’d breath,
No, nor the fruitful river in the eye,
Nor the dejected haviour of the visage,
Together with all forms, moods, shows of grief,
That can denote me truly. These indeed seem,
For they are actions that a man might play;
But I have that within which passeth show;
These but the trappings and the suits of woe."
- Act 1, Scene 2

Later, when Ophelia comments that Hamlet's father died four months ago, not two hours ago, he sarcastically replies that he should get rid of his mourning clothes.

"HAMLET
So long? Nay then, let the devil wear black, for I’ll have a suit of sables. O heavens! die two months ago, and not forgotten yet? Then there’s hope a great man’s memory may outlive his life half a year. But by’r lady, he must build churches then; or else shall he suffer not thinking on, with the hobby-horse, whose epitaph is ‘For, O, for O, the hobby-horse is forgot!’"
- Act 3, Scene 2

Hamlet's dark clothing represents his constant mourning despite everyone's insistence for him to move on. He talks about taking them off but isn't serious; in fact, Hamlet dresses in black throughout the entirety of the play.

When Hamlet learns that a troupe of players has visited the palace, he is overjoyed. But it's not his love of theatre that fuels Hamlet's excitement — it's the opportunity to incriminate his uncle with a play Hamlet calls "The Mousetrap." The play mirrors the exact way the ghost of Hamlet's father described his own murder.

"Enter a King and a Queen very lovingly; the Queen embracing him and he her. She kneels, and makes show of protestation unto him. He takes her up, and declines his head upon her neck. Lays him down upon a bank of flowers. She, seeing him asleep, leaves him. Anon comes in a fellow, takes off his crown, kisses it, pours poison in the King’s ears, and exits. The Queen returns, finds the King dead, and makes passionate action. The Poisoner with some three or four Mutes, comes in again, seeming to lament with her. The dead body is carried away. The Poisoner woos the Queen with gifts. She seems loth and unwilling awhile, but in the end accepts his love."
- Act 3, Scene 2

Hamlet watches his uncle and mother eagerly throughout the play. When King Claudius demands to know the name of the play, Hamlet states:

"HAMLET
The Mousetrap. Marry, how? Tropically. This play is the image of a murder done in Vienna. Gonzago is the Duke’s name, his wife Baptista: you shall see anon; ’tis a knavish piece of work: but what o’ that? Your majesty, and we that have free souls, it touches us not. Let the gall’d jade wince; our withers are unwrung."
- Act 3, Scene 2

He teases Claudius that because they are not guilty of anything, the play shouldn't affect them at all. As the play proceeds, Claudius suddenly exits. Hamlet takes his behavior as guilt and is delighted by the success of his plan: "What, frighted with false fire?" The play-within-a-play symbolizes both the events of Hamlet itself and Hamlet's plan for vengeance.

The flowers that Ophelia wears and distributes in the tragedy represent her lost innocence. When Ophelia's father, Polonius, is killed (by Hamlet), she slips into insanity. She enters the scene, singing:

"OPHELIA.
[Sings.]
Larded all with sweet flowers;
Which bewept to the grave did go
With true-love showers."
- Act 4, Scene 5

Ophelia exits, and when she reenters to greet Laertes, she is "fantastically dressed with straw and flowers." She distributes flowers to the other characters and names what each flower symbolizes.

After another brief song, Ophelia exits once more. The audience next hears about her after she has drowned herself from grief. The final mention of flowers in Hamlet comes when Queen Gertrude visits Ophelia's grave.

"QUEEN
[Scattering flowers.] Sweets to the sweet. Farewell.
I hop’d thou shouldst have been my Hamlet’s wife;
I thought thy bride-bed to have deck’d, sweet maid,
And not have strew’d thy grave."
- Act 5, Scene 1

The beauty of both Ophelia and her flowers is gone in this scene. Only death and more tragedy to follow; no character shares Ophelia's innocence.

The Skull of Yorick

When you think of Hamlet, you probably think of the skull of Yorick. The skull is the most famous symbol in the play, and it represents the mortality of mankind. When Hamlet realizes that the skull in the churchyard is his old jester Yorick he picks it up and contemplates it.

"HAMLET
Alas, poor Yorick. I knew him, Horatio, a fellow of infinite jest, of most excellent fancy. He hath borne me on his back a thousand times; and now, how abhorred in my imagination it is! My gorge rises at it. Here hung those lips that I have kiss’d I know not how oft. Where be your gibes now? your gambols? your songs? your flashes of merriment, that were wont to set the table on a roar? Not one now, to mock your own grinning? Quite chop-fallen?"
- Act 5, Scene 1

Nothing remains of the merry, joyful Yorick other than a simple piece of bone. Hamlet throws the skull down and comments that Alexander the Great and Julius Caeser also became mere bones upon their deaths:

"HAMLET
No, faith, not a jot. But to follow him thither with modesty enough, and likelihood to lead it; as thus. Alexander died, Alexander was buried, Alexander returneth into dust; the dust is earth; of earth we make loam; and why of that loam whereto he was converted might they not stop a beer-barrel?
Imperious Caesar, dead and turn’d to clay,
Might stop a hole to keep the wind away.
O, that that earth which kept the world in awe
Should patch a wall t’expel the winter’s flaw ..."
- Act 5, Scene 1

The skull symbolizes the fruitless and bleak nature of life — no matter what you do or how much you accomplish, everyone ends up in the graveyard. Throughout the play, Hamlet has insisted that his father's life had meaning beyond death but now is faced with the truth that death comes to all.

To Read, or Not to Read

The symbols in Hamlet set the dismal mood and tragic events to come in the plot. They also help to characterize Hamlet himself and to connect the audience to his mindset at all times. Learn more about how Hamlet communicates to the audience with these examples of famous literary asides. You can also examine how character foils reveal more about a protagonist and their motivation.