5 Symbols in To Kill a Mockingbird & What They Represent 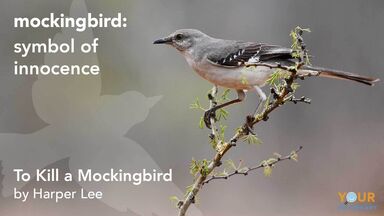 The mockingbird functions as a symbol for the innocence of Tom Robinson, whose life is destroyed by the very system that should protect the innocent. It also symbolizes Boo Radley and the children, other innocents in the story. The mockingbird appears so much throughout the story that it's more than just a symbol; it's actually an example of motif.

The rabid dog in To Kill a Mockingbird is a symbol of racism. In the book, the dog is referred to as a mad dog, afflicted with an illness that causes it to be dangerous to other people. Maycomb County itself is also afflicted with a sickness (racism) that makes it a dangerous place for people who don't fit in. Just as Atticus steps up to be the one to put down the rabid dog, even though using a gun and killing are against his nature, he attempts to do the same with the racism that is threatening Tom Robinson and, ultimately, all of society.

Atticus shoots the dog because it is the right thing to do for the greater good, just as he takes on the task of defending the wrongly accused Tom Robinson. Just as the other townspeople won't help with the dog even though they benefit from Atticus' actions, the jury members also won't do the right thing even though Atticus clearly demonstrates Tom's innocence in the courtroom.

The nut grass that Miss Maudie strives to eliminate from her garden symbolizes the rampant racism in Maycomb County, as well as the whispers, rumors and gossip that spread so quickly throughout the community. Her issue with nut grass is that when it takes hold, it's hard to get rid of it and it spreads everywhere. The only way to get rid of it is to dig down deep and pull up the entire root.

The same is true for the entrenched prejudice based on race that prevents justice for Tom and the nosy, mean townspeople who make life miserable for Boo Radley and others in the community who are different from the norms. In Maycomb county, even the teachers encourage racism and intolerance, so it's not likely to go away anytime soon. It's certainly present in the jury that should ensure that Tom gets a fair trial, yet convicts him even though there really is no question of his innocence. Try as he might, Atticus is just one man. He can't remove Maycomb County's prejudice by the root, so it'll stay there and spread.

The flowers grown by some of the characters symbolize that beauty can grow out of darkness and evil. Ms. Maudie likes to grow Azaleas, which are particularly known for growing in adverse conditions, such as the racist environment of the story's setting. They bloom only for a short period of time and all at once, symbolizing that, on occasion, there is beauty in Maycomb County.

Mayella Ewell, the character who accuses Tom Robinson, takes pleasure in growing beautiful geraniums in flowerpots in front of her dilapidated home. These flowers symbolize her efforts to beautify what is otherwise her bleak existence in a family full of other hateful characters. They also symbolize the fact that there is some good in everyone, even someone who would do something so unjust as accusing an innocent man of a horrible crime. Mayella committed a heinous act against Tom, yet was able to cultivate beauty in the form of lovely red geraniums.

Exploring Symbolism in To Kill a Mockingbird

These five examples of symbols in To Kill a Mockingbird aren't the only ones in the book. Explore the text to see what other symbols you can identify. You may find it helpful to first review some examples of some of the book's key themes. The more you know about the book's central messages, the easier it'll be to identify examples of symbolism in the text. If you love this book, take the time to learn more about Harper Lee, the Alabama native who penned this extraordinary novel. Her story is a fascinating one.