6 Central Lord of the Flies Themes

Lord of the Flies is a classic that has been on school reading lists for many decades. Even if you're not required to read this book, it's a great one to pick up and read. Not only is it a great story, but the Lord of the Flies themes also convey powerful messages. Discover six of the central themes in this important work of literature. 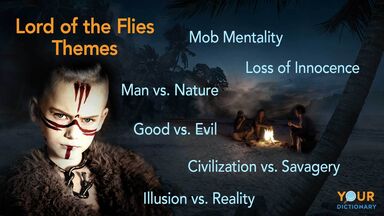 themes of lord of the flies
Advertisement

The struggle of man versus nature is the first theme that becomes obvious in William Golding's Lord of the Flies, since the story opens with a group of schoolboys getting stranded with no means of survival or reaching out to help. They have to rely on their limited survival skills to figure out how to get food, water and shelter while staying safe in an unfamiliar and undeveloped place. Their focus is on how man can survive in nature, and they figure that out. It doesn't take long of being in that survival situation, though, before nature starts to change the boys. Or, one might argue that being on their own in the natural world lets the boys' true natures emerge. That's when the next theme starts to emerge.

After the very beginning of this popular novel, the theme of civilization versus savagery becomes the predominant theme in Lord of the Flies. As the story unfolds, the boys leave behind the confines of rules and order, and they grow accustomed to life in the jungle where there are no such prescribed restrictions on behavior. The boys don't all react the same, with a few preferring structure and order, but most coming to quickly adapt to the chaos of the jungle. The message here is that savagery can quickly become the norm in an environment where people are left to their own devices. In other words, civilization is but a thin, tenuous line between the natural savagery that lies within human nature.

Good versus evil is one of the primary themes in Lord of the Flies. In this story, behaviors that align with what would be considered moral in civilized society fall on the side of "good." Alternately, behaviors that are more associated with man's primal urges would be considered "evil." This aligns with the theme of civilization vs. savagery, in a way that judges actions based on whether they are consistent with order and societal norms (good) or the chaos of the jungle (evil). There are many examples of both within the book, from the beast warning Simon that what the boys really have to fear is the best that lies within each of them. The boys have long viewed the beast as evil and dangerous, yet what they fear lives within them.

Mob mentality is another key theme in Lord of the Flies. This plays out time and time again when the boys get in the habit of acting as a group (or pack, as the case may be) rather than individually as they become even more savage. Acting as a unit, they do things that at least some individual members would never do on their own. This first comes up when the boys are chanting and singing about killing the pig early in the story. It continues to come up throughout the book, in more and more sinister ways. It's like the group chant works them into a frenzy so they can act as a unit rather than individuals. They even paint their faces, as if to hide their individual identities and blend into the mob. As time goes by and their group actions become more and more violent, the mob mentality culminates in the other boys banding together to kill Simon in a very beast-like manner.

At the beginning of the story, the boys are innocents. As they learn to survive at all costs in the savage world of the jungle, though, this starts to change. Civilization had allowed them to remain innocent, but once that structure was gone there was no room for the wide-eyed wonder of childhood. Instead, as a natural part of learning to survive in the jungle, the loss of innocence was a natural part of the process. As they adapted, their more basic impulses took over and impacted their outlook on the world around, them, each other and what they were willing to do in order to survive.

Lord of the Flies explores the nature of reality, as contrasted with illusion. A key theme of the book is that many things people perceive as being real exist only because people believe that they do. In other words, some aspects of what is believed to be real are really just an illusion, including civilization itself. Readers quickly see that the order and chaos of civilization may well just be an illusion, as it can dissolve so quickly in the absence of external forces to maintain order. Additionally, many things that the boys believe to be real are actually not real. For example, their beliefs about the beast are not accurate. Yet this mistaken belief guides their actions and causes them to become the very thing they so fear.

Beyond the Themes of Lord of the Files

These are just a few of the themes associated with Lord of the Flies. This book has many powerful messages and lessons, some of which are uncomfortable for people to learn or accept. Now that you know what some of this book's central themes are, take the time to learn more about it. Start by exploring the symbolism in Lord of the Flies.