One of the most powerful books ever written, 1984, offers many meaningful themes related to government and the governed in a totalitarian society. Discover some of the key 1984 themes to improve your understanding of this important work of literature. 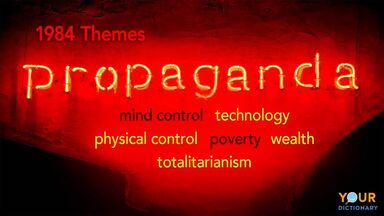 The primary theme of 1984 by George Orwell is to warn readers of the dangers of totalitarianism. The central focus of the book is to convey the extreme level of control and power possible under a truly totalitarian regime. It explores how such a governmental system would impact society and the people who live in it. In the book, "the Party" represents communism, but can apply to any totalitarian or authoritarian approach to government. It's a cautionary tale on how tenuous freedom really is.

In 1984, the propaganda machine is a symbol of information control, as well as the Ministry of Truth's blatant disregard for the truth. It also symbolizes control over how reality is perceived. As the source of all information, the Ministry can present whatever it wants as "fact," even if what they are sharing is an example of doublespeak or completely false. Since no other sources are available, there is no way for this governmental body to be fact-checked or questioned. By "correcting" past information to reflect what the government wants it to say, the propaganda machine is being used to rewrite history into a false narrative.

Language as a Tool for Mind Control

The propaganda machine itself is a tool for mind control, though it only works through the use of language. In the book, when the government replaces English with a new language that is a blatant attempt at mind control via language. Orwell wants readers to realize that language links directly to what people "know" and think, so they'll realize how dangerous it is to let the government dictate language. The name of the new language (Newspeak) is a bit ironic, as no actual "news" is available to the people of Oceania. This seems to speak to how critical freedom of the press really is, as it could be the only line between truth and mind control through altered reality.

The Party doesn't just seek to control the flow of information to people or the language they use, but also to exert control from a physical perspective as well. In other words, mind control is not enough for complete submission to the will of the state. People can be punished for so much as an eye movement or twitch that someone in power interprets as disloyalty or rebellion. The people are kept in such a state of poverty and required to work to exhaustion to prevent them from being able to organize or resist. As a result of the Party's physical control efforts, the people are too tired to fight back against the lies being fed to them or to try to improve their circumstances.

The phrase "Big Brother is watching you" originates in 1984 as a reference to the technology used by the Party to monitor what the people are doing at all times. "Big brother" represents governmental monitoring through technology. The citizens are never free from the watchful eye of the totalitarian powers that be, so their every word and action can be observed at any time. This is a statement on the risks that technology can pose in the hands of those who benefit from controlling others.

Wealth of the Ruling Class

In the book, those who are in the ruling class enjoy the spoils of wealth, thus illustrating the theme that totalitarianism leads to financial benefit and status to those who are in power. Those in power live lavish lifestyles made available to them through wealth and power. Those who have such good fortune seek to keep it, by any means necessary. There is no path to that kind of lifestyle for people who are not part of the ruling class.

Poverty of The Proles

In 1984, the people, referred to as proles, do not enjoy the same wealth as the leaders, nor is there a middle class. Extreme poverty, with no way out, is all that is available to them. Orwell wants readers to realize that totalitarianism is designed to create a society of downtrodden citizens over whom the elite exert total control. If the people were to be able to pull themselves up out of poverty, they just might not be so dependent on the Party. They might start to think for themselves and even develop some power of their own. That just cannot be allowed in a totalitarian society.

These are just a few of the many interesting themes present in 1984. This stark dystopian tale is just as relevant today as when it was written in 1948. Even though it focused on the future at the time it was written and the year 1984 is now squarely in the past, there are many important lessons to be learned from this work. Consider the book through the lens of yellow journalism in history and today. Then, explore fake news and consider how it relates to the themes of this powerful novel.