7 Key Themes in To Kill a Mockingbird

To Kill a Mockingbird is a powerful story that conveys many meaningful and important themes. That's why this book and its powerful story remain so popular today, many decades beyond its 1960 publication date. Discover some of the major themes in To Kill a Mockingbird to make sure you understand the message that author Harper Lee wanted readers to take away from the book. 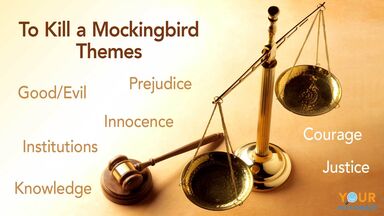 themes in To Kill a Mockingbird
Advertisement

The theme of good versus evil permeates every aspect of this book. Atticus Finch is driven by the belief that, while most people may have elements of both good and evil in them, good will usually win out in the end. Throughout the book, though, he sees for himself that evil does often win out, especially when it grows out of ignorance, racism, fear, and hatred for people who are different or ideas that challenge the status quo.

At the beginning of the book, the children (Scout, Jem and Dill) also believe that people are inherently good, but as they grow to maturity, they too come to see that goodness does not always win out, nor does justice. Their journey to maturity in many ways mirrors Atticus' journey, as he comes to realize that his beloved legal system in some ways is designed to be unjust.

Racial prejudice is the most overt theme in To Kill a Mockingbird, as the book focuses on the trial of a black man (Tom Robinson) accused of a crime he did not commit in a community where racism is the norm. It explores racism within the legal system as well as the Deep South community in which the story is set. When racial hatred runs so deep in a community that it is taught in school, how is it possible for a black man to receive a fair trial? What does a jury of one's peers even look like in such a situation?

To Kill a Mockingbird emphasizes that standing up for what is right requires both courage and bravery. We see these traits in many characters of the book, while others exhibit cowardice. Atticus and the children exhibit courage and bravery in their insistence on speaking out for justice rather than going along with the status quo, even when doing so puts them at risk. Boo Radley also shows bravery when he rescues the children.

Justice vs. the Law Theme

The book communicates that following the law isn't the same as justice. Laws aren't perfect; sometimes following the letter of the law does not provide a path to justice. Atticus learns that, in order to do what is right and just, one can't always rely on the law or the legal system. After all, laws are made by people. As a result, they reflect societal norms, even when those norms are based on hatred and prejudice. Even in a case like Tom Robinson's, where to anyone open to seeing the facts, it is obvious that he is innocent, prejudice is so ingrained into the justice system that justice fails to be served.

The book conveys the theme that true knowledge doesn't always come from formal classroom education. As a matter of fact, the teachers who work at Scout's school seem to be more focused on perpetuating ignorance and bigotry than teaching the children factual information and critical thinking skills. At school, Scout is dissuaded from reading on her own or learning new skills at home and not encouraged to reach her potential, all the while being encouraged to accept hatred and prejudice as the way of the world. The children learn more from Atticus and Boo Radley than in school.

Lack of Trust in Institutions

In To Kill a Mockingbird, the theme of whether societal institutions can really be trusted is explored. Can the legal system be trusted to bring about justice? Atticus wants so badly to believe that it can but ultimately learns that it cannot, at least where race is concerned. Can the schools be trusted to educate children? With teachers being critical of students' efforts to learn outside of the classroom, it seems apparent that the focus is more on perpetuating the past than helping the children grow and prepare for a better future. A key takeaway from this book is that good people of character sometimes have to go against societal institutions to do what is right, even as working within the institutions remains necessary for societal reasons.

The motif of the mockingbird, which appears throughout the story, reinforces the theme of innocence lost. In this book, the children experience a loss of innocence as their awareness of and involvement in the ugly sides of life in their community forever change their perspectives on community, values and — ultimately — right vs. wrong and good vs. evil. However, they are not the only ones. Atticus too loses his ability to have faith that the law will ultimately lead to justice and that the people who make up a jury will care more about the facts and a just verdict than norms, hatred and beliefs about race. Ultimately, of course, Tom Robinson — the accused and innocent man who is guilty only of being Black in a community defined by racial prejudice — is found guilty of a crime he did not commit.

Lessons Learned From To Kill a Mockingbird Themes

These are seven of the major themes in To Kill a Mockingbird, but they aren't the only ones. When you read or re-read the book, consider what other key themes are there. Explore the main symbols in To Kill a Mockingbird that contribute to these themes. Also think about the book's setting, both in terms of where it took place (a small town in southern Alabama) and when (prior to the Civil Rights movement). This can help you better understand the themes and lessons in this important work of literature, as well as why the story was considered scandalous when it was published. To put it in the context of present-day challenges that still exist, review these examples of xenophobia and consider how they relate to the lessons of To Kill a Mockingbird.