7 Significant Symbols in The Great Gatsby

It's not hard to find interesting symbols in The Great Gatsby. This F. Scott Fitzgerald novel is an enjoyable read that makes a powerful statement about the American Dream and the excesses of the Jazz Age through a unique combination of prose and symbols. Discover seven of the most significant examples of symbolism in The Great Gatsby. 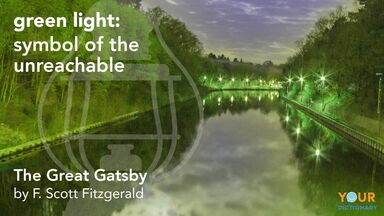 symbols in The Great Gatsby
Advertisement

The green light on Daisy Buchanan's East Egg dock that Jay Gatsby can somewhat see from his dock across the water in West Egg is a symbol of the unreachable. It symbolizes the title character's yearning for what is in his line of sight but remains out of his reach. After all, many things divide East Egg from West Egg beyond just a body of water, including class, social status, power, and more.

Green is one of the colors in The Great Gatsby that conveys symbolic meaning. It's important that this light is green, as green is the color of the "new money" that Jay now has and hopes will help him win Daisy's love.

The enormous mansion that Gatsby purchases with his newly gained wealth symbolizes the extravagance of the Jazz Age along with its emptiness. While he hopes that his ability to purchase the mansion will help him win Daisy's love, it's ultimately Daisy's cousin, Nick Carraway, who spends the most time with Gatsby. Nick lives next door to Gatsby.

The house provides a venue for Gatsby to show off his great wealth to the beautiful people but doesn't provide him with acceptance into the upper crust of society or the love of his golden girl, Daisy Buchannan.

There is a mantel clock in Nick's house. When Nick invites Daisy and Gatsby to tea at his house, the clock is a focal point during the interaction. Because Gatsby and Daisy had not seen each other for five years, the clock symbolizes the passage of time.

During the gathering, Gatsby almost knocks the clock off the mantel, which of course would have caused it to break. This symbolizes his desire to return to a previous time, the time when he and Daisy had been together, back to before she married Tom Buchanan, but when Gatsby did not have money. The clock also symbolizes Gatsby's hope for the present — that he now has what it will take to win Daisy's love.

While Gatsby's mansion is all but empty most of the time, he does frequently host glamorous parties. The parties occur so frequently throughout the book that they are actually a motif. The parties symbolize the glamourous lifestyle of the Roaring Twenties, the flashy spending of someone with "new money" seeking to impress those who will never accept him, and the corruption of the American Dream.

The parties are empty and meaningless, just as the guests are vain and empty inside. Most don't even know who Gatsby is but attend week after week to partake in the extravagance they believe represents the American Dream.

Cars have long been considered status symbols. With that in mind, the fact that Gatsby has a collection of cars shouldn't be surprising. They're yet another symbol of extravagance and emptiness, as one person can't possibly need as many cars as the title character owns. Of course, Gatsby's purchasing habits aren't about meeting his basic needs. His cars are not just a means of transportation.

The color yellow is used in the book multiple times, including with regards to Gatsby's bright yellow Rolls Royce. Yellow is an important symbol, because it's almost gold, but not quite. Daisy and Tom come from "old money" — the true gold of "real" wealth. Yellow symbolizes that even though Gatsby has money, it's not quite the same as what the upper class, born-into-money characters have.

Cheating is commonplace among the characters of the great Gatsby. It is a symbol of corruption. Marital infidelity seems rampant, with Tom Buchanan cheating on his wife Daisy with Myrtle Wilson and Daisy cheating on Tom with Gatsby. The guests at Gatsby's parties also seem intent on finding partners other than their spouses. That's not the only kind of cheating that's prevalent in the book, though. The moneyed class enjoys sporting activities, and cheating is also rampant in what really should be just a leisure pastime.

Readers see that cheating (corruption) is rampant among the upper class, and they get away with it time and time again. Not so for those who are poor. When Myrtle, who is lower-class, plays that game, she is not successful. Instead, she pays the ultimate price when she is killed in a hit-and-run in which Daisy was the driver.

The neglected billboard originally erected to promote Dr. T.J. Eckleburg's optometry practice serves as a symbol of corruption and a lack of values. The dominant element of the billboard is a person's eyes emphasized by a pair of eyeglasses, staring down at the motorists who zoom by on their way to doing whatever they want, without consideration for morality or ethics.

The book's characters drive past the billboard en route to engage in infidelity and other immoral acts. No matter where they go or what they do, the eyes are watching, yet no one seems to care. One character, Wilson, whose wife was having an affair with Daisy's husband, even equates the eyes on the billboard to being watched by God.

Symbolism and Theme in Literature