Beloved and Other Famous Books by Toni Morrison

An American writer, Toni Morrison published several prize-winning books before her death in 2019. Her writing is famous for its deep examination of the female black American experience. Find famous fiction, non-fiction, and children’s books by Toni Morrison. 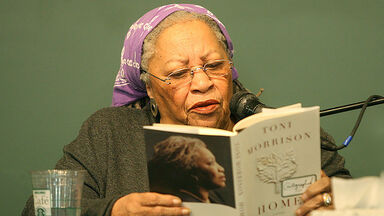 First published in 1987, the Pulitzer Prize-winning and New York Times bestseller Beloved tells the story of Sethe and her struggles with overcoming her past traumas as a slave. The award-winning novel was adapted into a movie in 1998.

Her first book released after her Nobel Prize in literature in 1993, the 1997 book Paradise displays the heart-wrenching violence that befalls the community of Ruby, an all-black town. Toni Morrison weaves a shocking tale with her first lines, “They shoot the white girl first. With the rest, they can take their time.”

Follow the story of Sula Peace and Nel Wright in Sula (1973). Inseparable friends turn enemies by a seemingly unforgivable betrayal. Lose yourself in Morrison’s portrayal of two friends whose paths diverge and what that means for their future.

Published in 1981, Tar Baby takes you on a wild romantic ride with Jadine Childs and Son. With her poetic language, Morrison puts a new spin on a couple trying to find a place in this world when they come from different sides of the tracks.

Toni Morrison’s 1992 novel, Jazz, takes a startling look at a love triangle in 1920’s Harlem, which leads to murder. Explore how the resentment and Joe Trace feels lead him to murder his teenage lover Dorcas and the effect it has on his wife Violet. Morrison’s poetic images weave a seductive novel that blends love and angst.

The 2003 novel Love looks at the intersecting lives of three women. Not only does it examine the lives of the granddaughter to the widow of the deceased hotel owner, Bill Cosey, but it looks at how color and class affect these women in a fading beach town.

Toni Morrison’s 2008 novel A Mercy is a New York Times bestseller and named one of the best books of the year. Set around the 1680 slave trade, A Mercy takes you into the world of Florens, a young slave, her relationship with her mother, and her search for love.

In Home, you follow the journey of Frank Money, a Korean war vet, thrust into the racial tensions of America. Get lost in his journey as he tries to deal with the trauma of combat during a racially tense time while trying to save his abused sister.

Morrison dives into the issue of colorism in her 2015 novel God Help the Children. Set in the current day, this New York Times bestseller looks at the abusive relationship Bride has with her mother due to her dark skin.

Her first novel, published in 1970, The Bluest Eye dives into the bullying and teasing Pecola Breedlove suffers because of her dark hair, skin, and eyes. Through Pecola’s yearning for blue eyes, Morrison takes an in-depth look at beauty and conformity.

In addition to her imaginative fiction exploring racial injustices and the rights of black women, Morrison penned several non-fiction books.

Playing in the Dark: Whiteness and the Literary Imagination

The Source of Self-Regard

The Source of Self-Regard is a three-part nonfiction book exploring Toni Morrisons’ writing, speeches, and essays. Through her writings, she explores a multitude of social issues like wealth, race, and human rights.

The Origin of Others

Through a series of lectures, this non-fiction work explores the social construct of race and ‘otherness’. She examines the invention of ‘otherness’ and what it says about society.

Remember: The Journey to School Integration

To add to her literary repertoire, Toni Morrison also authored several children’s books that challenged traditional perspectives through unique characters and morals. Many were created with her son Slade.

Patty, Mickey, and Liza Sue live their lives in a box. Their prison and protection, the three are banished to the box because they can’t handle freedom. However, this ingenious group of kids are able to find a way to free themselves from their big box.

The Book of Mean People

In The Book of Mean People, illustrated by Pascal Lemaitre, Morrison looks at the universal question of good and evil. It helps children to explore what it truly means to be ‘mean’.

Using rich rhymes and colorful illustrations from Slade Morrison, Who’s Got Game illustrates a series of fables including ‘The Ant and the Grasshopper’ and ‘The Lion and the Mouse’. Using her vibrant writing style, Morrison reimagines these fables into exciting new tales.

Dive into a fun day with Nana in the story Peeny Butter Fudge with Toni and Slade Morrison. The entire story explores the unique bonds grandparents have with their grandchildren.

Little Cloud and the Lady Wind

Morrison takes the power of unity and teamwork to a whole new level in her story Little Cloud and Lady Wind. Through a little guidance from Lady Wind, Little Cloud finds the value in being with others.

With a library card and a yellow rain slicker, Louise sets out to the library. While there are scares along the way, the power of books opens her eyes to a whole new world.

The Imaginative Writing of Toni Morrison

Nobel and Pulitzer prize-winning author Toni Morrison penned several famous books during her lifetime. In addition to being award winners, they were promoted by famous historical figures like Barack Obama. Ready to explore more book lists? Explore the 15 best books to improve your vocabulary. The power of reading can open a world you never knew existed.