There are many examples of Lord of the Flies symbolism woven throughout the pages of this literary masterpiece by William Golding. Paying attention to them will help you develop a thorough understanding of the story itself, as well as its major themes and messages. 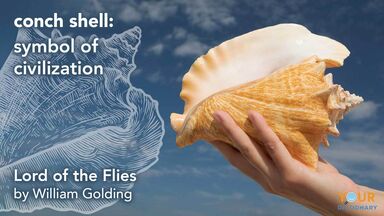 The place where the plane crashed into the island mars the previously undisturbed beauty of the island. It symbolizes the destruction mankind can ravage on nature and the Earth merely by coming into contact with it.

As the book progresses, the boys continue to have a negative impact on the island, expanding the initial damage of the scar from the crash. What does the island symbolize in Lord of the Flies? It is a symbolic Garden of Eden, a pristine land untouched by man. Once humans (the boys) arrive, its beauty begins to be destroyed and quickly becomes corrupted.

The book's characters themselves serve as examples of symbolism.

Piggy's glasses represent the ability to see accurately and understand things clearly. When the lens cracks, this is a sign indicating that the boys are losing sight of civilization. They are losing their previous vision of what life should be like and what actions they need to take in order to avoid losing their civility to savagery.

The conch shell is a symbol of civilization, specifically the law, order and rules that go along with civilization. It's used to maintain a sense of decorum when the group meets, as only the boy who has the conch is allowed to speak. It is passed around so that those who wish to speak up can do so. The others are expected to listen to the person who has the conch, so it represents a type of power. When the conch is destroyed, any semblance of civilization that remained was also destroyed.

The signal fire represents the boys' hope to reconnect to civilization. Early in the book, while the boys are hopeful of being rescued, the fire is very important. As they become comfortable with their lack of civilization, though, they focus more on the savagery of their life on the island than keeping the signal going in the hopes of being found. After all, they would have to give up their savage ways if they were rescued.

The mask represents the savagery of human nature. When the boys put it on, they feel empowered to act out their most basic instincts. It liberates them from the restrictions civilization places on human behavior. The fact that Jack felt compelled to put the mask on symbolizes that man's true nature is always trying to break through.

What does the beast symbolize in Lord of the Flies? It is a symbol of the darkness and evil that lurks inside of human nature. The boys perceive the beast as external to themselves and fear it when it really represents what is inside of them (which they should also fear). In that way, it is a symbol of how people actually do the very things they fear the most.

Jack impales the head of a sow on a stick, calling it a sacrifice to the beast. This pig head becomes the lord of the flies (hence the title of the book), functioning more as a physical manifestation of the beast rather than the sacrifice it was intended to be. It is a symbol of evil, reflecting both the evil within humanity and the devil himself. It is a biblical reference, as the word Beelzebub translates to the phrase "lord of the flies."

Finding Meaning Throughout Lord of the Flies

There are many examples of symbolism in literature; this book is no exception. When you read the book, be on the lookout for these examples of symbolism in the story, as well as other meaningful symbols in Lord of the Flies. The more tuned in you are to the story's symbolism, the better you'll be able to interpret the book. For even more insights into this book, explore some of the central themes of Lord of the Flies.