From ambition to guilt, the themes of Macbeth contribute to its standing as one of Shakespeare’s greatest tragedies. Themes, or underlying ideas throughout a work of literature, add layers of meaning to Macbeth. Studying them will give you a deeper understanding of this important literary work. 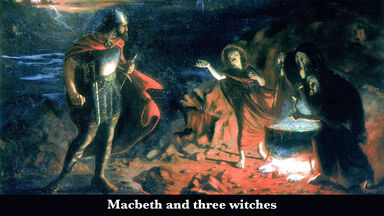 Theme of Ambition in Macbeth

One of the strongest themes in Macbeth is ambition and the destruction that can happen when hubris and greed for power go unchecked. The title character of the play Macbeth is a Scottish general who listens to the prophecy of three witches. The witches tell him he will become king, planting the seed of ambition in his soul. Together with his wife, Macbeth commits increasingly more violent acts to achieve his goal, sacrificing everything for ambition. Eventually, this pursuit of goals becomes Macbeth’s hamartia, or fatal flaw.

As the play progresses, the tension increases between ambition and what must be sacrificed to achieve a goal. At various points, Macbeth himself is aware of this tension, as you can see in these lines where he describes how he needs his ambition to succeed:

I have no spur

To prick the sides of my intent, but only

Vaulting ambition, which o’erleaps itself

At first, Macbeth is reluctant to resort to violence in service to his ambition, but with prompting from Lady Macbeth, he slides down the slippery slope of sacrificing others for his own ends. Lady Macbeth sees his reluctance and speaks about her own philosophy that power comes only to those who will set aside moral concerns:

Thou wouldst be great

Art not without ambition, but without

The illness should attend it.

Macbeth Theme of Appearance and Reality

Another significant theme in the play is the disparity between appearance and reality. How people perceive things, what their eyes see and what their own biases permit them to believe, is apparent throughout Macbeth. Even as the play opens, the witches speak to this theme, indicating nothing is what it may seem:

Fair is foul, and foul is fair.

Deception is a major part of Macbeth, which involves murder and cover-ups. When Macbeth kills Duncan, Lady Macbeth tells him they must both dress in their night clothes in order to appear innocent.

Lady Macbeth directly describes the importance of appearance and deception in Act I when she says the following:

To beguile the time,

But be the serpent under 't.

Theme of the Supernatural in Macbeth

Into the air; and what seem'd corporal melted

As breath into the wind. Would they had stay'd.

Later, Macbeth sees an apparition of a dagger, another element of the supernatural. He has difficulty determining whether the dagger is really there or is an element of his imagination:

"I have thee not, and yet I see thee still.

Art thou not, fatal vision, sensible

To feeling as to sight? Or art thou but

A dagger of the mind; a false creation,

Proceeding from the heat-oppressed brain?

Guilt is one of the most significant themes in Macbeth since the play deals directly with murder and other crimes. Macbeth’s guilt over the murder of Duncan and Banquo leads him to commit more crimes in order to cover up his acts. He is tormented by the guilt and concern over the consequences of his actions and loses his grasp on reality.

Lady Macbeth also feels guilt for her role in these crimes, and she tries to explain it away and give herself a clean slate:

However, she is unable to clear her conscience and continues to be tormented. She begins to go insane. When she speaks one of the most famous lines in the play, she is sleepwalking and dreaming that the blood of the king is on her hands and cannot be washed away”

Theme of Femininity and Masculinity

Femininity and masculinity represent another important theme of Macbeth. Specifically, Shakespeare explores how both genders are related to violence.

In one scene, Macbeth urges his hired assassins to kill Banquo by questioning their masculinity. In another, Lady Macbeth questions Macbeth’s manhood when he waffles on his decision to kill Duncan:

When you durst do it,

Then you were a man.

The play also explores how femininity and violence are related, painting the character of Lady Macbeth as just as ambitious and ruthless as her husband but much more deceitful in her actions. Lady Macbeth chafes at her restrictions, wishing to be less constrained by the expectations for her gender:

And fill me from the crown to the toe top-full

Theme of Fate and Free Will in Macbeth

Another very important theme of Macbeth is the role of fate and how it interacts with free will. From the very beginning, Macbeth is following a false prophecy that the witches presented. Is he fated to kill Duncan? Or does he simply believe it is his fate and use his free will to make it happen?
In Act I, Macbeth states that he thinks that if fate has plans for him, it will require no action from him :

If chance will have me king, why, chance may crown me,

However, as the play progresses, Macbeth takes an ever more involved role in his own destiny, continuously making ruthless choices in the service of ambition. His actions show that he doesn't want to leave his future up to chance, despite what he may have said initially.

Theme is one of the essential elements of story writing, and it adds depth and significance to Macbeth. Beyond being a compelling story, the play has wisdom to impart. Understanding the themes allows the reader to understand what Shakespeare wanted the audience to take away from his work. Learn the main themes in Romeo and Juliet, another tragic Shakespearean classic.