William Shakespeare, also known as the Bard, is responsible for some of the most famous and beloved plays and poetry ever written in the English language. His most well-known works include Romeo and Juliet, A Midsummer Night's Dream, The Taming of the Shrew, Macbeth, and Hamlet. Take a look at these lists of Shakespeare's plays, as well as some interesting historical information about the writer himself. 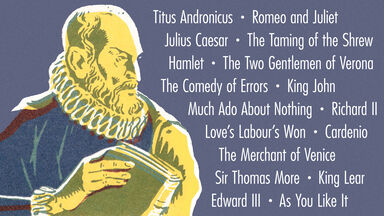 The Plays of William Shakespeare
Advertisement

The three types of plays Shakespeare wrote are tragedies, comedies, and histories. Tragedies are often marked by death and sadness, while comedies include happy endings (and often a wedding). Histories reflect a dramatization of historical monarchs and periods of time from Shakespeare’s perspective.

Although the exact dates that Shakespeare penned each of his plays can't be known, the Royal Shakespeare Company provides us with estimates (indicated in parentheses below). The first collected edition of Shakespeare's plays were published in 1623 as the First Folio.

William Shakespeare knew how to strike a chord in the tragedy department. Following the Greek tragedy tradition, characters in Shakespearean tragedies often have tragic flaws that lead to their ultimate downfall. Here are the tragedies penned by Shakespeare:

In the context of Shakespearean plays, "comedy" doesn't necessarily mean it's funny (though it often is). It can just mean there is a happy ending, usually involving a wedding. Shakespeare filled theaters with some of these comedies:

There's no doubt Shakespeare found the royal court to be something of an enigma. He crafted tales of betrayal, love, and murder, all within the king's court. We can learn a lot about this period in time through these plays:

There are a few plays that Shakespeare may have authored or co-authored, as well. These plays were either lost or simply not positively identified as his work. They include:

In the 17th century, plays had to be registered before they could be published, essentially so that they could be censored. Shakespeare never published any of his plays, so none of them were registered. Some of them were published by unauthorized publishers (because there were no copyright laws at the time), but other than that, they were only performed until about seven years after Shakespeare's death on April 23, 1616.

Evaluating the Success of Shakespeare's Plays

One indication of his success would be the constant production of his plays. Shakespeare was born in 1564 and died in 1616. During that time, he had at least one play, if not more, in production every year from 1592 until 1613. In fact, because the dates for events in Shakespeare's life are fuzzy due to lack of written data, some scholars have speculated that he may have had plays in production even in the late 1580s as well.

Theaters showed performances of plays shortly after they were written. This means that Shakespeare constantly penned new material to entertain his public that eagerly attended his many performances.

Famous Actors of the Time

From 1594, only an acting troupe known as Lord Chamberlain's Men, later renamed King's Men, performed Shakespeare's plays. These men were some of the most famous stage actors at the time – and without their performance, Shakespeare’s plays may never have found their place in history. They include:

Actors built the Globe Theater themselves. A dispute with the owners of the previous land where the theater was located caused many of the acting company to tear down pieces of the theater and reconstruct it on the Thames River. Circular in shape, the theater accommodated patrons from the lowest tier, who paid a penny and sat on the floor, to the highest tier, who paid more and sat in balconies.

Different levels of British society came together to enjoy the only entertainment of the time: plays. Shakespeare and the King's Men made court appearances for Queen Elizabeth I and King James I.

Shakespeare chose many themes for his plays that would entertain audiences compared to some other plays of the day based on morality issues. Shakespeare wrote primarily comedies in his early career, then his tragedies, followed by his tragicomedies or romances. By producing good writing on topics of interest to people, Shakespeare had many loyal fans.

However, Shakespeare's plays spoke to the common man by tapping into the ideas and interests shared by many. Since his death, Shakespeare has continued to inspire many people who read his work.

Love him or hate him, it's easy to make the case that Shakespeare was one of the greatest writers the world has ever known. Not only did he pump out an enormous volume of writing, but he also wrote plays that the crowd adored.

Would you believe he didn't stop with this massive list of plays? He was also a masterful poet. Shakespeare is renowned for having mastered the art of the sonnet. Whether you go on to enjoy his plays or his sonnets – or both – learn more about Shakespearian language with a Shakespeare translator. It'll help you transport back to a world where you could attend a play for a penny.