The Story of an Hour: Core Themes Explained 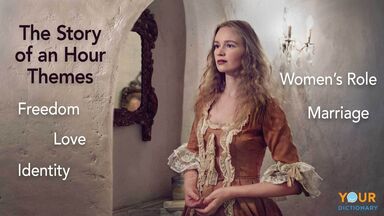 The Story of an Hour theme examples
Advertisement

The Story of an Hour Summary

The Story of an Hour by Kate Chopin is a short story about a woman, Louise, who learns of the death of her husband, Brently. In a small window of time, you see her inevitable grief and new independence come to light. However, those new dreams of freedom are quickly dashed the moment her husband Brently comes through the door. The heart disease alluded to at the beginning of the story is given as the cause of her death. But in truth, it's the devastating loss of her freedom.

The Story of an Hour Theme of Freedom

One of the clearest themes found in The Story of an Hour is the theme of freedom. Once the grief of finding out her husband died passes over her, Louise begins to realize that with his passing she has the freedom to live her own life. You can see the moment this realization hits as she whispers, “free, free, free.”

Louise comes to the realization she is free to live her life the way she chooses. No longer is she shackled to a marriage, but she gains a new independence. This independence to live life as she chooses brings a renewed sense of hope. Chopin solidifies this theme through actions like “her pulse beats fast,” “blood warmed” and “monstrous joy.” As a reader, you feel the new possibilities springing up in her and breathe new life into her.

Louise begins to revel in what this new freedom can bring her and embrace it. When she leaves the room to go with her sister, she isn’t the shadow of the woman she entered the room as but renewed. However, all her hopes are dashed when her husband walks through the door. In that moment, the dreams she’d begun to embrace are crushed, leading to her death.

The Story of an Hour Theme of Identity and Women's Roles

The Story of an Hour was written in 1894. The timeframe of this writing played into the theme of identity and the role of women. During that timeframe, even well-off women like Louise had little choice over their lives. They had specific expectations to meet, and their lives were ruled over by their husbands.

Though Louise is hinted at being a very intelligent woman, she had no control over her life and decisions because of the time period. If she were to get a job, she would make considerably less than men and only have specific positions available. Additionally, she was expected to complete specific duties at home like cooking and cleaning. Therefore, she has no real identity of her own. When she finds out Brently has died, the promise of becoming her own person and gaining her own identity fills her with joy.

During the early 1900s, women like Louise were considered to be weak. This weakness is further exacerbated by Louise’s heart condition. But it also works to show you that during that time women should be passive, subservient and unexcitable. Therefore, women had to try to mold themselves into this role, leading many times to depression and other issues. The force from Louise trying to be that person has made her weak and fear life as you can see through the lines:

Chopin also shows how freedom is not a realistic dream in 19th-century society for women through the way Louise’s dream is crushed when Brently walks through the door.

The Story of an Hour Theme of Marriage and Love

The final theme found in this story is love and marriage. Louise’s marriage isn’t completely loveless. You can see this through the way she cries and is devastated when finding out he’s died. She also states it explicitly, “she had loved him — sometimes.” Therefore, it wasn’t a loveless marriage that ultimately crushed Louise, it was the shackles of servitude marriage brought with it at that time for women. You can clearly see this in the line, “There would be no powerful will bending hers in that blind persistence with which men and women believe they have a right to impose a private will upon a fellow-creature.”

Themes of The Story of an Hour

For a short story, The Story of an Hour contains some powerful themes. From commenting on marriage to the role of women, Chopin provides readers with a clear message of women in that area. Explore more about themes by looking at theme examples.