What Is the Main Theme of The Outsiders?

The Outsiders by S.E. Hinton is a story of love, hate, friendship, and brotherhood. While there are many themes found in the enduring novel, there is one theme that appears over and over again. So what is the theme of The Outsiders? Keep reading for examples of the main theme of the novel as well as important secondary themes. 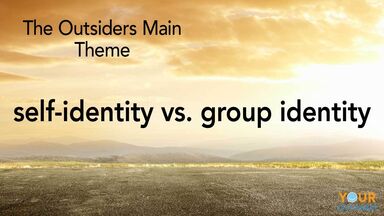 main theme of the outsiders
Advertisement

The Most Prominent Theme of The Outsiders

The main theme of The Outsiders is self-identity vs. group identity. There is evidence for this theme in the title itself, as the Outsiders form their own group (the greasers) because they feel they're on the outside of society. However, Ponyboy still feels like an outsider in many ways and struggles with his identity in and out of the greaser gang.

"We're poorer than the Socs and the middle class. I reckon we're wilder, too. Not like the Socs, who jump greasers and wreck houses and throw beer blasts for kicks, and get editorials in the paper for being a public disgrace one day and an asset to society the next. Greasers are almost like hoods; we steal things and drive old souped-up cars and hold up gas stations and have a gang fight once in a while."

Ponyboy sees the clear differences between the gangs at the beginning of the book. However, his opinion becomes less clear cut after he meets Socs who don't fit his definition, such as Cherry Valance and Bob Sheldon, whom Johnny killed to save Ponyboy.

"The silence grew heavier, and I could hear the harsh heavy breathing of the boys around me. Still Darry and the Soc walked slowly in a circle. Even I could feel their hatred. They used to be buddies, I thought, they used to be friends, and now they hate each other because one has to work for a living and the other comes from the West Side. They shouldn't hate each other... I don't hate the Socs any more ... they shouldn't hate ..."

It becomes more and more difficult for Ponyboy to justify the difference between the gangs when he realizes it's not so black and white. Ponyboy learns more about himself as he changes his definition of both gangs toward the end of the book.

As the narrator, Ponyboy describes his fellow greasers in very individualistic ways. He talks about his brother Darry's protective, no-nonsense nature, his other brother Sodapop's good looks and unique personality, his friend Johnny's nervous but kind nature, and all the other greasers in admiring detail. But Cherry Valance thinks that he's different from the other greasers:

"Cherry sighed. 'You two are too sweet to scare anyone. First of all, you didn't join
in Dallas's dirty talk, and you made him leave us alone. Aid when we asked you to sit up here with us, you didn't act like it was an invitation to make out for the night. Besides that, I've heard about Dallas Winston, and he looked as hard as nails and twice as tough. And you two don't look mean.'

'Sure,' I said tiredly, 'we're young and innocent'

'No,' Cherry said slowly, looking at me carefully, 'not innocent. You've seen too
much to be innocent. Just not... dirty.'"

After Bob Sheldon dies, Ponyboy and Johnny are on the run from the law — and the rest of the Socs. They bleach their hair and go into hiding away from their fellow greasers. Their experience together establishes how different they are from their gang, which they can embrace when they're far away.

"Johnny looked at me quickly. 'I didn't mean nothing. I meant, well, Soda kinda looks like your mother did, but he acts just exactly like your father. And Darry is thespittin' image of your father, but he ain't wild and laughing all the time like he was. He acts like your mother. And you don't act like either one.'

'I know,' I said. 'Well,' I said, thinking this over, 'you ain't like any of the gang.
I mean, I couldn't tell Two-Bit or Steve or even Darry about the sunrise and clouds and stuff. I couldn't even remember that poem around them. I mean, they just don't dig. Just you and Sodapop. And maybe Cherry Valance.'

Johnny shrugged. 'Yeah,' he said with a sigh. 'I guess we're different.'

'Shoot,' I said, blowing a perfect smoke ring, 'maybe they are.'"

Ponyboy and Johnny are able to see the similarities between the greasers and the Socs more clearly than anyone else. They contrast their sensitive personalities to the personality of a typical greaser — but after Johnny dies, the greasers' reactions show that none of them, even Dally the troublemaker, really identify as the "hoods" they pretend to be.

Ponyboy's fondness of sunsets and poetry, particularly Robert Frost's "Nothing Gold Can Stay" catches Johnny's attention while they're hiding out together. While the other greasers think that Ponyboy is odd for liking beautiful things, Johnny appreciates this part of his friend. He remembers the moment on his deathbed, and writes Ponyboy a note about it:

"I've been thinking about it, and that poem, that guy that wrote it, he meant you're gold when you're a kid, like green. When you're a kid everything's new, dawn. It's just when you get used to everything that it's day. Like the way you dig sunsets, Pony. That's gold. Keep that way, it's a good way to be. I want you to tell Dally to look at one. He'll probably think you're crazy, but ask for me. I don't think he's ever really seen a sunset. And don't be so bugged over being a greaser. You still have a lot of time to make yourself be what you want. There's still lots of good in the world. Tell Dally. I don't think he knows. Your buddy, Johnny"

Johnny's last words to Ponyboy are "Stay gold, Ponyboy. Stay gold ..." in defiance of both the poem's title and the greasers' expectations. He's advising Ponyboy to stay innocent and to keep his unique personality, not to become part of a group identity.

Secondary Themes of The Outsiders

While there is lots of textual evidence for the theme of group identity vs. individual identity, there are several more themes found in The Outsiders. Ponyboy learns many lessons over the course of the story that form the novel's full message.

Like all well-written stories, The Outsiders uses literary themes to establish characterization and tone. But do you know the difference between theme and other literary devices? Compare theme and motif with these explanatory examples. Or, learn how to write a clear and meaningful theme statement for your next language arts essay.