Learn these common medieval terms if you want to go beyond talking like Shakespeare and have some fun with archaic words. A few are still in use, but many of these words and phrases will be unfamiliar to modern English speakers. 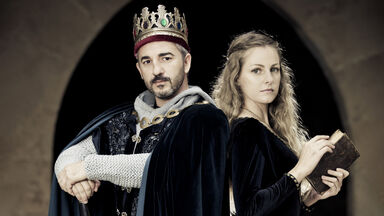 When it comes to what medieval men and women were called, the answer is complicated. Factors like whether they owned land and had noble blood affected what they were called. These are a few common medieval terms for people:

You can see some of these terms used in a real medieval text in this example from The Statute of Laborers, written in 1351:

Provided, that in thus retaining their service, the lords are preferred before others of their bondsmen or their land tenants: so, nevertheless that such lords thus retain as many as shall be necessary and not more; and if any man or woman, being thus sought after in service, will not do this, the fact being proven by two faithful men before the sheriffs or the bailiffs of our lord the king, or the constables of the town where this happens to be done,-straightway through them, or some one of them, he shall be taken and sent to the next jail, and there he shall remain in strict custody until he shall find surety for serving in the aforesaid form.

Medieval Words for Food and Cooking

Food played an important role in medieval life, and there are a number of common terms for breads, stews, and other foods:

You can see one of these terms in use in The Canterbury Tales by Geoffrey Chaucer:

When will the gaoler bring us out pottage?

Is there no crumb of bread that you did keep?

There are a number of medieval terms for land and distance measurement, some of which, like “acre,” are still in use today.

You can see one of these terms used in medieval documents, such as Assize of Clarendon, written in 1166:

In the first place the aforesaid king Henry, by thee counsel of all his barons, for the preservation of peace and the observing of justice, has decreed that an inquest shall be made throughout the separate counties, and throughout the separate hundreds, through twelve of the more lawful men of the hundred, and through four of the more lawful men of each township, upon oath that they will speak the truth….

Surprisingly, people have only been using the word “hello” since 1832, according to The History of Early English, but they have been greeting one another for far longer. They have also been expressing their affection in words. These are a few Middle English greetings and medieval terms of endearment:

You can see several examples of greetings in The Canterbury Tales by Geoffrey Chaucer, including this line:

Medieval English Is Fascinating and Fun

Whether you’re attending a Renaissance fair, trying to get some context for reading a Middle English text, planning a medieval wedding, or just curious about the customs of your ancestors, learning about common medieval terms is fascinating and fun. For more interesting phrases that are still in use today, take a look at expressions we owe to Shakespeare. Despite writing just after the end of the medieval period, he offers some great vocabulary words that were likely in use during the Middle Ages as well.