Pennsylvania, Belize, Australia, and Kentucky have one thing in common: They’re all commonwealths (or parts of a commonwealth). In the United States, there are four states that are officially commonwealths. But does it matter if you call them a state? 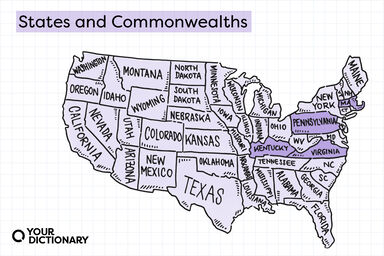 U.S. Map showing which states are commonwealths vs states
Advertisement

The Difference Between States and Commonwealths

Which U.S. States are Commonwealths?

The U.S. states that are called commonwealths in their constitutions include:

Massachusetts, Pennsylvania, and Virginia were among the 13 original colonies of America, while Kentucky was part of Virginia until it became the 15th state in 1792. After the Revolutionary War, these former colonies became some of the first states admitted into the Union of the United States.

How to Use Commonwealth vs. State in the U.S.

When talking about Virginia, Massachusetts, Pennsylvania, and Kentucky, you can still call them states rather than commonwealths.

Some examples of how to distinguish between the words commonwealth and state and their historic uses include:

What Does Commonwealth Mean?

The word commonwealth comes from a traditional English term used by political philosophers such as John Locke and Thomas Hobbes. It describes a community that exists for the common good or welfare of its members, rather than the enrichment of a colonial power.

Because commonwealth conveyed more anti-monarchical sentiment than the word state, many preferred it over the term state after the American Revolution.

Commonwealth Confusion in the U.S.

The terms state and commonwealth are sometimes used interchangeably, which explains why Virginia is home to both Virginia State University and Virginia Commonwealth University. Similarly, Kentucky has a Secretary of State while Virginia, Massachusetts, and Pennsylvania have Secretaries of the Commonwealth.

Commonwealth Territories of the U.S.

These four states aren't the only American commonwealths. Commonwealth can also describe an unincorporated territory of the United States that has its own constitution and, what the Department of the Interior calls, "a more highly developed relationship" with the federal government.

The Commonwealth of Puerto Rico

The Commonwealth of Puerto Rico was established with the ratification of its constitution in 1952. While Puerto Ricans are considered citizens of the United States, they have slightly different rights than citizens of the 50 states.

The Commonwealth of the Northern Mariana Islands

The Commonwealth of the Northern Mariana Islands (CNMI) was established in 1975, and residents of the CNMI became U.S. citizens in 1986. Like Puerto Rico, it is a U.S. territory but not a state.

Citizens of the Northern Mariana Islands can vote in presidential primaries, but not in the general election. Also like Puerto Rico, the territory does not have any voting members in the House of Representatives, but a delegate who can participate in discussions on policy represents its citizens.

What Is the British Commonwealth?

North America isn’t the only place on Earth to hold a commonwealth. The largest commonwealth in the world is the Commonwealth of Nations, commonly known as “the Commonwealth.” It consists of 56 member states in continents around the world, most of which were once part of the British Empire.

Prominent members of the Commonwealth include:

Fifteen of these states are known as Commonwealth Realms, which recognize the King or Queen of England as their head of state. In the 21st century, around 2.5 billion people (nearly one-third of the world’s population) live in the Commonwealth.