During the Old English period (approximately A.D. 500 to A.D. 1066), Old English literature introduced many classic words to the English language. These words may not be in popular use today, but they have strongly influenced the way we speak in the 21st century. Check out dozens of Old English words and their modern definitions that you can try out in your everyday conversation. 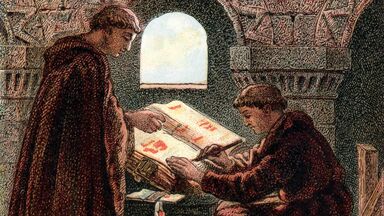 Words from Old English vocabulary are mainly found in literature and poetry prior to the Norman invasion of 1066. After this period, Middle English became the main representation of the English language before transitioning to the modern English we know today.

You may notice that many of these words sound similar to their modern meanings, such as "preost" for "priest" and "woruld" for "world." It goes to show you that even 1000 years later, many elements of a language stay the same!

How did Old English speakers describe the world around them? These Old English adjectives and adverbs helped scribes to tell vivid, descriptive tales of dragons and heroes.

Notice how words like "right" and "bright," which seem oddly spelled in modern English, are spelled in Old English: "ariht" and "beorht." The -ht ending that seems so confusing to us today fit right into the Old English language.

Old English literature is famously dramatic, mainly due to the incredible actions of its characters. Take a look at these verbs in the infinitive form that depict what characters (and regular people) did in the Old English period.

A literary canon of the Old English period is the epic poem Beowulf, which was written between 975 and 1025. The poem is nearly incomprehensible by modern English standards but has been closely translated by Old English scholars.

The first 11 lines of the original Old English version read as follows:

Beowulf has been translated over 600 times in the last millennium. It was first translated into modern English in 1805, eventually becoming a version that reads this way:

"Listen! We — of the Spear-Danes in the days of yore,
of those clan-kings — heard of their glory,
how those nobles performed courageous deeds,
Often Scyld, Scef's son, from enemy hosts
from many peoples seized mead-benches;
and terrorized the fearsome Heruli after first he was
found helpless and destitute, he then knew recompense for that:
he waxed under the clouds, throve in honours,
until to him each of the bordering tribes
beyond the whale-road had to submit,
and yield tribute: that was a good king!"

It's amazing to think that these two poems are saying the same thing, let alone that they are versions of the same language. The English language has changed quite a bit in the past 1000 years, but Beowulf is an example that a great story never gets old.

Influence of Other Languages on Old English

Many of the Old English words also came from the influence of the Romans and Greeks. These words were borrowed by the Germanic conquerors and incorporated into Old English. For example, the following words were adapted from the Romans, Greeks and from Latin:

While the spelling is different, the meanings all follow the original words and correspond to the modern meanings.

As the need arose for new words for things that the Germanic conquerors were unfamiliar with, they would make up words rather than take Germanic words as descriptors.

Two examples of this are the words for astronomy and arithmetic. The invaders made up the words based on the root word "craeft" which meant an art or science.

Old English in a New World

Now you know some Old English words and their meanings, and have a better understanding of the sources of our language. Even though these words only look vaguely familiar, they are an important part of our linguistic history. Take a step forward in time from Old English with these words from Middle English (A.D. 1100 to A.D. 1500). Or if you're interested in etymology, take a look at a list of English words of German origin.