Rosa Parks has been called "the first lady of civil rights" and “the mother of the civil rights movement,” but do you know what she did to earn those titles? Learn some amazing Rosa Parks facts about her famous stand for civil rights and the changes that she helped make for Black Americans. 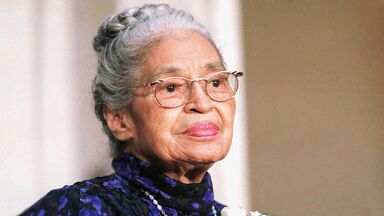 What Is Rosa Parks Famous For?

In the 1950s, Black people and white people were segregated, or separated, based on the color of their skin. This applied to many public places, including the bus. In December 1955, Rosa Parks made headlines for not giving up her seat to a white person on a Montgomery, Alabama bus. This simple but revolutionary action inspired the local Black community to form the Montgomery Bus Boycott. The boycott was led by young Rev. Dr. Martin Luth King, Jr. and lasted for over a year.

Rosa Parks lost her job and was later arrested and lost her trial. However, her bravery had not been in vain. In 1956, the U.S. Supreme Court ruled that bus segregation was unconstitutional and struck down laws requiring segregated seating on buses. While this is Rosa Park’s most well-known impact, it is just one of several achievements in the impressive life of this legendary civil rights activist

1. She Finished High School in a Time When Many Didn’t

2. She Had a Long History of Activism

Before her famous stand on the Montgomery bus, Rosa Parks was involved in fighting for all Americans' civil rights. This stemmed from seeing the Ku Klux Klan (KKK), a white supremacist terrorist group, in her youth with her father and grandfather. Though Rosa Parks was arrested in 1955, she’d been a member of the National Association for the Advancement of Colored People (NAACP) since 1943.

3. She Was Secretary for the NAACP

Years before becoming a leader in the civil rights movement, Rosa Parks worked behind the scenes at the NAACP. The NAACP was established in 1909 and endures today to advance justice for Black Americans. Rosa Parks was a secretary for the Montgomery NAACP beginning in 1943.

She attended leadership training and even founded the Montgomery NAACP Youth Council. Eventually, she became E.D. Nixon’s secretary. Nixon was a civil rights leader in Alabama and played a crucial role in the Montgomery bus boycott. During her time with the NAACP, Parks helped investigate brutality and discrimination cases.

While her 1955 arrest is the most famous, it was not the first time Rosa Parks had gotten in trouble with the law for taking a stand. James Blake, who drove bus 2857 which Parks was arrested on, had her arrested before for refusing to enter in the back of the bus.

However, Parks didn’t notice that he was driving that day in 1955. In her 1992 biography, she stated that if she’d seen Blake was driving, she wouldn’t have gotten on. However, when she was asked to move from her seat, she made a split-second decision to refuse because she was tired of the inequality.

5. She Was Not the First Woman to Refuse to Give Up Her Seat

Though Rosa Parks is most famous for not giving up her seat and sparking a revolution, she wasn’t the first Black person or woman to refuse to give up her seat. Earlier in 1955, 15-year-old Claudette Colvin refused to move from her seat after learning about activists during Black history in her school. Colvin claimed it was her constitutional right to remain in the seat before being arrested. Colvin’s bravery paved the way for Rosa Parks, the Montgomery Bus Boycott and the civil rights movement.

6. She Was Sitting in the ‘Colored Section’ of the Bus

7. Her Bravery Cost Her

In addition to her work with the NAACP, Parks was a seamstress. Rosa Parks' civil rights activism hurt her husband and her life. Not only did they receive death threats and lose their jobs, but they were forced to move to Detroit, Michigan to find work. During this time, she remained an active member of the NAACP.

8. She Was a Government Secretary

After moving to Detroit, Rosa Parks worked as a secretary for U.S. Representative John Conyers from 1964 to her retirement in 1988. She worked with the secretary to further civil rights and other matters for Americans and help the homeless find housing. She was even active in working to end apartheid in Africa in the 1980s.

9. She Started an Institute

Rosa Parks started a foundation in collaboration with Elaine Steele to honor her husband, Raymond Parks. The Rosa and Raymond Parks Institute for Self Development became a reality in 1987. This organization promotes the career development, job opportunities and development of youth and seniors through multiple programs.

Not only is Rosa Parks considered “the mother of the civil rights movement,” but she received national recognition for her fight in the struggle against racial inequality. Some of her achievements include:

Though Rosa Parks wasn’t the first to take a stand, she was the woman the NAACP needed to spark a revolution. Read some Rosa Parks quotes to see how her words are still influential today. The boycotters of her time, including leaders like Martin Luther King, Jr., propelled the civil rights movement into the spotlight. Learn more about civil and why they matter.