Albatrosses are magnificent creatures that spend the vast majority of their lifetimes in the sky, over water. Learning some key albatross facts is a great way to strengthen your appreciation for these lovely seabirds. 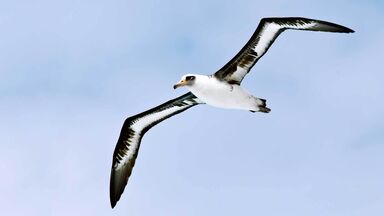 Life Expectancy of 40 Years or More

Albatrosses have a much longer life expectancy than most other birds or wild animals. Laysan albatrosses, for example, generally have a lifespan of between 12 and 40 years, though there is documentation that it is possible for these birds to live much longer.

In 1956, researchers banded a young Laysan albatross named Wisdom. In 2018, biologists from the United States Fish and Wildlife Services sighted her at Hawaii's Midway Atoll National Wildlife Refuge. Rather than showing signs of wear and tear, the 68-year-old bird and her partner were tending a newly hatched egg.

Largest Wingspan of All Birds

Great white pelicans come in just shy of the wandering albatross, with a wingspan that is only slightly less expansive (3.6 meters, which is still roughly 12 feet). They are closely followed by other albatross species with regards to wingspan measurements. The smallest albatross species have wingspans ranging from six to eight feet wide.

Some Grow to Over 4 Feet Tall

Albatrosses Stay Airborne Most of the Time

Albatrosses put their enormous wingspan to great use, staying airborne most of the time. They spend the vast majority of their time in the air, flying and soaring. They can fly as fast as 50 miles per hour (mph). Scientists have documented that some albatrosses have flown all the way around the world in as few as 46 days. For the most part, albatrosses stay in the sky except for when they are laying eggs or waiting for their chicks to hatch.

Albatrosses Have an Excellent Sense of Smell and Sight

Because albatrosses rarely land, it makes sense that their diets consist of things they pluck from the water. However, they can't dive deep into the water. Instead, they have to rely on what they can find within the first few feet of water. They search from the sky to spot their prey. In addition to excellent eyesight, they have an extremely well-developed sense of smell that helps them hone in on potential food sources as they dive. They mostly eat krill, squid, small fish, and crustaceans. They will also eat carrion (dead animals) that they find floating on the surface of the ocean.

Albatrosses are monogamous birds. Mate selection is not rushed with albatrosses. The females tend to choose their mates. It can take as long as 15 years to select a mate. Once a pair is formed, the partners develop a language unique to their coupling. The partners don't stay together all the time, but they reconnect when it is time to mate and go back to the same nest. If one of a bonded pair dies, it is very rare for the surviving member to find another partner.

Just One Baby at a Time

Albatrosses lay just one egg at a time and no more than once per year. It is unusual for an albatross to lay an egg two years in a row, but it can happen. However, it is most likely that an albatross will skip a year in between eggs. Most albatross species create nests for their eggs, though some just use the bare ground. Both parents participate in incubating the egg, taking turns through what can be up to 80 days before the chick hatches.

Both Parents Raise Their Young

Albatross babies are called chicks. They require brooding for three weeks after hatching, with both parents participating. After brooding, the parents take turns foraging for food to bring back to the young albatross. It takes young albatrosses a long time to get to the point where they can fly. It can take up to 280 days for the larger species to fledge, which is when they become able to fly. Smaller species can fledge in as few as 140 days. Upon fledging, young albatrosses no longer have to depend on their parents for food.

Most Albatross Species Are Endangered

Albatrosses Can Be Viewed in Many Places

For anyone who enjoys birdwatching, viewing albatrosses in flight is likely to be a bucket list travel adventure. These majestic creatures can be viewed in many parts of the world. Antarctica, New Zealand and the Galapagos Islands are great places to catch glimpses of albatrosses, as are Chile, Peru and Japan. In the United States, Northern California and Hawaii are good places to see these enormous seabirds. These are just a few examples of the many places that are ideal for albatross watching.

Albatrosses, especially black-footed albatrosses, are sometimes also known as (aka) gooney birds. No one is really sure why this name is used; it's just an informal name for these large and lovely seabirds.

From Albatross Facts to Exploring the Oceans

Now that you know some facts about birds that spend most of their lives over the ocean, it's a great time to learn more about major bodies of water. Get started by reviewing some examples of oceans and seas. If you prefer to learn more about other cool animals, read up on some weird animal facts.