Memorial Day is a national holiday in the United States of America. It is a special time set aside to remember service members who gave their lives in service of the country. Discover some interesting Memorial Day facts, including historical information and traditional observances. 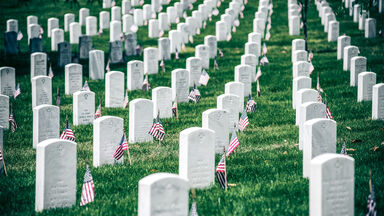 Memorial Day wasn't always referred to by that name. The observance was originally called Decoration Day. It was intended to be a day to decorate the graves of soldiers who lost their lives in the Civil War.

Decoration Days were held in a variety of localities, with different ones claiming to have started the practice. Many years after the observance began, the federal government declared a May 5, 1866 ceremony held in Waterloo, New York to honor Civil War Veterans to be when the holiday now known as Memorial Day was born. This is considered to be the first official Memorial Day, even though there are records of Decoration Day observances being held a few years earlier.

While the initial Decoration Day observances were held in only a few locations, they quickly spread to cities and states throughout the United States (U.S.) long before Memorial Day became a federal holiday. By the beginning of the 20th century, these observances had spread throughout the country, with many state legislatures issuing proclamations in honor of the day. These observances were sometimes called Memorial Day rather than Decoration Day. They were usually held on May 30.

Each Memorial Day, a ceremony of remembrance is held at Arlington National Cemetery, which is located in Arlington, Virginia. Approximately 5,000 people attend in person each year. The president of the United States usually makes a speech during this ceremony. Prior to the ceremony, small American flags are placed on each grave at the cemetery.

Arlington National Cemetery isn't the only place where fallen soldiers are laid to rest. The National Cemetery Administration of the U.S. Department of Veterans Affairs (VA) has over 150 cemeteries for veterans throughout the U.S. and its territories, as well as monuments to soldiers. Many states also have designated burial sites for veterans. Many of these sites hold wreath-laying ceremonies and honor veterans with other tributes, such as gravesite flags and buglers playing Taps.

Knowing how to properly display a flag on the fourth Monday in May is one of the most important Memorial Day facts. On Memorial Day, American flags should be lowered to half-staff during the morning hours. They should be flown in this position until noon, in mourning for soldiers' loss of life in battle. At noon, they should be raised to full staff and stay that way until sunset. This is done to honor America's heroes of battle.

Since 1989, the National Memorial Day Concert has been held the day before Memorial Day in Washington, D.C. This outdoor event is held just outside of the United States Capitol in Washington, D.C., which is home to both houses of Congress. It is free to attend, and the concert can also be viewed on television. It is broadcast by the Public Broadcasting Service (PBS) for public viewing. Military personnel stationed around the world can watch via the American Forces Network.

In December of 2000, the U.S. Congress passed the National Moment of Remembrance Act. This law encourages Americans to honor the memory of fallen soldiers by observing 60 seconds of silence at 3 p.m. on Memorial Day. It provides a way for Americans, no matter where they are or what they are doing, to pause for a brief time and formally remember those who gave their lives in wars fought to protect and preserve the American way of life.

In addition to its somber reason for existing, Memorial Day has also come to signify the unofficial beginning of summer. This is due to the fact that the observance falls near the end of May, when the weather is turning warm in most places. For many, it coincides with the end of the school year and the beginning of the summer holiday. As a result, it's not unusual for people to travel or schedule cookouts or pool parties over the long Memorial Day weekend. While individuals and families can certainly enjoy beginning-of-summer activities on Memorial Day, it's important to recognize the somber reason behind Memorial Day and to remember those who lost their lives in the pursuit of freedom.

Memorial Day is very different from Independence Day, which celebrates America's Independence and Veterans Day, which honors all veterans. This holiday is a day set aside to honor those who lost their lives in battle, participating in wars fought on behalf of the United States. Now that you are aware of the military basis for why Memorial Day is a national holiday, it's a good time to learn a bit more about the U.S. armed forces. Start by learning some military vocabulary words. Then, go beyond the basics to master a selection of military slang sayings.