12 Cheetah Facts: The Fastest Land Animal at a Glance

What do you know about cheetahs? They may be the fastest land animals on Earth, but there's even more to know about these fascinating predators. Keep reading for 12 amazing cheetah facts that every animal lover should know. 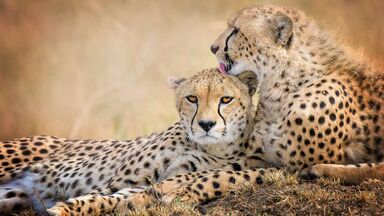 1. Cheetahs Are Perfectly Built for Speed

It's no coincidence that cheetahs have a recorded running speed of 68-75 miles per hour. Every part of their anatomy is built to be fast.

There's not much of a chance to get away if your predator is twice as fast as you are!

These big cats don't need much time to start a chase. Once they spot prey, cheetahs can accelerate to full speed in only three seconds. That's nearly as fast as the fastest sports cars in the world, including the Porsche 911 and the Ferrari LaFerrari.

Even though cheetahs are land animals, they look a lot like they're flying when they're running at full speed. The average stride of a cheetah is 22 feet, meaning that every part of its body stretches to its full length and all four paws come off the ground.

The distinctive markings on cheetahs' faces aren't just for decoration. Dark streaks around their eyes that resemble tear stains reflect the sun while they're hunting. Much like a football player uses eye black to see better on the football field, these marks allow cheetahs to see more clearly than the prey they are watching.

5. Cheetahs Are Not the Fastest Animals on Earth

Make no mistake: cheetahs are incredibly fast. But overall, they are the 11th fastest animals in the animal kingdom. Many birds of prey have mind-boggling flying and diving speeds, including the golden eagle (150-200 miles per hour) and the peregrine falcon (242 miles per hour), which is the fastest animal anywhere on Earth.

6. Cheetahs Can Only Run A Quarter Mile

If a cheetah were an Olympian, it would compete as a sprinter. Cheetahs spend a lot of time stalking their prey so that they're close enough to catch them in a short sprint. But if the chase lasts longer than 0.28 miles, cheetahs have to slow down and recover. Sometimes cheetahs are so tired after a hunt that they need to rest before they even eat their prey.

While other big cats are built to physically overpower their prey, cheetahs are made to outrun them. That means they don't have the strong jaws or muscles of their feline counterparts. Cheetahs likely wouldn't win in a fight with a lion or tiger — unless they could run away.

When you think of a big cat, you probably think of the majestic roar of a lion. In fact, every big cat except cheetahs has a loud, threatening roar. But all felines can be divided into two categories: roaring cats and purring cats. Lions can roar but they can't purr; accordingly, cheetahs can purr but not roar. Their noises are more like chirps, especially when communicating with other cheetahs.

Many big cats have two or three cubs per litter. But cheetahs have up to six cubs per litter, and litters of eight have also been recorded. Some zoologists believe that cheetahs have more cubs because they are less capable of defending their young than other cats. When danger strikes, cheetahs run — often leaving their offspring behind.

Baby cheetahs have long hair down their backs, known as a mantle, that camouflage them with the tall grass of the savanna. It's especially helpful to these cubs, possibly because their mothers aren't equipped to take care of them, and also because it makes them look a lot like the predatory honey badger. As cubs get older, these manes darken and then disappear.

11. The American Cheetah Is Extinct

The African cheetah is not the only cheetah to have existed on Earth. A species of cheetahs went extinct in North America at the end of the last ice age around 12,000 years ago, at the same time as the American mammoth and lion. Researchers don't know if this ancient cheetah was as fast as its African cousin, but it was better equipped for climbing in the North American mountains.

Sadly, the African cheetah population has been severely reduced in the last few decades. They are listed as "Vulnerable" on the International Union for Conservation of Nature Red List, and "Endangered" under the United States Endangered Species Act. Their loss of habitat, poor rate of cubs reaching adulthood, and danger from poachers and illegal pet traders have caused their numbers to dwindle. Additionally, cheetahs are often shot by farmers protecting their livestock.

Cheetahs Are Part of Their Ecosystem

Like many animals around the world, cheetahs are especially challenged by human presence in their habitat. That's why it's important to protect them; the loss of one species can spell disaster for the rest of the ecosystem. Continue exploring African animals by learning some fun facts about giraffes.

Now that you know some interesting facts about cheetahs, learn more about how ecosystems work with these examples of natural ecosystems in biology. Or, take a look at how other animals are suited to their surroundings with 15 unique examples of animal adaptations.