The dark beauty of Emily Dickinson's poetry reflected a mind that was preoccupied with death. But there was so much more to Dickinson's life than can be found in her prolific body of work. Keep reading to learn 12 Emily Dickinson facts that you may not know about the famous writer. 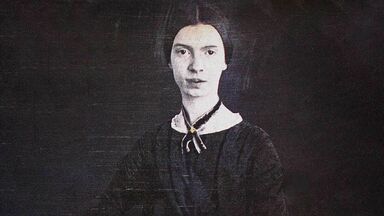 Only 10 Poems Were Published in Her Lifetime

Emily Dickinson (1830-1886) wrote over 1,800 poems in her 56 years of life. However, only ten of those poems saw the light of day in publication, including "Sic transit gloria mundi" and "Magnum bonum, harem scarem." The published poems were heavily edited to fit the rules of poetry Dickinson purposely broke. None of the poems were published in her name, and most were likely submitted by friends and fellow writers.

She Dropped Out of Seminary After 10 Months

Dickinson spent seven years at Amherst Academy, from ages 10 to 17. Her letters from that time period indicate that she enjoyed her time there and made friendships that lasted her whole life. However, she left Mount Holyoke Female Seminary before finishing her first year.

“This term is the longest in the year and I would not wish to live it over again, I can assure you. I love this Seminary and all the teachers are bound strongly to my heart by ties of affection. There are many sweet girls here and dearly do I love some new faces, but I have not yet found the place of a few dear ones filled, nor would I wish it to be here."

Possible reasons for her departure range from poor health, homesickness, discomfort around the strong Christian influence, and her father's controlling behavior. No matter the reason, it would be the last time Emily would live away from her family home.

She and Her Brother Loved the Same Woman

Much of Emily Dickinson's writing is addressed and dedicated to "Sue" or "Susie." Susan Huntington Gilbert, whom Emily met at Amherst, became a dear friend and object of affection of Dickinson's. She appears in Dickinson's most passionate writing:

"I need you more and more, and the great world grows wider… every day you stay away — I miss my biggest heart; my own goes wandering round, and calls for Susie… Susie, forgive me Darling, for every word I say — my heart is full of you… yet when I seek to say to you something not for the world, words fail me… I shall grow more and more impatient until that dear day comes, for til now, I have only mourned for you; now I begin to hope for you."

Gilbert had another person's eye as well: Dickinson's older brother Austin. Austin Dickinson married Susan in 1856, making her Emily Dickinson's sister-in-law. When the newlyweds moved in next door to the Dickinson Homestead, where Emily lived her entire life, over 275 poems passed between them. Most of these poems traveled by mail as Emily grew more and more reclusive.

She Also Wrote Love Letters to a Mystery Man

Three letters in Emily Dickinson's body of work are known as the "Master Letters." Written between 1858 and 1862, two years after Susan and Austin married, Dickinson wrote romantic letters to a person she only named as "Master." Historians still don't know to whom she was writing, though a possible recipient was her father's best friend Judge Otis Phillips Lord, who proposed marriage to Emily in 1883.

She Was an Accomplished Gardener

Emily Dickinson studied botany in her childhood and tended the Homestead garden religiously. She was well-known in her town for her remarkable gardening skills, certainly more than for her writing skills. Dickinson frequently sent flowers along with her writing to friends and loved ones. When she died, she was buried with her favorite flowers, including orchids, violets and heliotrope.

She Wrote Nearly 900 Poems During the Civil War

The years between 1861 and 1865 were Emily Dickinson's most productive writing period. While Emily Dickinson never specifically names the Civil War in her poems, many of these poems, including "It feels a shame to be Alive" can be interpreted to refer to the political climate of the country.

The Stone — that tells defending Whom
This Spartan put away
What little of Him we — possessed
In Pawn for Liberty — ..."

She wrote nearly half of the total poems she would write in her entire life during the Civil War. In a rare public showing, Dickinson anonymously published three poems in the newspaper Drum Beat in an effort to raise money for the Union cause.

She Was Reclusive, But Not Antisocial

Besides her famous tendency to break grammar and poetic rules, Emily Dickinson's best-known attribute is her reclusiveness. Dickinson didn't leave the Homestead in the last two decades of her life, and in her later years, she didn't even leave her bedroom toward the end of her life. Her family described her as having a "nervous personality", and historians attribute her reclusiveness to severe anxiety and depression.

However, that's not to say that Emily Dickinson was antisocial. She maintained her relationships by letter and cared very deeply for her family and friends. Dickinson took care of her ailing mother until her death in 1882 and sat at her nephew Gib's deathbed when he died of typhoid fever at the age of 8. With every death of her family and friends, Dickinson became more secluded, but she never cut herself off from her family.

Emily was not the only Dickinson to live at home without getting married. She was very close to her younger sister, Lavinia, who also never married or left home. Lavinia managed many of the household and social tasks that Emily found overwhelming, and is the reason why Emily Dickinson became a household name after her death.

Emily's Death Is Still a Mystery

Emily Dickinson died on May 15, 1886, after her health had failed considerably. The doctors documented her cause of death as Bright's disease (kidney disease). Dickinson had been in poor health for two a half years and took a severe downturn after the death of her beloved nephew. She was bedridden for seven months before she passed away.

However, many of Emily's documented symptoms did not reflect a kidney disease. She wrote to friends and family about terrible headaches and nausea that worsened with every death of her family and friends. Her brother Austin described her breathing as raspy and whistling when she slipped into a coma. Researchers now believe that Emily Dickinson's death was heart failure caused by hypertension, but no one will ever know for sure how the prolific poet died.

Most of Her Letters Were Burned or Edited Posthumously

Before her death, Emily Dickinson made her sister Lavinia promise to destroy her letters. Lavinia followed through on her promise and burned most of Dickinson's letters. She was shocked to find Dickinson's poetry, however, which she had not promised to destroy. Lavinia worked to publish her sister's poetry despite lawsuits and fighting between her brother Austin, her sister-in-law Susan, and Austin's mistress, Mabel Loomis Todd, who edited many of Dickinson's poems herself.

The letters that were not destroyed were found to be edited. Many words and names were cut out of these documents, likely by Dickinson's brother and Todd. Historians surmise that most of the mentions in these letters refer to Susan.

The last letter Emily Dickinson wrote was to her cousins, Louise and Frances Norcross. It read "Little Cousins, Called Back. Emily." Dickinson died a few weeks later. Susan wrote Emily's obituary and arranged much of Dickinson's funeral, including a basic gravestone with only Emily's initials: "E.E.D." Years later, Dickinson's niece Martha Dickinson Bianchi replaced the stone with a marble slab with a memorable epitaph that reflected the poet's last written words: "Called Back."

Emily Dickinson primarily wrote in common meter, which consists of four-line stanzas that alternate between iambic tetrameter (four feet per line) and iambic trimeter (three feet per line). This meter is frequently found in church hymns that Dickinson would have likely grown up with. That's why her poems can be sung to the beat of most traditional hymns, including Amazing Grace and folk songs such as The Yellow Rose of Texas. They even match the beat of well-known television theme songs such as the theme from Gilligan's Island.

Dickinson's Life Is in Her Writing

Even though the life of Emily Dickinson was cut short, it was full and rich in the pages of her writing. The facts of Emily Dickinson's life contribute to our understanding of the famous poet, but there's nothing like reading her words yourself. Take a look at Emily Dickinson's most notable quotes to learn more from the writer's own words.