13 Fun Facts About Hawaii for Kids To Dive Into

Are you looking for some unique, quirky or just plain fun facts about Hawaii? Settle in and grab your popcorn. Hawaii is a fantastic place with a long history and lots of fun and exciting facts. 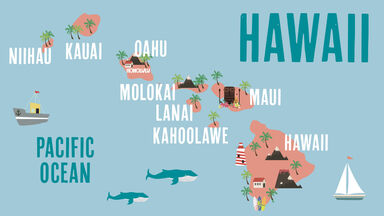 When it comes to fun facts, Hawaii is full of them. Get your fill of this state by jumping into these cool facts about the state itself.

Hawaii is so unique, it gets its own time zone. Hawaii goes by Hawaii Standard Time, which is 2 hours behind Pacific Standard Time. And it never changes. So, Hawaii isn’t annoyed by jumping back and springing forward because they don’t have Daylight Savings Time.

Surfing as a Sport Invented in Hawaii

Hawaii is a beautiful place to hang ten, and there is a reason for that. The sport of surfing as we know it today was invented in Hawaii. While the first instances of people riding waves can be found in Polynesian cave paintings, turning it into a sport and way of life is entirely a Hawaiian tradition. And interestingly enough, surfing led to skateboarding. Thank you, Hawaii.

If you are looking for the largest dormant volcano in the world, you need to point your eyes to Hawaii. Known as Haleakala, this dormant volcano is a hot spot for tourists who want to witness the world’s most spectacular sunset. Just visit the Haleakala National Park Maui to see the “house of the sun” yourself.

Hawaii has a long and exciting history, including its own ghostly ghouls, haunted highways and large creatures. Take a peek at these scary fun facts about Hawaii you might not have known.

When it comes to Hawaiian legends, the Night Marchers take the cake. This urban legend comes from generations of orators telling the story of the ancient Hawaiian warriors. If you are unlucky enough, it’s said that their spirits roam the island waiting for their next battle. It’s advised to never look a Night Marcher in the eye or interrupt their procession.

With Hawaii’s vast history of monarchs and battles, you can find many different haunted grounds, but the Pali Highway takes the prize. A winding road from Honolulu to the Windward coast, Pali Highway is full of fascinating legends, including one with the demigod Kamapua’a.

If you don’t like creatures with legs, then nothing will get your heart racing faster than a giant centipede. With all the legs and creeping, these centipedes come in at a whopping 12 inches long and can bite. And since they have a type of armor, stomping them doesn't do you any good. These large pests are the things of nightmares.

New York might have smog, but Hawaii takes it a step further with vog. Vog is volcanic smog and is common in Hawaii. If you live in this state, you often get a vog report. Those with respiratory conditions might just want to stay inside.

Myths and legends abound on the Hawaiian Islands, but if you are looking for a scary fun fact about Hawaii, check out the Kaneana Cave. Named for the god of creation, Kaneana Cave is a mysterious cave and home to shark God Nanaue. It's full of fun haunted stories that bring visitors from far and wide.

If scary facts weren’t enough for you, it’s time to break into the weird Hawaiian facts. Every state has its own unique traditions, including Hawaii.

Have you ever heard of a Post-a-Nut? Well, you would if you lived in Hawaii. Slap some postage and an address on your coconut and you are ready to send. No box necessary. And if you want to get fancy, you can even decorate your coconut post!

Hawaii has some original greetings. So you can keep your handshakes at home. In Hawaii, you might greet with a honi. A honi is where you meet forehead to forehead and exchange breath. You might also be greeted with a hug, but be sure to say, "aloha."

State Gem Is an Animal

The state gem of Hawaii is black coral. However, this isn’t a gem at all. The living creature called a polyp creates black coral. But since black coral is harvested to make jewelry, it’s supported as Hawaii’s official state gem.

Most states have a pretty standard landmass, but not Hawaii. It’s growing. Because Hawaii is built on dormant and active volcanoes, it gains land every year, making it bigger. In fact, the U.S. Geological Survey has noted that Hawaii has gained 570 acres since 1983.

Hawaii is a unique state indeed. In addition to being an island, it has 8 climate zones. The different regions of Hawaii’s big island range from humid tropical to polar climate. You might only think of Hawaii as warm, but those mountainous peaks get some snow.

Hawaii is full of fun facts. From the long history to the hauntings, Hawaii is a unique state. Other U.S. states have unique features and stories too, so explore another warm state with fun facts about Florida. If you are looking for a few more state facts, you might enjoy the most interesting facts about state capitals.