Hurricanes are a fact of life in some parts of the world. These storms are fascinating and dangerous weather events. Discover some key hurricane facts so that you can become knowledgeable about this important type of tropical weather system. 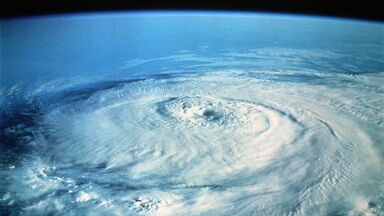 hurricane elena in the gulf of mexico
Advertisement

Discover some basic hurricane facts, including how they form and develop, as well as when and where they occur.

Hurricanes occur only in the Atlantic basin and parts of the Pacific ocean in locations at least five degrees latitude away from the equator. The Atlantic basin includes the Atlantic Ocean, the Caribbean Sea and the Gulf of Mexico. In the Pacific, hurricanes occur in the Eastern Pacific, which includes north-central and northeastern portions of the ocean. The same weather phenomenon can occur elsewhere, but the term hurricane is only used in this area. In other locations, these storms are called typhoons.

Water temperature plays an important role in hurricane formation and development. In order for a hurricane to form or hold together, the water has to be at least 80 degrees Fahrenheit (27 degrees Celsius). It is very common for water temperatures in the areas where hurricanes form to be above this threshold. The heat in water functions as fuel for a hurricane. The hotter the water, the more intense the storm.

Water temperature is important for hurricanes to develop, but so is humidity. Hurricane development isn't likely when the air in the mid-levels of the atmosphere is dry. This is partly because dry air causes evaporation, which results in a cooling effect that prevents convection. Instead, moisture in the form of humidity is needed to fuel a hurricane.

Discover some key facts about forecasting and monitoring hurricanes.

1. Beginning Stages of a Hurricane

Once a tropical system reaches winds at least 74 miles per hour (mph), which is 64 knots, it is strong enough to be upgraded to hurricane status. The storm already has a name at this point. Names are issued for tropical storms, which are a step below hurricane status in terms of wind speed. Forecasters issue watches and warnings based on the storm location, how quickly it is moving, what direction it is traveling, how big it is, and how strong it is predicted to become.

3. Anatomy of a Hurricane

Once a storm's winds cross the 74 miles per hour threshold, an eye starts to form in the center of the storm. This eye is the storm's center of circulation. Conditions are mostly calm inside the eye of a hurricane. The eyewall, which is the area immediately surrounding the eye, tends to have intense conditions. Rainbands extend out from the eyewall, producing intense wind, rain, thunderstorms, and sometimes tornadoes.

Storms that reach Category 3 status are classified as major hurricanes.

No two hurricanes are identical, though quite a bit is known about what to expect from this type of storm.

Not every location that a hurricane passes over feels its impact the same way. This is because the storm's strength and power are not uniformly distributed. Hurricanes are viewed in terms of quadrants, which are labeled based on the direction of the storm's movement and position relative to the eye of the storm.

Hurricanes often produce tornadoes, which can spin up rapidly without advance warning. They are most common within the top/right front quadrant of a hurricane away from the eyewall, but they are not limited to that part of the storm. That portion of the storm tends to be the most unstable, so it is particularly conducive for tornadic activity. But, tornadoes can also pop up close to the eyewall and/or in other quadrants.

Storm surge occurs when the winds of a hurricane push water onto land at the coast. A lot of factors impact storm surge size, some related to the storm itself and some related to the geographic characteristics of the area being impacted. Storm surge is very dangerous, as it creates an enormous wall of water that can sweep away buildings and/or cause significant flooding. In 2005, Hurricane Katrina produced a 27.8-foot storm surge in Bay St. Louis, Mississippi. As of January of 2021, this is the highest storm surge on record.

Hurricanes begin to lose their strength as they move over land, but this doesn't occur instantly. A hurricane that continues on an inland path after landfall will gradually weaken and dissipate as it moves further and further away from water. Along the way, though, it will continue to produce high winds, significant rain, and can continue to produce tornadoes. In 2020, several inland states, including Arkansas, Tennesse, West Virginia, and Vermont, were impacted by hurricanes.

Hurricanes don't always move inland after making an initial landfall. For example, if a hurricane were to cross the Florida peninsula traveling east to west, it could go across the land and come out into the Gulf of Mexico. There, if conditions are favorable, it could gain strength and continue on until striking land again. In 2005, Hurricane Wilma made landfall three times. She impacted land twice in Mexico (Cozumel and the Yucatan Peninsula) before striking Florida's Cape Romano.

Whet Your Appetite for Weather Learning

Hurricanes are very dangerous; it's important to always observe hurricane safety tips if you're in an area that could be impacted by this type of storm. Now that you know some interesting facts about hurricanes, take the time to learn more about the weather. Start by exploring facts about tsunamis. Then, learn some words to describe a tornado. From there, discover other common types of weather conditions.