15 Intriguing Easter Facts Behind the Traditions 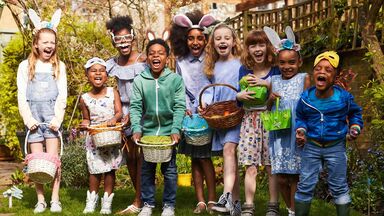 Easter Facts From Around the World

Easter facts and traditions can be found around the world. Learn some interesting facts about the holiday of Easter and its beginnings.

Decorating eggs is an ancient art with a long history. The decorating of eggs originated from Persia. However, the early Christians gave the art of decorating eggs a religious twist. The red-dyed egg is supposed to symbolize the blood of Christ.

Easter isn’t just a holy holiday; it’s named for a goddess. The pagan goddess Eostre, or Ostara, was the goddess of spring. The history of Eostre is interwoven with rabbits and eggs. Sound familiar? While these elements might have started out as a Pagan tradition, they were absorbed into the Christian holiday overtime.

Pretzels Were an Easter Treat

When you think of Easter, pretzels don’t instantly pop into your mind, but they should. Pretzels used to be an Easter treat, right there along with eggs. Not surprisingly, pretzels were also thought of as good luck. So, you might want to try a pretzel for Easter this year.

Who doesn’t like a good Cadbury egg at Easter? The giving of eggs in your basket is symbolic of new life. They can also be traced back to Jesus’ resurrection. So, those eggs aren’t just delicious but have meaning.

Everyone wants a big chocolate egg in their Easter basket, but Italy has a bit more than anyone can handle. According to the Guinness Book of World Records, the largest chocolate egg comes in at a whopping 15,873 lbs and stands 64 ft. tall. Now that is a whole lot of chocolate!

Easter Bonnets Are a Newer Fad

Wouldn’t you know it, American’s like their ears? When it comes to Easter bunnies, 59% of people eat the ears first, according to a study by Kathleen Yaremchunk.

The Flower of Easter

April flowers might bring May showers but when you are talking about the Easter flower, look no further than the white Easter lily. It should come as no surprise this flower represents rebirth in addition to hope and life.

While Easter might have started out with Pagan traditions, it’s become a well-known religious holiday for many. Some might celebrate eggs and Easter baskets, but Easter is also about Christ.

The week leading up to Easter is considered the Holy Week by Christians. This week leads up to Jesus Christ’s resurrection. The important days included in the Holy Week are Palm Sunday, Maundy Thursday, Good Friday, Holy Saturday, and Easter Sunday.

Lent Leads Up to Easter

Lent is an important time for Christians leading up to Easter Sunday. Lent is a 40-day period where Jesus is remembered, and many times, something might be given up for Lent.

In the Christian religion, Easter Sunday is also known as Resurrection Sunday. This is the day Christians commemorate the resurrection of Jesus. Each different day during Holy Week celebrates a feat Jesus made before his resurrection.

One of the Oldest Christian Holidays

Easter is considered among the oldest Christian holidays. Writings about Easter can be found dating back to the 2nd century. However, the traditions and days of celebration have changed since these early writings.

Easter Is Celebrated on Different Days

Finding new Easter facts can be fun. Not only is it a religious holiday, but it’s a holiday steeped in traditions from around the world. Keep your exploration of Easter going by looking at different Easter symbols and their meanings. You might also enjoy some Easter puns to get you laughing.