While Langston Hughes is probably most famous for his poetry contributions to the Harlem Renaissance movement, he was an exceptional writer and traveler. Learn fun and interesting Langston Hughes facts chronicling his life and accomplishments. 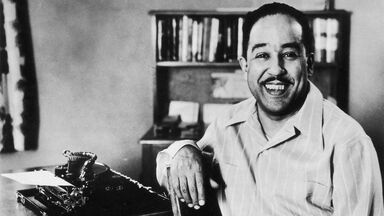 Who Was Langston Hughes?

Langston Hughes is recognized as an innovator of jazz poetry, which mimics jazz music’s flow and rhythm. One of Langston Hughes’ famous jazz poems is “The Weary Blues.”

3. Poet of the People

Langston Hughes has been called a poet of the people. The reason behind this is due to his depictions of Black culture and everyday life. Hughes wrote about what he saw happening in the world around him and inspired others to be proud of being African American.

4. Reporter for the Chicago Defender

While Lanston Hughes is most prolifically known for his contributions to the Harlem Renaissance, he was also a proficient reporter. He wrote for the influential African-American newspaper the Chicago Defender for 20 years from 1942-62. He used his stance as a reporter to bring more light to controversial issues of the time, like injustices in America and abroad.

In 1937, Hughes worked for The Baltimore Afro-American newspaper and reported on the Spanish Civil War. For five months, he stayed in Spain writing 22 articles covering unique war areas like Black Americans volunteering in the Abraham Lincoln and Washington Brigades. He also wrote two poems during this time, “Postcard from Spain” and “Letter from Spain.”

Throughout his lifetime, Langston Hughes won a multitude of awards for his literary prowess. A few different accolades include:

Langston Hughes attended Columbia’s School of Mines, Engineering and Chemistry from 1921 to 1922. While he might have attended engineering school to please his father, Langston decided this wasn’t his path in life and dropped out after a year. However, it was during his time at Columbia that Hughes got involved in the Harlem cultural movement. While he might have dropped out of Columbia, he did graduate with a Bachelor of Arts from Lincoln University using a scholarship.

Langston Hughes' curious nature and love of writing helped him to travel around the world. His experience of the world never included a famous love affair or getting married. In fact, throughout his life, Langston Hughes maintained his single status. He was never married or and didn't have any children. There are rumors and speculation surrounding his sexuality.

While his memoir didn’t see publication until nearly 15 years later, Hughes was first approached about composing his biography, The Big Sea, when he was only 23 years old. Since he wasn’t up to the challenge at such a young age and had more world to experience, it took him some time to get his experiences down into words.

The writings of Langston Hughes weren’t confined to just poetry and reporting. He could write just about anything, including plays and short stories. A few of his famous plays include Mulatto, Black Nativity, Simply Heaven, Tambourines to Glory, and Jerico-Jim Crow.

One of his most famous poetry works, “The Negro Speaks of Rivers” was written by Langston Hughes in 1920 at the tender age of 17. During a trip to Mexico with his father, Hughes was inspired to write his work of heritage and strength while crossing the Mississippi River. This pivotal piece of writing was dedicated to W.E.B. DuBois and was published in The Crisis in 1921.

Inspiration takes work and Langston Hughes was never one to sit still. During his youth and life, he traveled around the globe, noting the human condition and inequality. Not only did he travel to Africa as a steward on a freighter, but he spent time in South America, Europe, and Asia.

Fire!! was the brainchild of Langston Hughes and Richard Nugent. This magazine was pivotal to the growth of the Harlem Renaissance movement even though it had limited issues. While this magazine started with a dream to highlight the African American condition, it quickly ended due to finances and the building burning.

15. Wrote Poetry Until his Death

Langston Hughes is famous for his contribution to the world of poetry. In fact, throughout his life, he never stopped composing poems. Until he died in 1967 due to complications from a surgery for prostate cancer, Langston Hughes was writing poetry. The last published work of Langston Hughes was The Panther & the Lash about the Black Power movement.

Langston Hughes brought light to a lot of different issues in America and abroad. However, his work is most famous for bringing light to the Harlem Renaissance movement. With one slice of the pen, Hughes’ poetry, short stories and plays inspired the African American artistic movement’s masses. Continue exploring influential Black literature with a biography of Zora Neale Hurston. Hughes not only celebrated Black lives but helped to shape racial pride. So, you might also want to learn about another influential African American leader — Martin Luther King, Jr.