17 Fun Facts About Florida for Kids to Discover

Have you ever been to the warm beaches of Miami? What about the intricate ecosystem of the Everglades? Even if you've never been to Florida, you'll love learning more about this fascinating state. Keep reading for fun facts about Florida's history, geography, climate, and tourist attractions. 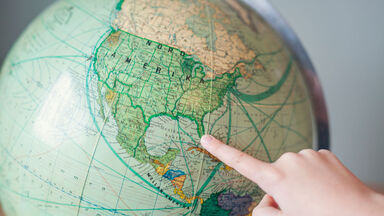 child pointing to Florida on a globe
Advertisement

Florida's history began way before it even had a name. Take a look at these intriguing facts about the history of Florida and its people.

Florida Was Underwater Until 23 Million Years Ago

After Florida split from Pangea with the rest of North America about 200 million years ago, it became flooded when the glaciers melted and raised the sea level. It stayed under the Atlantic Ocean for hundreds of millions of years until the glaciers formed again. Then parts of Florida began to emerge as dry land.

The First Humans Settled in Florida 14,000 Years Ago

Florida was added to the United States in 1845, but there were people living there long before that! Archaeologists believe that Paleo-Indians and the Early Archaic people arrived in Florida more than 14,000 years ago. These populations are believed to be the ancestors of the Seminole, Creek and Apalachee people who lived in Florida in the 17th and 18th centuries.

Florida Was Named After a Spanish Festival

One year before Jackie Robinson, the first African American professional baseball player, played his first game with the Brooklyn Dodgers, he played a spring training game in Daytona Beach, Florida. He experienced discrimination in the segregated state before starting in the 1946 game at City Island Ball Park (now Jackie Robinson Ballpark), the first professional game to feature a Black player in America.

You probably already know that Florida is warm and sunny. But what else do you know about the Sunshine State? Test your knowledge with these facts about the geography, climate and tourist features in Florida.

Florida Is the Flattest State in America

When you think of flat states, you probably think of Kansas or Nebraska. But those states are practically mountainous compared to Florida! Florida's mean elevation is 100 feet, and its highest point is Britton Hill with an elevation of only 345 feet — the lowest high point in any state.

The Weather in Florida Once Went Down to -2°

Thousands of people move to Florida every year to enjoy the warm weather and sunshine. But even Florida has its cold days, including a record low of -2° Fahrenheit! The freezing day occurred in Tallahassee on February 13, 1899, during the Great Arctic Outbreak. February in Tallahassee usually doesn't get below 41° Fahrenheit, so it was quite a record indeed!

More Amusement Park Visitors Come to Orlando Than Anywhere Else

Tourists looking for amusement park fun find themselves right at home in Florida. It has seven of the ten most-visited theme parks in the United States, including the Walt Disney World Resort, the Universal Orlando Resort and Seaworld Orlando. There's something for every visitor in Florida!

Florida Has the Largest City in the Contiguous United States

Outside Alaska, Florida has the city with the largest area: Jacksonville, at 747 square miles. It's almost 300 square miles larger than Los Angeles, California, and nearly twice as big as Indianapolis, Indiana. Jacksonville has one of the highest populations in the United States as well, as over 821,000 people call the huge city home.

There are over 1,350 miles of coastline in Florida, 663 miles of which are its famously sunny beaches. It ranks far below Alaska, which has over 6,600 miles of coastline, but quite a bit higher than California's 840 miles. You won't have a problem finding a place to relax on a Florida beach!

Depending on how fast you drive, of course! Locals say that you're never more than 60 miles from the beach when you're in Florida, thanks to the state's bordering bodies of water. It lies between the Atlantic Ocean and the Gulf of Mexico.

From its ability to grow amazing agriculture to its giant reptiles patrolling the swamps, Florida has a reputation for extremes. Keep reading to learn more amazing facts about the state.

You Can Only Find Both Crocodiles and Alligators in Florida

The American crocodile can be found in south Florida and in parts of the Caribbean. Its alligator cousin has been spotted in various parts of the United States, including North Carolina and Virginia. But if you want to see both animals in their habitats, you have to go to Florida — namely, the Everglades National Park.

Neither Crocodiles Nor Alligators Are the Largest Florida Predators

Floridians regularly see alligators and crocodiles around the state. But neither reptile is the most dangerous predator in the Everglades. That honor goes to the Burmese python, an invasive species to the area, which has been known to eat an entire gator or croc in one sitting!

Florida Has The Most Lightning Strikes and Hurricanes

The Sunshine State sounds like it should be sunny most of the time, but there is plenty of extreme weather in Florida. There are more lightning strikes per year in Florida than in any other state, and it's the most hurricane-prone state as well. You may also be surprised to hear that it has more tornadoes per area than the other states in the country as well!

75% of America's Oranges Are From Florida

Do you think of oranges when you think of Florida? There's good reason for that! Three quarter's of the nation's oranges are grown in Florida. Its rich soil and temperate climate are perfect for growing the delicious citrus fruit.

Florida Has the Most Golf Courses in the U.S.

If you want a great game of golf, look no further than the Sunshine State. It has more than 1,300 public and private golf courses — more than any other state in the United States! Florida is also home to the Professional Golf Association (PGA) tour headquarters and the World Golf Hall of Fame and Museum.

Gatorade Was Invented in Florida

Ever wonder how Gatorade® got its unique name? Florida Gators football coach Ray Graves needed a sports drink that would replace his team's body fluids after practices and games. The first version of Gatorade® (or "Gator-Aid," as it was originally called) was developed in 1965. Other teams were impressed with the Gators' performance on the football field, and the sports drink became popular all over the country.

Part of a Powerful Puzzle

Florida is a wonderful place to live, visit or learn about. Continue learning about the Sunshine State with some fun Florida slang. This state is only one piece of the United States puzzle, and its history and geography make much more sense in context. If you'd like to learn more about the states of America, check out these fun facts about Georgia, the Peach State. Or if you'd like to read more about the continent as a whole, take a look at these key North America facts as well.