With their long legs and long elegant necks, giraffes are among the most beautiful sights to behold. Discover some fun and interesting giraffe facts to learn more about these lovely creatures. 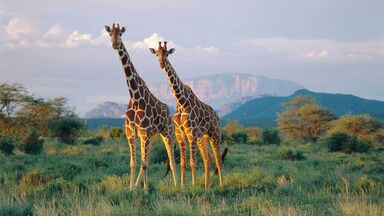 All animals need sleep, but giraffes sure don't need much. They are actually among the animals known to need the least sleep.

Giraffes make it through life on a a series of super-short naps. They don't sleep very much or for long periods of time. Instead, they take several naps throughout the day, each one only a few minutes long. Giraffes are believed to sleep only about two hours per day.

Giraffes Sleep Standing or Lying Down

Giraffes have the ability to sleep standing up or lying down. In the wild, they usually sleep on their feet. This is because they are more vulnerable when lying down than standing up. Giraffes in zoos, or other places where they are protected from predators, are more likely to lie down to sleep than those who live in the wild.

These super-tall mammals are stately and beautiful. Size is definitely one of the most distinctive giraffe traits to consider.

Giraffes typically range from 14 to 18 feet in height, though some are even taller. This means they can easily peer into the second floor of a house from a basic standing position. Giraffes are often described as the tallest mammal, but they're actually the tallest animal on Earth. Male giraffes are taller than females and also weigh more.

Necks Are Taller Than Many People

One body part on a giraffe is bigger than a person. Seriously! A giraffe's neck alone can be more than six feet long. How's that for huge? A 2016 Centers for Disease Control (CDC) study indicated that 5'9" is the average height of adults in the United States. The study included over 47,000 men and women over the age of 20.

What could be cuter than a dwarf giraffe? In 2015, scientists first observed a Nubian giraffe that exhibits dwarfism. That giraffe, which they named Gimli, reached only 9'6" tall. In 2018, an even smaller giraffe was identified. Named Nigel, this Angolan giraffe is just 8'5" tall. As of early 2021, Gimli and Nigel are the only two known dwarf giraffes.

Facts About Different Types of Giraffes

There are four giraffe species known to exist. The four species are Masai, northern, reticulated, and southern. Until 2016, it was believed that all giraffes were just subspecies of the same species. That year, researchers identified four distinct species.

Giraffes all have patches, sometimes called spots, that are brown. However, their spots are not all the same shade of brown. Masai giraffes are visibly darker than other types. Their patches are a deep, dark brown surrounded by a creamy shade. Other giraffes have brown patches, but theirs are quite a bit lighter than those of Masai giraffes.

How'd you like to eat salad pretty much all the time? That's exactly what giraffes do. They also have some bizarre eating habits.

Giraffes are herbivores, which means their diet primarily consists of plants. Giraffes mostly eat leaves, likely because they have little competition for a food source so high off the ground. They particularly enjoy acacia leaves, though they eat many types of foliage.

Giraffes are ruminants, a trait they have in common with cows, deer and antelope. A characteristic that all ruminants share is a four-chambered stomach. This helps them properly digest their leaf-heavy diet.

Giraffes don't have to drink water every day, or even every few days. They can go up to three weeks without water. This is largely because they get quite a bit of water from the leaves they eat. When they do drink water, they consume quite a bit (up to ten gallons) at a time. While some say that giraffes can go longer than camels without drinking water, this is not correct. Camels can go for more than half a year.

Giraffes are native to the continent of Africa. Discover key facts about their habitat preferences and needs.

Giraffes thrive in the hot, dry and arid climate of their home continent of Africa. Most live in the sub-Saharan portions of Africa. The fact that they don't need much water allows them to live in such areas, where access to water can be scarce. They can survive in areas where predators who need to drink water more frequently could not.

Giraffes don't thrive on alone time and they're not antisocial. They tend to live in groups of approximately 20 giraffes, though they're friendly and open to bringing in other giraffes to their groups.

In the wild, giraffes tend to inhabit grasslands, savannas or open woodland ecosystem environments. These wide, open spaces allow them to move freely while constantly remaining on the lookout for predators in their vicinity.

Because of their diet, giraffes need to be in areas where trees are plentiful. They particularly like areas where there are a lot of acacia trees (because they like to eat the leaves). They will venture into wooded areas to eat leaves but do not live in such places.

Giraffe groups establish home ranges over which they wander, but they are not at all territorial. A giraffe group's range typically consists of between 30 and 580 square miles. The drier the area, the larger the range.

Giraffes are majestic animals. Now that you know some fun facts about giraffes, it's a great time to discover key facts about some other awesome animals. Start by investigating some facts about cheetahs. From there, you can discover a few weird facts about animals from all over the world.