The Lincoln Memorial in Washington, D.C. commemorates the life of President Abraham Lincoln, regarded by many as the most influential president of the United States. Whether you've seen it in person or only on the five-dollar bill, you can feel how important the monument is to American history. Keep reading for 17 Lincoln Memorial facts that the average tourist may not know. 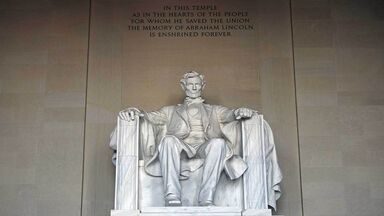 Facts About The History of the Lincoln Memorial

The Lincoln Memorial is a historic part of the National Mall in Washington D.C. But it's also an important part of United States history in both what it memorializes and how it was built. Take a look at these interesting facts about the planning, construction and dedication of the Lincoln Memorial.

It Took Nearly 60 Years To Be Erected

In 1867, Congress passed the first bill to incorporate a commission that would oversee a memorial to Abraham Lincoln. However, designs were not approved and nothing happened until the turn of the century. Five more bills were defeated in Congress before another bill was passed in 1910. Construction began in 1914 on Lincoln's birthday, February 12th, and slowed during World War I. It was finally completed in 1922.

It Was Originally Going To Be a Pyramid

John Russell Pope's original plans for the Lincoln Memorial were more similar to an Egyptian pyramid than the Greek Doric Temple we know today. It had eight layers that made up a ziggurat temple with a statue of Lincoln on the top. While the pyramid would have complemented the Washington Monument, an Egyptian-style obelisk, Pope's idea lost out to Henry Bacon, who ultimately designed the neoclassical monument.

Abraham Lincoln's oldest son, Robert Todd Lincoln, was 22 years old when his father was assassinated. When he attended the dedication of the Lincoln Memorial on May 30th, 1922 as Lincoln's only surviving child, he was nearly 80 years old. He died four years later.

The Dedication Ceremony Was Segregated

Even though Abraham Lincoln is known as the Great Emancipator, the crowd and speakers at the dedication of the Lincoln Memorial were segregated by race. Dr. Robert Russa Moton, a Black speaker at the event, implored the crowd to embrace Lincoln's philosophy of freedom and racial justice — but was forced to sit away from the mostly white crowd he was addressing.

The Reflecting Pool Is Part of the Memorial

Amazing Facts About the Memorial

It's impossible not to feel awestruck when you look up at the massive Lincoln Memorial. Its formidable statue of President Lincoln, seated in front of Greek columns and majestic murals, makes it easy to miss all the details that make the monument even more special than it looks at first glance. Check out these details about the Lincoln Memorial that may surprise you.

The Number of Columns Is Symbolic

At 44 feet tall, the 36 columns in the Lincoln Memorial serve both a structural and a figurative purpose. The number of columns corresponds to the number of states in the Union during Lincoln's lifetime — the states that he managed to keep from breaking apart. Within the monument, all 50 states are either engraved or included in a plaque.

Two of Lincoln's Famous Speeches Are Engraved in the Wall

No monument to Abraham Lincoln would be complete without the president's words. Both the Gettysburg Address and second Inaugural Address are engraved into the wall on either side of Lincoln's statue. These speeches etched in stone reinforce how important the ideals of Lincoln's words are to America itself.

Someone Made an Engraving Mistake

While Abraham Lincoln's words seemed unerring, their engraving process wasn't. There is a visible mistake in one word of Lincoln's second Inaugural Address: the word "Future" in "high hope for the future" was spelled "Euture." The engraver filled in the last line of the errant E, but keen-eyed visitors can still see where it used to be.

There Are Two Significant Murals Inside

Like every part of the Lincoln memorial, its murals were designed to commemorate his ideals and principles. Artist Jules Guerin painted one mural titled "Emancipation" above the engraved Gettysburg Address on the south wall, and it features the principles of Freedom, Liberty, Immortality, Justice, and the Law. The north wall, which includes Lincoln's second Inaugural Address, has a mural that shows the principles of Unity, Fraternity and Charity.

Even the Building Materials Are Symbolic

The symbolism of the Lincoln Memorial seeps into the building materials themselves. The designers wanted the materials to come from a variety of states to demonstrate the unity of the nation. Much of the monument is made from Colorado marble and Indiana limestone. The floor is made from Tennessee marble and the ceiling includes marble from Alabama. Most of the Lincoln statue itself is made from Georgia marble, one of the states most dedicated to the Confederacy.

If the Statue Stood Up, He'd Be 27 Feet Tall

In early construction, Daniel Chester French's design of the Lincoln statue was designed to be 10 feet tall when seated. However, it faded into the background of the immense monument around it, so French doubled its size. The Lincoln statue stands at 19 feet tall inside the 99-foot monument, and if the statue version of Lincoln stood, his height would be over 27 feet.

There is a 43,000-square-foot basement underneath the Lincoln Memorial known as the Lincoln Memorial Undercroft. It was built to sustain the huge concrete pillars needed to hold the monument up on the surface. It was forgotten until 1975, when a minor renovation revealed the massive basement, along with graffiti and cartoons on the walls from 1914 construction workers. It's been closed to the public for safety reasons, but there are plans to renovate and open the basement in the future.

Abraham Lincoln's legacy continues every day that the United States remain united. But the memorial itself is a significant marker of the 16th president's continued influence. Read more to learn how the Lincoln Memorial became a part of American history.

The Lincoln Memorial Is Found on Two Pieces of Currency

You probably know that Abraham Lincoln's portrait appears on both the American penny and the five-dollar bill. However, if you flip both of these items over, you'll find a picture of the Lincoln Memorial. If you look closely, you can see Lincoln's statue between the tiny columns.

More Than Seven Million People Visit the Memorial Every Year

The Lincoln Memorial is known as a place of hope and inspiration all around the world. It is managed by the National Park Service and received over seven million visitors annually. Because of the monument's popularity, it's one of the most easily recognized memorials around the world.

The Lincoln Memorial Is Open 24 Hours a Day

If you want to visit the Lincoln Memorial, you don't need to make an appointment! It's open every day, all day, including all hours of the night. Many people take the opportunity to visit Abraham Lincoln in the evening hours for a quieter, intimate visit.

The Monument Is a Significant Part of the Civil Rights Movement

The Lincoln Memorial has played a part in several key moments of the Civil Rights Movement. When Black singer Marian Anderson wasn't allowed to sing at Constitution Hall in 1939, she was invited to sing on the steps of the Lincoln Memorial instead. One of the most famous moments in American history, Martin Luther King, Jr.'s I Have a Dream speech took place on the monument's steps (and is commemorated with King's words etched into the place he was standing). The Lincoln Memorial was also the site of the Inaugural Celebration for President Barack Obama, the first Black president of the United States.

Almost 45 years after it was built, the Lincoln Memorial was one of the first monuments to be included in the National Register of Historic Places. The list was formed in 1966 and includes nearly 100,000 buildings, sites and structures around the country. Inclusion on the National Register allows monuments to receive federal preservation tax credits and grant programs.

The Savior of the Union

The Lincoln Memorial puts Abraham Lincoln's intangible message into literal stone for all to see. However, there's so much more to Lincoln as a person than any memorial can capture. Learn more about the significant accomplishments of Lincoln's life to understand more about the popular president. You can also check out these interesting facts about Abraham Lincoln for some handy presidential trivia.