17 Shakespeare Facts: The Bard's Life and Works in Brief

Beyond just being a master of words and the creator of a few classics, Shakespeare had a very interesting and sometimes mysterious life. Explore a few fun and little-known Shakespeare facts. 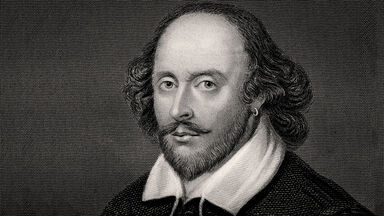 Beyond just being a famous playwright and poet, William Shakespeare was a unique personality of the 1600s. Explore some interesting Shakespeare facts about his life and birth kids might enjoy.

Shakespeare introduced a lot of new words to the English language through his plays. In fact, he’s said to have contributed thousands of words like barefaced and dawn. While these words were probably common in spoken English, Shakespeare was the first one to write them down.

Not only did Shakespeare create a bunch of new words, but he’s also known as the 2nd most quoted writer in history. The first is the Bible. A couple of famous quotes created by this bard include:

“All that glitters is not gold.”

Much of William Shakespeare’s childhood is still a mystery, including his birthday. While historians have been able to dig up the date of his baptism, they aren’t exactly sure what day William Shakespeare was actually born on. Therefore, it’s guessed that he was born sometime in April 1564. His real birthday will probably forever remain a mystery.

No Female Actors in Shakespeare Plays

Though William Shakespeare is known for his epic love stories, no women could participate in his plays. Therefore, the female parts were played by men. In fact, it wasn’t until after Shakespeare’s death that females were allowed to participate in theater.

Worked as an Actor

In the world of theater, Shakespeare wore many hats. In addition to being a playwright and shareholder of Lord Chamberlain’s Men, he was also an actor in his own right. While how Shakespeare got into acting isn’t completely known, some guess that he started with a traveling group of actors before ending up in London.

Shakespeare Facts About His Plays

During his time, Shakespeare didn’t put down his pen! There are 37 plays, 154 sonnets and numerous poems attributed to Shakespeare, and that’s just the stuff historians can find. He probably had loads of other work that was lost with time. Explore a few fun facts about this prolific and productive writer.

During his lifetime, Shakespeare didn’t publish his own plays. Others published them after his death. This causes a lot of controversy among historians that argue Shakespeare might not have written some of the plays attributed to him.

The body of William Shakespeare’s plays is vast. But they all fall into three genres, including comedy, tragedy and history. He wrote for the masses of the time, and this is what they wanted to see.

Suicide as a Theme

If you’ve ever taken part in a Shakespearean production, more often than not, you’ve probably been part of a scene that included suicide. Just look at Romeo and Juliet. However, this isn’t a rarity. 13 of Shakespeare’s plays included suicide in them, with another 8 possible. This theme in his tragedy was so prevalent; it’s actually been studied in medical journals.

Many times famous writers don’t become iconic until they have passed away. However, this wasn’t true for Shakespeare. He was famous during his time. So famous that both Queen Elizabeth I and James VI of Scotland approved of his plays. They’d even commission his company to come play for them at court.

The kids and plays are covered. Now it’s time to dive into the unusual facts about William Shakespeare, and there are plenty out there.

In his will, Shakespeare provided a special gift for his wife: the couple’s bed. Before passing, William Shakespeare clarified in his will that beyond a third of the estate and living in the house that she should also receive the bed they shared. According to a new analysis, this was added as a gift for his wife in the final moments of his life.

Shakespeare truly wanted to rest in peace. Those that mess with him were given a solid warning in rhyme, “Good friend, for Jesus’ sake forbear, To dig the dust enclosed here. Blessed be the man that spares these stones, And cursed be he that moves my bones.” However, it doesn’t appear the warning worked because new evidence found the skull of Shakespeare is missing from his tomb.

Acted in One of His Own Plays

In addition to writing his work, he acted in it as well. While he didn’t break out a main role or anything, Shakespeare is known as acting as the Ghost of Hamlet’s father. You've got to keep those acting chops at the ready.

Shakespeare made a name for himself in his time and ours. He actually had a bit of a double life: his London life and Stratford life. In both, he was famous and comfortably middle class. Upon his death, he had property and wealth to leave behind to his wife.

While you might be a bit more familiar with the modern actress Anne Hathaway who played in Alice in Wonderland, Shakespeare’s wife was also named Anne Hathaway. She married the playwright in 1582. At the time of their marriage, Anne was 8 years older than Shakespeare and pregnant. As you can probably guess, the marriage between the two was made official very quickly. The two had three children in total.

Shakespeare Fell Off the Radar

Much of Shakespeare’s life is shrouded in mystery. While historians have some idea of his birth and death, they know very little about what he did before marrying Hathaway in 1582. Additionally, he also disappears from everything from 1585-1592. While there is a lot of speculation out there about what he did during that time, no one actually knows the truth.

While you know the famous play Hamlet drafted by Shakespeare, you might not have known the other famous Hamnet within his family. His only son was named Hamnet, but sadly he died when he was only 11 years old. Shakespeare’s grief over the loss of his son can be seen in his final plays.

There are a lot of different Shakespeare factoids that you might find interesting, and a few might not even be known. Now it’s to look at some funny and famous Shakespearean insults. Then, you might want to explore the life of another famous author with some interesting facts about Dr. Seuss.