20 Baseball Facts That Made History

Whether it's a high-flying home run, a game-saving grounder or a shocking strikeout, the connection of a baseball to a bat thrills audiences around the world. Behind the dramatic moments of a game, however, are the fascinating statistics and facts that make each at-bat worth watching. Learn more about the players, teams and stadiums that make up the rich history of baseball. 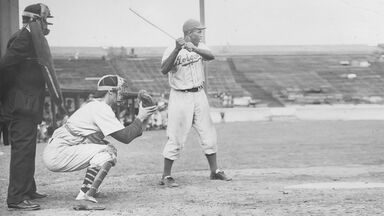 America's national pastime has a history of amazing firsts and surprising records. Take a look at several baseball facts that depict important moments in the sport.

The First MLB Team Was the Cincinnati Red Stockings

Baseball became popular during the Civil War, and even more so when the soldiers brought the game back home. The Cincinnati Base Ball Club (also known as the Cincinnati Red Stockings) was founded in 1866 and was the first baseball team to recruit and pay its players professionally. They played against other ball clubs at the Union Cricket Club Grounds and while touring the U.S.

On April 15, 1947, Jackie Robinson became the first Black person to play for a Major League Baseball (MLB) team after the Negro Leagues were formed. He played first base for the Brooklyn Dodgers for ten years. Prior to joining the Dodgers, Robinson played in the Negro Leagues for one season.

Two Players Played in the MLB for 27 Seasons

Edwin Jackson Played For the Most MLB Teams

In 2019, pitcher Edwin Jackson became the first player in history to play for 14 MLB teams, a feat accomplished within the first 17 years of his still-active career. The previous record was held by Octavio Dotel, also a pitcher. Dotel played for 13 teams during his 15-year MLB career.

John William Lindsey Spent the Most Time in the Minors

Yogi Berra Has the Most World Series Appearances (and Wins)

Two managers share the record for the most World Series wins — and coincidentally, both set their records with the New York Yankees. Joe McCarthy led the Yankees to seven championships during his tenure with the team, which lasted from 1931 through 1946. Casey Stengel's tenure with the Yankees was 1949 through 1960, a time during which the team also won seven World Series championships.

Connie Mack Managed the Most Wins (and the Most Losses)

Connie Mack, who managed the Philadelphia Athletics from 1901 through the 1950 season, is the winningest manager in MLB baseball history. Interestingly, he also has more losses than any other manager. That's because he served as a manager for 50 years. He helped establish the team in Philadelphia after playing for 15 years and serving in management roles for a few more. Due to Mack's longevity in the sport, it's not likely that any manager will ever beat his record for the highest number of wins.

In July of 2020, Alyssa Nakken became the first full-time female MLB head coach, working for the San Francisco Giants. Nakken started working with the Giants in 2014 as a front office intern. She worked in other roles (player development, recruitment, international operations, and health/wellness) before moving to one of the team's assistant coach positions.

Only Three MLB Players Have Hit More Than 700 Home Runs

Cal Ripken, Jr. holds MLB's record for the most consecutive games played. Ripken played MLB from 1982 through the 1998 season. During that time, he played in 2,632 consecutive games. The previous record of 2,130 had been set by Lou Gherig, who retired in 1939. Ripken surpassed Gherig's record in 1995 and went on to finish that season and play three more without missing a game.

Nolan Ryan holds the record for the most career strikeouts in MLB history. He racked up 5,714 strikeouts during his professional baseball career. He became an MLB pitcher in 1966 when he was just 19 years old. He retired in 1993 at the age of 46.

Did you know that the rules of baseball can vary from stadium to stadium? These historic (and beloved) stadiums are as much a part of the sport as the players, managers and statistics.

With a seating capacity of 56,000, Dodger Stadium in Los Angeles is the largest baseball stadium in the United States. It includes 1,000 more seats than the Estadio Latinoamericano in Havana, Cuba, making Dodger Stadium the largest baseball stadium in the world. In 1996, RingCentral Coliseum (also known as the Oakland Coliseum, home of the Oakland Athletics and previously home to the Oakland Raiders) expanded its seating to 63,132, but current use of the stadium limits seating to just over 47,000.

Boston's Fenway Park, home of the Red Sox, has a seating capacity is 37,731, making it the smallest stadium currently being used by an MLB baseball team. It's also the oldest MLB stadium in the United States, having opened in 1912. The stadium has undergone a few renovations since its early days, including the addition of 4,000 seats in 2001.

The World's Oldest Baseball Stadium Is Still in Use

Baseballs Travel Farther in Coors Field Than Other Stadiums

Coors Field in Denver, Colorado is considered to be the most hitter-friendly ballpark in baseball. This has more to do with the stadium's altitude rather than how it is constructed. This park sits at an altitude of nearly a mile above sea level. The 20th row of the park's bleachers is exactly a mile above sea level. The higher the altitude, the lower the air pressure, so baseballs go farther when they are hit.

You Can Watch Diamondbacks Games From the Stadium Pool

The home field of the Arizona Diamondbacks has a swimming pool in the ballpark. Fans who wish to watch the game from the water or poolside have to purchase tickets for the stadium's pool suite. The pool suite holds 35 people. Each year, tickets for the pool suite typically sell out for the season by early May.

The Astrodome Was the First Domed Ballpark in the World

Houston's Astrodome was the world's first domed baseball stadium. Designed to allow baseball games to continue despite extreme weather conditions, the Astrodome served as the home of the Houston Astros from 1965 to 1999. It also housed home games for the Houston Oilers of the NFL and the University of Houston's football team. The stadium was listed on the National Register of Historic Places in 2014 but hasn't been used as a sports arena since the Astros' last game there on October 9, 1999.

Now that you know these cool baseball facts that made history, learn even more about the popular sport. Start by exploring baseball position abbreviations and numbers. From there, learn about baseball scorecards and scorecard abbreviations.