Bears are massive, beautiful mammals. Get to know these impressive and powerful creatures better by discovering some interesting bear facts. Learn about different types of bears, as well as information about how they behave and adorable bear babies. 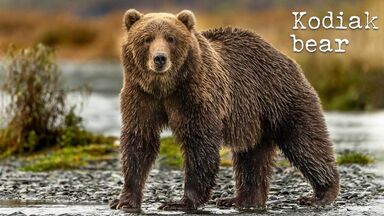 There are several bear species and subspecies. The different types of bears vary in size and appearance, though they do have some common characteristics.

The North American black bear is the most common bear species in North America. It can be found as far south as Florida, through the northwestern portion of Canada and Alaska.

Color Does Not Determine Species

At the opposite end of the size spectrum from polar bears, sun bears are the smallest of all the bear species. They can weigh as little as 60 pounds or as much as 150. Male sun bears tend to be larger than female sun bears.

Size Varies Even Within Species

Similar Characteristics Shared by All Bears

While bears can vary greatly with regards to size and color, all bears share some common physical characteristics. Their bodies are all covered in fur. Their body shape is described as stocky, as they tend to have short legs with large, curved torsos. Their heads are round in shape and they have a long snout.

Discover key facts about how bears behave and live.

Even though bears are classified in the order Carnivora, they actually eat a combination of plants and animals. This means they are omnivores. The majority of their diet consists of vegetation like grasses, berries, nuts, and plants. They also eat insects, fish and other animals.

Bears Live All Over the World

Bears can thrive in a wide variety of habitats. Many bears live in forests or mountainous areas, though some make their homes in grassy or desert terrain. Bears that thrive in extremely cold climates make their homes on the tundra.

Bears create dens for themselves to live in, which are areas they can crawl inside to get safely out of sight. Bears are pretty crafty and resourceful when it comes to creating dens. They often take up residence in hollow tree trunks or caves. They sometimes dig holes themselves, carving out space beneath the roots of a a tree or in the side of a hill. They'll even use piles of brush in a pinch.

Not All Bears Hibernate During Winter

Most, but not all, bears hibernate during the winter months. Some polar bears stay active throughout the year, even though they live in areas that tend to have extremely cold, harsh winters.

The length of time a bear hibernates is based on how cold the climate is. In extremely cold areas, such as the northern region of Alaska, bears may hibernate for as much as seven months of each year. In warmer regions, hibernating bears may do so for as few as two or three months.

Hibernating bears don't leave their dens during the winter, but they don't actually sleep the whole time they are hibernating. They can be awake some of the time and will even move around within their den.

Male bears and female bears have separate territories. They do not live together on an ongoing basis. Instead, male and female bears typically meet up only during mating season. Bears mate during spring and summer.

Adult bears may be large and seem fierce, but they start out small and stay with their mothers for quite a while before venturing out on their own.

Bears Don't Have Babies Every Year

While many animals give birth every year, this is not typical of bears. Female bears reach maturity by the time they are five years old. After reaching maturity, they tend to have babies once every two to four years.

Even though bears mate during the spring, bear babies don't actually start developing inside their mother until the following fall. During late fall, a previously fertilized egg will attach to the mother's uterus. Once this happens, the fetus begins developing. Gestation can take from 194-278 days.

Bear Cubs Are Delivered in Dens

As with all mammals, bear mothers give birth to live babies, which are called cubs. Bears usually give birth to their young in their own dens. Bear cubs are typically born in December or January.

When a bear gives birth, the litter usually has only one or two babies. Less commonly, a bear may give birth to a litter with three or four cubs.

Cubs Depend on Their Mothers

When bear cubs are born, they are defenseless. They are fully dependent on their mothers to feed and protect them. Bear mothers produce fatty milk, which cubs eat for between six and eight months. Bear cubs stay with their mothers through their second spring, then venture out on their own to make their way in the world.

Bears are fascinating, majestic creatures. If you enjoyed learning these bear facts, take the time to explore additional types of animals and their characteristics. From there, investigating more examples of mammals from around the world.