20 Facts About Bacteria: Organisms That Can Help or Harm

While the word bacteria has negative connotations, it's important to know that not all bacteria are bad. Bacteria can actually be helpful. Discover some surprising facts about bacteria, including how these super-important organisms can be both helpful (even necessary) and harmful. 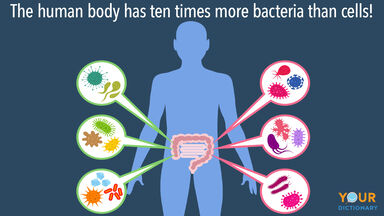 facts about bacteria in the human body
Advertisement

Learning about bacteria is an important aspect of studying Biology. Before exploring how bacteria can be helpful and harmful, it's important to first understand what bacteria are.

Bacteria is a part of existence. There are always bacteria present in the human body and other aspects of the world. Bacteria provide many helpful — even necessary — effects.

Of course, not all bacteria are helpful. There are good bacteria and bad bacteria. The bad ones can definitely be dangerous, even deadly. It's important to know about the risks associated with bacteria and to take precautions, such as properly washing your hands, to avoid infection.

Beyond the Basics of Bacteria

Did you learn anything you didn't already know about bacteria? People are often surprised to discover how important good bacteria really are. It's definitely important to know that bacteria aren't all bad. Learn more about them by exploring examples of different types of bacteria. You might also enjoy learning some bacteria-related information from weird facts about the human body.

Once you are more familiar with bacteria, continue expanding your related knowledge by investigating some examples of fungi. Like bacteria, fungi are microorganisms that can have a significant impact on health and the natural world as a whole.