20 Space Facts for Kids That Are Out of This World

Young learners are sure to be over the moon to discover these fun space facts for kids. Armed with these interesting and educational facts, kids just may develop a lifelong love of astronomy. They'll surely be ready to expand their knowledge with even more fascinating facts about what's out there in space. 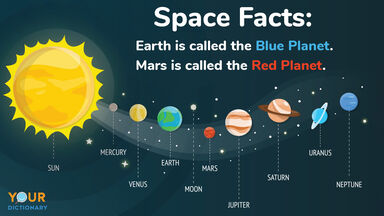 No list of fun facts about space is complete without some information about the planets. It's only natural for Earth's inhabitants to wonder about what the other planets are like!

Of course, there's way more to the Milky Way galaxy than just the planets in the Earth's solar system. The Milky Way offers a whole galaxy of fun space facts to explore!

Get to Know the Dwarf Planets

Your parents and most other adults in your life probably studied space when Pluto was still a planet and dwarf planets didn't exist. You'll be able to wow them with information that's new to them when you master a few facts about the dwarf planets.

When you look up at the sky, it's natural to wonder exactly what is up there in the universe and beyond. These fun and fascinating space facts for kids provide a glimpse beyond the confines of Earth. From here, they can explore and expand what they know by discovering these cool space and astronomy vocabulary words for kids. Don't forget to focus on our own planet with some Earth facts too!