How much do you know about basketball? The familiar team sport is popular on school playgrounds, college courts and in huge professional arenas. But where did the iconic game come from, and how did it grow into the dominating sport you know today? Learn many amazing stats and more with basketball facts for ballers and superfans alike. 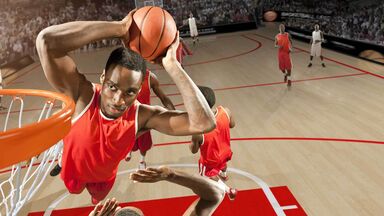 Who invented basketball? How have the rules changed since its invention? Check out these facts about the history of basketball as a sport.

Basketball Was Named After Peach Baskets

In 1891, football (known as soccer in the U.S.) was becoming popular in American colleges. However, players had to find a way to keep busy indoors during the winter offseason. Canadian-American athletic instructor James Naismith developed the game of basketball at Springfield College (then YMCA International Training School) in Springfield, Massachusetts using two peach baskets nailed to the gymnasium walls.

The first basketballs were leftover brown soccer balls. In 1894 A.G.Spalding & Brothers created a brown leather ball just for basketball. It went through more developments in the years that followed but stayed brown until the late 1950s.

The First Basketball Game Ended in a Nasty Fight

The first time Naismith introduced basketball to his students, the game did not go smoothly. As he described in a 1939 radio interview, the former football and rugby players played so roughly and fouled so often that the game ended in a violent free-for-all. Naismith continued to modify his original 13 rules of basketball to ensure that the next games would be more successful.

Dribbling Used to be Illegal

Dribbling was another detail that did not appear in Naismith’s original rules. Originally, basketball players caught the ball and immediately passed it to a teammate without running at all. Players would skirt this rule by dropping the ball once, repositioning, then catching the ball and shooting it. By 1910, players were allowed to dribble but dribblers weren’t allowed to shoot until 1916.

Backboards Were Invented to Keep Fans From Interfering

The iconic basketball backboard is a part of everyday gameplay — in fact, there would be no rebounds without it. But the first backboards were added to basketball games in 1893 to keep fans from blocking shots and interfering with the game. These backboards were made with chicken wire, but injuries to fans prompted the necessity of wooden backboards in 1904. Glass backboards became common just a few years later in 1909, and today, backboards are typically made from fiberglass.

The Three-Point Line Was the Result of Competing Leagues

Basketball Became an Olympic Sport in 1936

Professional Basketball Players Couldn’t Compete in the Olympics Until 1992

The Olympics had been founded upon competition between amateur athletes, not professionals. But when the International Olympic Committee relaxed these rules in the 1980s, professional athletes — including NBA players — were allowed to compete. The 1992 Olympic Games in Barcelona were the first time professional athletes were included in Team USA, and the U.S. men's national basketball team was dubbed "the Dream Team," as the roster was made up almost entirely of NBA champions. Since then, many professional basketball players have competed on their home country teams.

Known as basketball superstars, members of NBA and WNBA (Women’s National Basketball Association) teams hold impressive records on and off the professional court. See how talented players became legends in their sport.

Basketball star Vince Carter officially retired from the sport after the 2020 season, following 22 years playing in the NBA. No other player has played in the NBA for this many years. Throughout his extensive professional career, he played in 1,541 games.

Basketball legend Robert Parish holds the record for playing in more NBA games than any other player. He played in 1,611 games throughout his 21-year career, which included winning championships with the Boston Celtics and Chicago Bulls. He is 50 games ahead of the player with the second-most games (Kareem Abdul-Jabaar).

Kareem Abdul-Jabaar Holds the Record for Most Points

Kareem Abdul-Jabaar holds the all-time NBA record for most points scored. He scored 38,387 points throughout his legendary 20-year NBA career.

On July 17, 2018, Liz Cambage of the Dallas Wings broke the WNBA's previous single-game scoring record. The Australian point guard scored a total of 53 points in a game against the New York Liberty.

Wilt Chamberlain holds the NBA all-time record for the most rebounds. He achieved 23,924 rebounds during his 14-year playing career (including 55 in a single game) for an average of 22.89 rebounds per game!

Wilt Chamberlain also holds the single-game scoring record. He scored 100 points on March 2, 1962, while playing for the Philadelphia Warriors against the New York Knicks. His playing led to the league changing some rules, which is possibly why no one has been able to match his single-game achievement.

In 2006, Kobe Bryant came closer to Chamberlain's single-game scoring record than anyone else. He scored 81 points for the Los Angeles Lakers in a 2006 game against the Toronto Raptors.

Diana Taurasi Is 131-7 in USA Basketball

Diana Taurasi, who holds the WNBA record for scoring over 9,000 career points, has only lost 7 games in a USA Basketball uniform. She also holds four Olympic gold medals, three FIBA World Cup golds and made the WNBA All-Stars 11 times.

Lisa Leslie, Sheryl Swoopes and Lauren Jackson Are Tied for Most WNBA MVPs

Most fans can remember the best NBA or WNBA game of their life. Whether it was a satisfying blowout or a thrilling buzzer-beater, you never forget those record-setting games. Learn more about the amazing games and talented coaches of the NBA and the WNBA.

The Longest NBA Game Ever Went Into Six Overtimes

The longest NBA game in history took place on January 6, 1951, between the Rochester Royals and the Indianapolis Olympians. The game, which is listed in Guinness World Records, included 78 minutes of gameplay and six overtimes (another record). The Olympians finally managed to win with a final score of 75–73.

Imagine a game where each team scores over 180 points. It actually happened on December 13, 1983, when the Detroit Pistons beat the Denver Nuggets 186-184 in triple overtime. Four players (Isiah Thomas, John Long, Kiki Vandeweghe, and Alex English) scored over 40 points each, and the game included an incredible 93 assists and 113 rebounds!

The Buffalo Braves Scored 58 Points in One Quarter

The Buffalo Braves were down by 43 points when they entered the fourth quarter of their October 20, 1972 game against the Boston Celtics. Amazingly, they scored 58 points in the final quarter of the game. While the Braves ended up losing by eight points, they outscored the dominant Celtics 2 to 1 in the final minutes of the game.

In 1966, Bill Russell became the first Black head coach in the NBA. Russell joined the Boston Celtics as a player in 1956 and remained with the team through 1969. He continued playing after being elevated to head coach, so he served as a player-coach the last three years he was with the team.

Phil Jackson Has Coached the Most NBA Championship Teams

Gregg Popovich Has Coached the Same Team for 25 Years

Gregg Popovich holds the record for the longest head coaching career with the same NBA team. He started coaching the San Antonio Spurs in 1996 and is still with the team as of the 2020/2021 season. Popovich holds the single-team tenure record across multiple major league sports beyond the NBA, including the National Football League (NFL), National Hockey League (NHL) and Major League Baseball (MLB).

The WNBA Was Not the First Women’s Basketball League

In 1996, the NBA's Board of Governors voted to approve the formation of the WNBA. However, women had been playing high-level basketball for decades before the first WNBA game in 1997. The first World Championship for women’s basketball took place in 1953, with the U.S. team taking the trophy.

As of 2021, only a third of the WNBA teams have female head coaches. Four teams (Atlanta Dream, Indiana Fever, Minnesota Lynx, and Phoenix Mercury) are headed up by female coaches. The remaining eight teams have a man in the head coaching role.

These are just a few of the many interesting facts about the sport of basketball. Now that you have insight into some of the most interesting and impressive basketball facts, learn some basketball slang so you can discuss the sport like a pro. Prepare to wow everyone with your knowledge of sports trivia. Then, get motivated to compete with some inspirational sports quotes.