You don't have to be a monkey to love bananas! Whether you're tossing one into a smoothie or eating it on the go, the health benefits of bananas can support you all day long. Discover several fun facts about the a-peeling fruit in your breakfast. 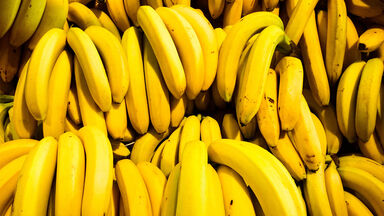 bunch of bananas at market
Advertisement

Did you know that bananas aren't always yellow? They can be pink or even red! Learn more with these off-the-beaten-path banana facts.

Banan is Arabic for ‘Finger’

While the Cavendish bananas we know today can be several inches long, the original bananas from southeast Asia were about as long as a finger. That's why traders from Persia, India and Arabia called the fruit banan — the Arabic word for "finger."

You Really Can Slip on a Banana Peel

It's one of the oldest gags in comedy, but slipping on a banana peel really is possible. Mucosal fluid inside banana peels (which is similar to the lubricating fluid between your joints) makes the peels much more likely to slide across a smooth surface. The Japanese research team who investigated this phenomenon earned an Ig Nobel award and helped scientists discover more about the lubrication in human limbs.

Modern Bananas Exist Because of an Agricultural Disease

People who remember eating bananas in the 1950s may have noticed that modern bananas taste a little different. That's because the most common type of bananas used to be the Gros Michel breed, which was nearly wiped out by Panama disease in the middle of the 20th century. Cavendish bananas, which were immune to that strain of Panama disease, became the replacement for banana growers around the world.

People With Latex Allergies Are Often Also Allergic to Bananas

Allergic to latex? Chances are that you're probably also allergic to bananas. Latex allergies are associated with a type of protein found in rubber trees, banana trees and some nut trees.

You're Probably Peeling Your Banana Wrong

The top of a banana is the stem, which is the toughest part of the peel. So why are you opening it from that side? The best way to peel a banana is actually from the bottom. Just pinch the bottom until the peel splits, then pull the peel down normally.

You Can Make Wine From Bananas (and the Peels)

Wine isn't always made from grapes; fruit wine is growing in popularity. Banana wine provides an interesting tropical take on vino. It's made with both the fruit and the peels!

Bananas Are Useful Around The House

Bananas aren't just delicious — they're helpful household products. Bananas can polish your shoes, help with itchy bug bites and keep chicken breasts moist. You can even use them as part of your spa treatment!

Bananas may be an essential part of a banana split, but they're also part of a healthy diet. Discover some of this tasty treat's many benefits from a health and nutrition perspective.

Due to their high level of sugar, bananas can raise blood sugar in the body. But unlike other sugary foods, bananas are also very high in fiber, which means that the blood sugar rises slowly without spiking. That's why digesting bananas can keep your blood sugar stable for longer periods of time.

One Banana Includes 10% of Your Daily Fiber

Bananas are so high in fiber that just one banana provides 10% of an adult's daily value. That's the fiber equivalent of 23 almonds or two whole carrots!

The chemical composition of bananas changes quite a bit during the ripening process. Green, unripe bananas have 80% starch, which is why your mouth might feel dry after eating them. As they ripen, that starch converts to sugar, resulting in yellow bananas containing less than 1% starch (and a much sweeter flavor).

Bananas Help You Recover From a Workout

The next time you have a tough workout, make sure to pack a banana! The water and sugar content in a banana helps your body to remain hydrated and regulated. Bananas also help your muscles absorb protein, which makes them stronger.

Adding Bananas to Your Diet Can Lower Your Heart Attack Risk

The potassium in bananas can impact the hardening of arteries and the buildup of blockages, which are two major risk factors for heart attacks. Accordingly, not eating enough potassium could lead to a higher chance of heart problems. But don't worry — just two bananas (3,500 mg. of potassium) a day is enough to keep your blood moving efficiently.

Bananas Can Replace Oil or Eggs in Your Baking

Looking to reduce that fat in your favorite baking recipes? Replace up to half the oil with mashed banana. You can also make your recipe vegan by replacing a large egg with a banana. (Just keep in mind that this will increase the sugar content.)

Are banana plants more closely related to herbs or apple trees? How can banana plants reproduce without seeds? Learn more about how bananas grow with these peculiar plant facts.

Bananas Are a Type of Berry

Bananas are actually classified as berries. Botanically, a fruit that grows from one flower that has only one ovary is a berry. (Interestingly, strawberries aren’t considered berries for the same reason.)

Not only are bananas berries, but they don't actually grow on trees. The large flowering plant that grows bananas is often mistaken for a tree, but it's actually a type of herb. What resembles the trunk of the banana "tree" is actually a roll of tightly packed leaves from an underground bulb.

One Banana Plant Can Produce Over 200 Bananas

It takes several months for a banana plant to reach maturity, but when it does, it’s capable of growing hundreds of bananas in one season. One banana plant can grow up to 12 rows (or "hands") of bananas, each of which contains up to 20 bananas (or "fingers.")

If you ever see bananas growing in the wild, you might be tempted to pick a few and eat them. But wild bananas are quite different from the bananas you buy in the store — in fact, they're practically inedible. Wild bananas are packed with seeds, so you can't eat them raw. In Southeast Asia and other areas, people deseed wild bananas and use them in their cooking and baking.

Unlike fruit trees, banana plants only produce one season of fruit before dying. But that doesn't mean the bananas will stop coming. Adult banana trees reproduce asexually by creating "suckers," or baby banana offshoots, before dying. These baby plants grow in the adult's place and are ready to produce fruit in nine months or so.

Commercial Banana Plants Are Genetically Identical to Each Other

Because banana plants can create their own offspring without pollination, the fruit of their offspring plants is a clone of their own fruit. In the case of the Cavendish banana, which accounts for 99% of the world's banana exports, every banana is genetically identical to the other bananas in the store. However, the lack of genetic diversity puts the Cavendish in danger of extinction.

Banana Facts From Around the World

Bananas are an essential part of the agricultural industry and worldwide food supply. Check out these facts about bananas and their impact around the globe.

Bananas Are the Fourth Most Important Crop in the World

Bananas follow wheat, rice and maize as the fourth most important crop in the world. Both a significant food staple and a source of income for high-growing countries, bananas are becoming even more popular in many countries.

Most Bananas Are Not Grown in North America

While Americans eat a lot of bananas, not many are grown there. Some are grown commercially in Hawaii and Florida, but most bananas eaten in the U.S. are imported from Latin America and South America. In fact, Ecuador is the largest banana exporter in the world.

Banana Ketchup Is Popular in the Philippines

In the Philippines, banana ketchup is a popular condiment that's a household staple. People eat it on hamburgers, omelets and just about anything traditional tomato-based ketchup would be used on.

Americans Eat More Bananas Than Any Other Type of Fruit

In the United States, people eat more bananas than any other fresh fruit, even apples and oranges. On average, each person in the U.S. eats around 27 pounds of bananas per year. However, this number is tiny compared to the number of bananas eaten by people in Ghana, which is around two bananas a day (over 600 pounds a year per person).

Bananas Are Cooking Staples Around the World

Bananas and plantains (a smaller, tougher type of banana) are commonly used as cooking staples in many cultures. In Uganda, for example, the Matoke banana is peeled, steamed and mashed much like potatoes. And in Central America and South America, plantains are a major part of many popular dishes.

The Banana Plant Is Sacred in India

Bananas are native to India, which is the largest banana producer in the world. The abundance and variety of bananas available in India have led to the banana's reputation as a healing food, a symbol of fertility and a dietary mainstay. The leaves of the banana plant are often woven alongside cotton in clothing.

Go Bananas With Your Food

Discovering fun facts about bananas is just one of the many ways to have fun with food. For even more culinary cut-ups, check out these food pun examples. You're sure to have an egg-cellent time!