25 Fun Food Facts That Are Weird But True

Every day, you eat a variety of foods to keep you healthy and energized. But is there more to your favorite foods than you think? These 25 fun food facts may seem too weird to be real — but they’re true. 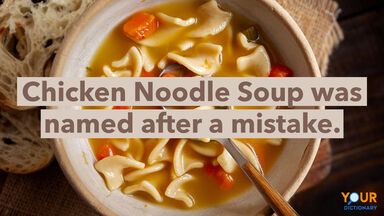 Is a tomato a fruit or a vegetable? It’s actually both — botanically, tomatoes are part of the fruit family, but in the kitchen, they are always prepared alongside vegetables. Take a look at more surprising facts about fruits and vegetables.

Strawberries are an aggregate fruit because they come from a flower with more than one ovary (berries come from flowers with only one ovary). Berries also have their seeds on the inside of the fruit, so blackberries and raspberries aren't berries, either. Bananas, kiwis and cucumbers are examples of true berries!

Fresh Cranberries Have to Pass a Bounce Test

Cranberries have tiny pockets of air that make them bounce when they are firm and fresh. Cranberry farmers often bounce them as part of a quality test. Cranberries that are older and riper don't bounce because they lack the air present in fresh berries, so they are discarded.

Supermarket Bananas Are Clones of the Same Banana

Fruits and vegetables reproduce from seeds. So how does the common Cavendish banana, which is found in the supermarket and has no seeds, create offspring? Farmers grow these bananas asexually, which means that they often use cuttings from underground stems. Because these bananas are not genetically diverse, scientists are concerned that they could be vulnerable to fungus and disease.

Avocados Don’t Ripen on the Tree

If you’re waiting for those green avocados on your tree to ripen, you’ll be waiting a long time. Like peaches, plums and tomatoes, avocados are climacteric, which means that they continue to ripen after being picked. But unlike those other fruits, avocados actually can’t start ripening until they’re disconnected from their stems. You can leave avocados on the tree for up to eight months without worrying that they’ll go bad!

Apples Are More Closely Related to Roses Than Oranges

Comparing two unlike items with the expression "apples and oranges” is even more apt than you think. Even though apples and oranges are both fruits, they're not from the same family at all. Apples, as well as cherries, apricots and pears, are from the family Rosaceae, which is the rose family. Oranges and all other citrus fruit are from the family Rutaceae. The two fruits haven't had a common ancestor in nearly 90 million years!

Spinach Is Not Extraordinarily Rich in Iron

You may have heard that 1920s comic strip character Popeye's favorite food, spinach, is a great source of iron. While that's not untrue, it's not quite as iron-rich as its reputation says. One story claims that a misplaced decimal point in 1870 showed that spinach had 35 grams of iron instead of its actual 3.5 grams. Another story indicates that the miscalculation was due to contaminated laboratory equipment. Either way, we now know that spinach contains about the same amount of iron as other leafy vegetables.

One Cup of Kale Has More Vitamin C Than an Orange

When you're looking to boost your immunity with vitamin C, you may pour yourself a glass of orange juice. However, just one cup of kale contains more vitamin C than an entire orange! Kale is also high in vitamin A, vitamin K and calcium.

Corn Is Related to Grass

Corn is from the grass family (Poaceae), as are wheat, oats and rice. These species grow much longer than grass and are considered to be grains. Despite this classification, corn is considered by many to be in the vegetable family.

Garlic Is One of the Most Nutritious Foods on Earth

Despite its reputation for creating bad breath (and repelling vampires), garlic is considered one of the most nutrient-dense foods you can eat. Just one clove of garlic contains 0.2 grams of protein and 2% of your vitamin B6 for the day. Allicin, which gives garlic its distinctive flavor, is said to lower cholesterol and blood pressure as well. No wonder garlic is one of mankind’s earliest medicines!

Did you know that hamburgers (which contain no ham) are named for the city of Hamburg in Germany, where the popular raw “Hamburg Steak” originated? Full-fledged carnivores and total vegans alike can enjoy more tasty tidbits about meat, eggs and seafood.

Imagine cracking and frying 24 chicken eggs at once. It would weigh about 3 pounds, which is the same weight as one ostrich egg. Ostrich eggs contain 2,000 calories, which is the recommended daily calorie intake for the average adult.

No One Knows What SPAM Stands For

SPAM, the canned meat made popular during World War II, is a staple in many households. But what is the name SPAM short for? While some believe the name is a portmanteau of “spiced ham,” the meat mixture contains no spices (only salt and sugar) and minimal amounts of ham. Other proposed meanings are “Shoulder of Pork and Ham,” “Salt, Pork and Ham,” and even “Specially Processed American Meat.” Even Hormel, the company that makes Spam, isn’t sure.

Sardines Are One of the Healthiest Fish

Like most fish, sardines are high in omega-3 fatty acids, which prevent heart attacks and lower blood pressure. But unlike larger types of fish, sardines only eat plankton, which means that their mercury levels are low. Sardines are also a great source of vitamin B-12 and vitamin D, calcium, iron, potassium, and protein. Unfortunately, sardines are in danger of being overfished.

Chicken Noodle Soup Was Named After a Mistake

In 1934, Campbell’s Soup combined broth, chicken and noodles in its "Noodle with Chicken Soup.” However, when a radio commercial announcer misread his script, he accidentally said "Chicken Noodle Soup." Campbell's officially changed the name a few weeks later, and it's been Chicken Noodle Soup ever since.

Farm-Raised Salmon Is Not Naturally Pink

How would you feel if your salmon dish was gray instead of its characteristic pink color? While wild salmon meat is pink because of the shrimp in its diet, salmon raised in fish farms have a different diet, so their meat is gray. Farmers have to add carotenoids, red pigmenting compounds found in algae, to the salmon feed. That way, farm-raised salmon looks the same as wild salmon.

Lobsters Used to Be Prison Food

Lobster fishing was so common in the colonial era that it was much cheaper than other meats. That's why it was usually fed to prisoners and servants instead of more prominent members of society. When New England cities became urbanized, fresh lobster was known as a specialty — and a delicacy. Today, lobster is likely to be the most expensive item on a restaurant menu.

Gelatin Is Not Vegan (Or Even Vegetarian)

It may seem like jiggly Jell-O and puffy marshmallows could be part of a meat-free diet. However, the gelatin in these foods is made from boiling animal parts, including skin, bones and cartilage. Fortunately, you can find vegan-friendly Jell-O and marshmallows that are made with tapioca and agar agar.

Other Amazing Facts About Food

Did you eat pizza today? If so, you’re joining the 40 million Americans who eat pizza on any given day — that’s 13% of the entire population! Go for second helpings with these amazing facts about spices, snacks, sandwiches, and more.

Some Red Food Dye Is Made From Bugs

That bright red color found in maraschino cherries, red candy and fruit-flavored drinks doesn't seem natural — but it often is. Carmine or cochineal extract is made from cochineals, which are an insect found in South America. Many people are grossed out by this fact, but other food dyes (such as the popular red dye #40) are made from coal and petroleum byproducts, which are far less natural than bug extracts.

Sandwiches Were Supposedly Invented Because of Gambling

The Earl of Sandwich, less formally known as John Montagu, is credited for inventing the sandwich. The story is based on the Earl's participation in a 24-hour gambling streak in the late 1700s, which kept him hungry but unwilling to leave the table. His need for a quick, handheld meal was supposedly the birth of one of the most popular food items in the world. While the story may be more legend than history, it’s a great way to think about the convenience of a sandwich.

Saffron is one of the most expensive spices in the world, and for good reason. The saffron flower only blooms during a short period of the year, and it must be harvested the day that it blooms. The only part used in the harvesting is the flower's stigmas — and each flower only has three of the tiny red threads. That's why it takes 75,000 saffron flowers to create one pound of dried saffron.

Does it feel like your mouth is burning when you eat spicy foods? That's because most foods made with chili peppers contain a chemical called capsaicin. It tricks the pain receptors on your nerves and sends a message to your brain that your tongue is in pain and must be burning. That's why your mouth feels burned and you may even sweat and turn red: your brain sends physical reactions as if you were actually burned.

Don't throw away that jar of honey in your kitchen! Honey is the only food in existence that never spoils, due to its high amount of sugar and low moisture. In addition, it contains an enzyme created by bees that can suppress bacterial growth. Incorrectly storing honey can expose it to additional moisture, which can lead to spoilage. But in general, honey that is covered and stored correctly has no expiration date.

Almonds Are Not Nuts

You may be surprised to learn that almonds, a popular healthy nut, are not actually nuts at all. They are seeds of the almond fruit, which grows on the almond tree. The almond fruit is soft like a peach. Also like a peach, it has a pit, which farmers remove and shell to find the almond kernel people eat today.

Pound Cake Is Named for Its Measurements

Everyone loves a delicious slice of pound cake. But not everyone knows that pound cake is named for its original ingredients: one pound of butter, one pound of eggs and one pound of sugar. The finished product often weighed nearly four pounds! Modern pound cake kept the name of the original recipe but uses different measurements of ingredients.

One Out of Four Hazelnuts Is Used in Nutella

If you love the delicious chocolate-hazelnut spread Nutella, you're not alone. Nutella is so popular that it uses one of every four hazelnuts grown on Earth, particularly hazelnuts from Turkey. Just one jar of Nutella contains around 50 hazelnuts. But between the high demand and climate change, hazelnut supply may be in jeopardy in years to come.

Ever wonder how fruit snacks get that squishy texture and shiny appearance? The answer isn't just in the corn syrup and gelatin from which they're made. Fruit snacks contain carnauba wax from palm tree leaves, which is also found in car wax, surfboard wax, dental floss, and shoe polish.

You Have Good Taste

Now you know a lot more about your favorite foods, and maybe some facts you wish you didn't know! Dive even deeper into your favorite nostalgic foods by learning whether baloney or bologna is the correct spelling of the lunch meat. Then, the next time you're writing about something delicious or disgusting, use these descriptive words for food to show your good taste. Or if you want a giggle, check out these food pun examples that are perfect for your next dinner party.