25 Soccer Facts Anyone Will Get a Kick Out Of

Millions of soccer fans know the thrill of that single word over the loudspeaker: "GOAL!" Even soccer beginners hold their breath as the ball soars over the players' heads and lands perfectly in front of the net. Whether you're a hardcore soccer enthusiast or just enjoy kicking the ball around a little, you're sure to get a kick out of these 19 soccer facts. 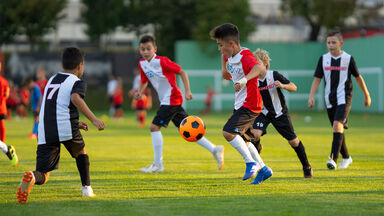 The Amazing History of Soccer

Soccer, or association football as it's known around the world, has many origins around the world. From its early versions among indigenous tribes to the first football match in the 19th century, the history of soccer is a fascinating story of teamwork and recreation.

The Origins of Soccer Come From Over 2,000 Years Ago

The earliest records of soccer come with the Chinese game of cuju that originated in the Han Dynasty (206 B.C.-A.D. 220). The goal was for a circle of players to kick the ball into the air to each other without letting the ball drop to the ground. Ancient Greek and Roman groups played several ball games with their feet, as did ancient tribes in North American and Maori tribes. The version of soccer that we play today is most closely linked to medieval festivals in England, Ireland and Scotland.

Modern Soccer Was Invented By Prisoners Without Hands

One of the earliest recorded instances of modern team soccer was at London Newgate Prison in the early 1800s. Prisoners who had been convicted of stealing were punished by having their hands cut off. They applied the general rules of a ball-kicking game with the necessary addition of playing without hands. This rule became a feature of modern soccer.

Only Americans and Canadians call the game soccer, while the rest of the world calls it football (named for the fact that it's not played on horseback). So where did "soccer" come from? The answer comes from the sport's official name: Association Football. "Soccer" was a nickname using the "soc" part of "Association. The name stuck in America and differentiates the sport from American football, also known as gridiron football.

One of the reasons soccer is played all over the world is that it came along with European colonialism. Soldiers stationed in these colonies would often play pick-up games and invite locals to join them. Some countries previously under European control, including countries in South America, Latin America, Africa, and South Asia, continue to embrace soccer long after reaching their independence. Brazil, previously under Portuguese rule, is one of the most prominent countries in the soccer-playing world.

The Oldest Existing Football Club Was Founded 150 Years Ago

Sheffield F.C., the world's oldest non-league club, was formed on October 24th, 1857, though it didn't join the Football Association until 1863. League club Notts County was founded in 1862 and is the oldest club league in the world. Both teams still play today.

There Were Two Unofficial World Cup Tournaments in 1942

The first official FIFA World Cup took place in 1930 in Uruguay and has been played every four years since — except in 1942 and 1946. The 1942 tournament was canceled after Germany (who was one of the possible host countries) invaded Poland in 1939, and the 1946 World Cup Tournament couldn't be organized so quickly after World War II ended in 1945.

However, 12 teams participated in an unofficial World Cup in Patagonia, Argentina. Another unofficial tournament took place between Nazi Germany and Sweden in 1942. Sweden won the tournament, the players didn't receive a trophy and the German team had to enlist in the armed forces.

Bena Tshadi, a soccer team in the Democratic Republic of Congo, was on the pitch in October 1998 when a bolt of lightning struck and killed all 11 members of the team. Over 30 spectators were burned, but the players on Basanga, the visiting team, were untouched. Many locals believed that the event was caused by witchcraft.

Soccer may have begun as a working man's sport in Europe, but it's now a professional powerhouse. Some of the most talented athletes in the world grew up playing soccer. Check out their incredible records and statistics below.

Pelé, regarded by many to be the greatest soccer player of all time, scored 1,279 goals in his 1,363 total career matches. He holds the Guinness World Record for most goals scored by an individual in a specified period. Pelé holds a second Guinness World Record, as well: the most wins of the FIFA World Cup by a player.

Cristiano Ronaldo Can Jump Higher Than an Olympic High Jumper

Cristiano Ronaldo of Portugal has the record for most goals scored by an active player. He is the leading goalscorer for his club Real Madrid and holds the record for most goals in the FIFA World Cup and the UEFA Champions League. One of the reasons why Ronaldo can score so often is that he can jump 2.56 meters — 0.13 meters higher than the Olympic record set by Cuban high jumper Javier Sotomayor in 1993.

The mention of Argentine Diego Maradona's name is sure to receive a mixed reaction among soccer fans. Many believe Maradona to be the greatest soccer player ever, while others disliked his controversial behavior on and off the pitch. One example of Maradona's divisive reputation came to light in the 1986 World Cup when he famously scored the game-winning goal using his hand. Maradona later commented that the goal "was scored a little bit by the hand of God, a little by the head of Maradona."

The Fastest Red Card Occurred After 2 Seconds of Gameplay

In 2000, Cross Farm Park Celtic player Lee Todd received a red card after swearing about the volume of the whistle only two seconds after the match had begun. He was immediately sent off the pitch and banned from play for over a month.

The USA Women's Team Has Won Four World Cups Since 1991

While the FIFA World Cup has been in play since 1930, the first FIFA Women's World Cup was held over 60 years later in 1991. The USA women's team won the tournament in the final match against Norway and then three additional times in 1999, 2015 and 2019. Germany has won the Women's World Cup twice, while Japan and Norway have each won once.

The USA Men's Team Has Never Won a World Cup

While the USA women's soccer team has been successful in the World Cup, the men's team has never brought home the trophy. The men's team was third runner-up but has never reached the final match. Brazil has won five World Cups, Italy and Germany have won four each, Uruguay, Argentina and France have won two each, and England and Spain have each won once.

Over Half the Global Population Watched the 2020 World Cup

An unbelievable 3.572 billion people around the world tuned in to watch the 2018 World Cup tournament that ended with a final match between France and Croatia. It was the third-most viewed television broadcast at the time, following the 2012 London Summer Olympics and the 2016 Rio Summer Olympics. The 2018 World Cup had 150 million more viewers than the 1998 World Cup, which had been the highest viewed World Cup to that point. The most-watched Women's World Cup was in 2019 with 1.12 billion viewers.

Norway Is the Only Country Undefeated By Brazil

Brazil, home of soccer champions Pele, Ronaldo and Ronaldinho, has never beaten Norway in a soccer match. Norway holds the distinction of being the only country that has never lost in a match against Brazil (they have won twice, in 1997 and 1998 and ended in a draw twice, in 1988 and 2006).

There are so many more wonderful facts about soccer. Keep reading for more information about the most popular game in the world!

Over 250 Million People Around the World Play Soccer

Soccer and association football are the national sports of many countries around the world, but they are played nearly everywhere. In fact, over 250 million people, including professional athletes, college players, high school teams, and children in soccer leagues play soccer in over 200 countries.

One in 20 Injuries Occurs When Celebrating a Goal

Like all sports, soccer is known to have its fair share of player injuries. But you may not know that 1 in 20 of those injuries don't come from an errant kick or elbow — they come from celebrating a goal with your team! Fortunately, these injuries are not usually the more serious soccer injuries you'll see.

Players Run Up to 10 Miles During a Game

At 110-120 yards, a FIFA soccer pitch is more than twice as long as a regulation American football field (53.3 yards). That means that between offensive and defensive play, team members constantly run up and down the pitch. An average soccer game results in players running 5-10 miles a game, depending on their position.

It's Pitch, Not Field

Don't call the place where soccer games take place a field! It's called a pitch for a reason. Soccer pitches are literally pitched at a 1-5% slope on one side (the highest point is usually 10-18 inches above the lowest point). This creates optimal drainage so the pitch doesn't flood. Teams typically switch goals halfway through the game so that each team has to play on the uphill side once.

It seems like red and yellow cards are as old as the game of soccer itself, but that's not so. Soccer didn't even use referees until 1891; the players made the calls based on sportsmanship. But Ken Aston, a teacher-turned-referee, oversaw the 1962 World Cup which was overrun with conflict and fighting. He thought of a simple way to regulate discipline during the game: yellow means "take it easy," red means "stop." The cards made their debut at the 1970 World Cup in Mexico and became part of the game from that point on.

The 32 Panels on a Soccer Ball Are Symbolic

Did you know that a soccer ball is not actually round? It's more of an oval shape, but the distinctive pattern of 12 black pentagons and 20 white hexagons makes it look more like a sphere. The 32 shapes stand for the 32 nations of Europe, although a ball doesn't need to have this pattern to be regulation (the 2014 World Cup official ball, the Adidas Brazuca, had only 6 panels instead of 32).

Greenland Has Never Had a FIFA Team

Although nearly 100 soccer-playing countries have a team in FIFA, Greenland isn't one of them. The country does not have enough grass for a regulation pitch, and therefore has never been eligible to enter the World Cup Tournament. That doesn't mean they don't play soccer; association football is still the national sport of Greenland.

Soccer Is The Only Major Sport That Doesn't Allow Hands

According to FIFA's Laws of the Game, the Hand Rule forbids players to "handle the ball deliberately." That doesn't mean that you can't allow the ball to hit your hand or arm during gameplay, since that is not a deliberate action. Soccer is the only major sport with such a rule — even hockey allows hand passes on the ice!

Soccer Games Can End in a Draw, But Not Always

Some people criticize soccer because it can end in a tie, meaning that there is no winner. While this is true in league games where teams share the points, knockout games (such as the World Cup Tournament) cannot end in a draw. These games often provide 30 minutes of overtime for teams to break the tie. If the tie remains, they have a PK shootout, in which five players from each team take a penalty kick. Whoever scores the most goals wins the game.

The World of Sports

The history, statistics and trivia of soccer make the game even more fascinating to watch and play. Whether you're cheering from the bench or the couch, learn these perfect soccer cheers for your next match. If you'd like to learn more about different sports, check out these basic baseball stats abbreviations.