There is much more to Black history than what is covered in textbooks and school classes. Expand your knowledge about African American culture and history by discovering these fascinating yet little-known Black history facts, organized in chronological order. 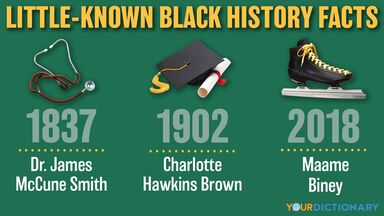 Discover some relatively unknown Black history facts from the early days of the United States.

The slave Onesimus is credited with introducing the concept of inoculation against disease to the colonies in the early 1700s. Onesimus told slaveowner Cotton Mather about how he had received an inoculation against smallpox when he lived in West Africa. This was Mather's introduction to the concept of inoculation. This knowledge was used to fight Boston's 1721 smallpox epidemic, long before the smallpox vaccine was introduced in 1796.

In 1837, James McCune Smith became the first African American to receive a medical degree. However, he did not receive his degree in America. After graduating from the African Free School in New York, Smith went to Scotland. There, he earned three degrees from Glasgow University. He returned to the U.S. to practice medicine. He became an abolitionist and helped found the National Council of Colored People.

In 1900, William H. Carney became the first African American to receive the Medal of Honor. Born into slavery in 1840, at the age of 23 Carney joined the Union Army and fought in the Civil War. After the war, he was awarded the Medal of Honor for protecting the flag during the fighting at Fort Wagner, even though he suffered injuries that nearly claimed his life.

In 1902, at the age of 18, Charlotte Hawkins Brown became the first Black woman in North Carolina to found a private school for Black children. There were other similar schools in the state and country, but Palmer Memorial Institute, Brown's school, was the first to provide students with a college preparatory education. The other schools for Black children stopped after primary education. The campus is now a designated historic site operated by the state.

The Negro Travlers Green Book was first published in 1936 and continued to be published for 30 years. This guidebook provided African Americans with a list of businesses willing to have them as customers to help keep them safe when traveling. It included hotels, boarding houses, restaurants, service stations, and other businesses that travelers need while on the road.

In 1940, actress Hattie McDaniel became the first Black person to win an Oscar from the Academy of Motion Picture Arts and Sciences. She was awarded the Best Supporting Actress Oscar for her role as Mammy in Gone With the Wind.

In 1908, the Alpha Kappa Alpha sorority was founded at Howard University, becoming the first Greek sorority specifically for Black women enrolled in college. Starting with just nine members at one HBCU campus, AKA now has more than 1,000 chapters throughout the U.S. and nearly 300,000 members and alumni. Some of the group's most famous alumni include former Surgeon General Regina Benjamin, poet Maya Angelou, author Toni Morrison, and journalist Star Jones.

The United Negro College Fund (UNCF) was founded in 1944. The nonprofit organization provides financial support to historically Black colleges and universities (HBCUs) and awards scholarships to African American students. The group also actively advocates to ensure that higher education is accessible to minority students. The organization's long-time motto is "A mind is a terrible thing to waste."

In 1955, several months before Rosa Parks refused to move to the back of the bus, Claudette Colvin also refused to give up her seat. The 15-year-old high schooler was a passenger on the same Montgomery, Alabama bus system that Rosa Parks later challenged, though this is among relatively unknown Black history facts. Colvin was arrested and went on to become a plaintiff in Browder v. Gayle, which led to the bus system’s policy of segregation to be unconstitutional.

Discover some of the lesser-publicized facts about black history that occurred between 1960 and the end of the 21st century.

John Lewis was among a group of Black students who participated in a series of sit-ins at whites-only lunch counters in Nashville, Tennessee during 1960, long before he was injured on Bloody Sunday in Selma. It was during the early civil rights protests in Nashville that Lewis was arrested for the first time. Thus began his long and storied civil disobedience career that started with “good trouble” in the pursuit for racial equality and ending with a seat in the U.S. House of Representatives.

After lifelong Mississippi resident Fannie Lou Hamer registered to vote in 1962, she was fired from her lifelong job working as a sharecropper for doing so. She had begun working in the fields when she was just six years old, so it was the only life she had ever known. She went on to found and lead the Mississippi Freedom Democratic Party and participated in the Student Nonviolent Coordinating Committee (SNCC) in her quest for educational equality.

Long before the Oprah Winfrey show, Oprah Winfrey showed signs of becoming a media mogul. In 1973, at the young age of 19, she became Nashville's first African American news anchor. She was still a college student when she took on this responsibility, working for WTVF-TV. From there, she moved to an anchor role in Baltimore, where she met and worked with longtime friend Gayle King, then on to Chicago for what became the Oprah Winfrey show.

Though individual groups based on its principles had been meeting for more than 20 years, 100 Black Men of America, Inc. was officially established as a national organization in 1986. The organization focuses on mentoring and creating opportunities for African American youth at a community level. As of 2020, the group has more than 125,000 chapters throughout the United States and in other countries.

In 1987, Clifton R. Wharton, Jr., Ph.D. became the first Black Chief Executive Officer (CEO) of a Fortune 500 company when he was appointed as chairman and CEO of the Teachers Insurance and Annuity Association of America/College Retirement Equities Fund (TIAA-CREF), an organization founded by Andrew Carnegie. Wharton served in this capacity until 1993 when he left to serve as the United States' Deputy Secretary of State.

The National Civil Rights Museum was founded in 1991. It is located in Memphis, Tennessee, on the sight of what used to be the Lorraine Motel. This is where Dr. Martin Luther King, Jr. was shot and killed in 1968. Its exhibit document the history of the civil rights movement, from the events leading to its origin through the present day.

In 1989, William H. Gray III became the first African American Majority Whip in the United States House of Representatives. He served as chair of the budget committee, another position not previously held by a person of color.

Prior to 1967, interracial marriage was illegal in the United States. That year, in the Loving v. Virginia decision, the Supreme Court unanimously ruled that Virginia's law banning marriage between people of different races is unconstitutional, as it violated the Equal Protection Clause of the 14th amendment. Still, laws remained on the books in many states long after the Loving v. Virginia ruling. In 2000, Alabama became the last state to remove language banning interracial marriage from its constitution.

Even though Martin Luther King’s birthday was established as a federal holiday in 1983, it took until the year 2000 for the observance to be recognized in all 50 states. The third Monday in January is now a federal holiday and a state holiday throughout the entire United States.

History in the Making: 2001-Present Day

Black history continues to be made every day. Discover interesting lesser-known facts that have occurred since 2001.

When Robert Louis Johnson sold Black Entertainment Television (BET) to Viacom in 2001, he became the first African American billionaire in the United States. Johnson and his wife founded BET in 1979, at which time it became the first cable television network to specifically target the African American market. He continued to lead the firm for several years before founding RLJ Companies.

In 2017, the National Football League (NFL) introduced its Inspire Change initiative. Through a joint effort of team owners and players, this initiative focuses on the social justice issues of education, economic advancement, police/community relations, and criminal justice reform. Between 2017 and 2020, the initiative awarded grants totaling more than $70 million to support the efforts of nonprofits seeking to reduce barriers and effect positive change related to these key issues. In 2020, the NFL committed an additional $250 million to be contributed over a 10-year period.

In 2018, the Equal Justice Initiative (EJI) opened The Legacy Museum: From Slavery to Mass Incarceration in Montgomery. The museum is located in a downtown warehouse where slaves were imprisoned prior to being sold at a nearby slave market. The museum provides compelling insights into extreme racial injustice, including slavery, lynchings, segregation, mass incarceration, and much more.

National Memorial for Peace and Justice

The EJI also opened the National Memorial for Peace and Justice in Montgomery in 2018. This memorial is intended to recognize and honor the thousands of people who lost their lives to racial lynchings that occurred in the United States, as well as those whose lives have otherwise impacted by this horrific form of racial terrorism. There are 800 steel monuments on the site; one for each American county where one or more racial lynchings have taken place.

In 2018, at the age of 18, Maame Biney became the first African American woman to qualify for the U.S. speedskating Olympic team. As such, she participated in the 2018 Olympic games, just a year after taking a bronze medal in the world junior championships. Biney was born in Ghana; her family immigrated to the United States.

During the summer of 2020, General Charles 'CQ" Brown was confirmed as Chief of Staff for the United States Air Force. As he took the oath of office, he became the first African American to serve as chief of one of America's military service branches. He was confirmed by a unanimous Senate vote.

An Enduring History in the Making

There are many interesting facts about Black history, some from two centuries ago and others that are more recent. If you enjoyed reading these lesser-known facts, take the time to further explore African American history. Start with some common Black history facts, then dig deeper. Learn about Martin Luther King, Jr.'s impact on the civil rights movement, but don't stop there. Make a point of discovering the continued contributions those of African descent are making in the United States and around the world.