Did you know that there are approximately 200 million bugs for every human on Earth? That's around 10 quintillion bugs on the planet — and that's just insects! Keep reading for more arthropod and bug facts that seem like they must be science fiction, but are actually true. 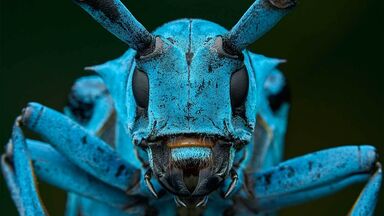 Like all other insects, as well as all spiders and crustaceans, ants are arthropods. They are invertebrates who live in colonies made of three types of ants: one queen, some males and many female workers. Check out these amazing facts about ants.

If all you think about when you see a bee is its sting, you're missing an incredible creature! Take a look at these bee facts to learn more about the tiny honey makers.

Everyone loves a butterfly, but not many people think about the creatures before they sprout their wings. Read up on caterpillars and their crazy characteristics.

Many people know one fact about centipedes: they have 100 legs. But that's not true! Learn all about these quick and captivating arthropods.

You may shudder when you see a cockroach, but there's a lot you may not know about the hard-shelled creatures. Check out these creepy facts about scurrying cockroaches.

Don't squish that spider! Spiders do a lot more than look scary to humans. Read up on the talents and characteristics of spiders.

You may have heard more myths about bugs that aren't necessarily true. Take a look at these facts about other bugs to test your invertebrate knowledge.

Bugs may look like tiny monsters, but they are an important part of every ecosystem. We depend on them to pollinate our agriculture and eat other pests, and larger animals depend on them as a vital source of food. Learn about another creature that is actually less scary than it looks and sounds with vampire squid facts. Then, check out these weird animal facts for curious minds if you'd like to learn more about the animal kingdom.