Apollo is one of the most prominent gods in Greek mythology. Discover some interesting Apollo facts to expand your understanding of this fabled and powerful god of Ancient Greece. 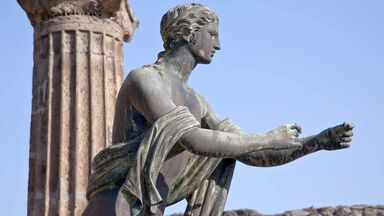 statue of Apollo in Pompeii
Advertisement

Apollo's family tree is more than a bit intimidating. He was definitely highborn in the world of Greek mythology.

Apollo was a very important figure in Greek mythology.

A number of symbols are associated with the Greek god Apollo.

Now that you've learned some basic facts about Apollo, a prominent Olympian with a special place in Greek and Roman mythology, it's a good time to learn more about the different types of mythology. Start by exploring Greek vs. Roman gods to get a sense of how the deities were viewed in both traditions.