Are you interested in animals and want to learn more about creatures that live in the coldest parts of the world? If so, you're sure to be fascinated by these arctic fox facts. These cool and curious critters have some truly unique adaptations that allow them to thrive in extreme conditions. 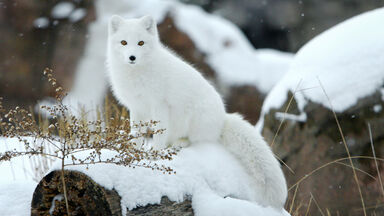 These amazing animals have several interesting characteristics, some of which are unique to arctic foxes while others are shared with other types of foxes.

Arctic foxes have many adaptations that help them thrive in the extreme climate they call home. From growing in their own winter coat to how their bodies are uniquely adapted to frigid arctic and subarctic conditions, these animals are highly adaptable.

These highly adaptable animals have some interesting behavior patterns and habits. From how they find food to the groups in which they live, these creatures are fascinating.

As you can see from this list of fascinating facts, arctic foxes are truly amazing animals. It's important for kids and adults alike to learn key facts about important members of the animal kingdom. If you enjoyed learning about arctic foxes, take the time to discover more wildlife facts. Start with opossum facts for fun and education. From there, review basic types of animals and their characteristics. Soon you'll be well-versed in animal information.