As far as we know, Earth is the only planet that is able to sustain life in our solar system. But what makes Earth such a perfect home for humans, animals, plants, bacteria, and insects alike? Read these Earth facts for kids to learn why there's no place like our home planet. 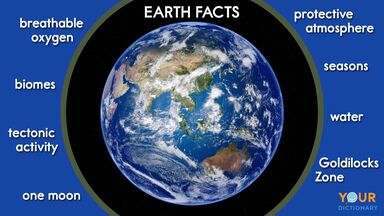 Earth Has Water on Its Surface

Water is one of the most special things about Earth. Scientists have not found another planet with liquid water quite like ours.

That's a perfect way to keep all of us alive on our planet!

Earth Has the Best Placement in the Solar System

If you've ever read "Goldilocks and the Three Bears," you know that Goldilocks likes things to be just right. That's why Earth is in the "Goldilocks Zone" — not too cold, not too hot, but just right!

You're too small to feel how active the ground is under your feet, but the Earth's crust is constantly moving!

Earth is also made of different stuff than other planets, mostly because we have water and living things. Some minerals, such as cobaltominite and abelsonite, are not found on other planets. The relationship between Earth's minerals and its presence of life is unique as well. The earliest life on Earth came about from the energy created by minerals breaking down. Those microbes created new, unique minerals, which created new, unique organisms. Those organisms produced oxygen, which led to the creation of the atmosphere where life thrives today. Rocks helped life to form, and life helps rocks to form!

Earth Has Many Biomes

What do you, a mushroom and an elephant have in common? You're all alive — and you probably live in different places. Earth's water supply, rocky continents and atmosphere allow many different climates to exist. This allows for biodiversity all over the planet, which leads to the success of ecosystems. Life thrives on every continent on Earth because living organisms can eat, drink and reproduce in their biomes. These diverse systems have allowed organisms to adapt and evolve in order to best survive from generation to generation.

Ever wonder why some months are freezing cold and other months are nice and warm? Earth has four distinct seasons: winter, spring, summer, and fall. Earth is not a perfect sphere (it's an oval-shaped ellipse), and it's slightly tilted in its rotation. This means the sun hits different parts of the Earth at different points in its 365-day orbit. For example, December and January are cold winter months in North America, but in Australia on the other side of the world, December is the first month of a warm summer season. That's because the Southern Hemisphere is slightly tilted toward the sun during these months. Not a bad time for a trip to Australia!

Earth Only Has One Moon

We're so used to seeing the moon in our night sky, but that space rock is pretty special.

Is Earth the Only Planet With Intelligent Life?

So is Earth really the best planet ever? Scientists believe that the perfect combination of all of these factors — the Earth's placement in the solar system, its oceans, its plate tectonics, its rotation and tilt, and its moon — are what allow intelligent life to grow on our planet. But Earth may not be the only perfect home out there! Check out these fascinating space facts for kids to learn more about what may be beyond the scope of our own atmosphere