Fun Facts About Georgia for Kids: A Taste of the Peach State

Georgia has a long and storied history. From fascinating bits of history to entertaining trivia and fun activities, learning about this southern state is anything but boring! Discover some interesting and fun facts about Georgia. 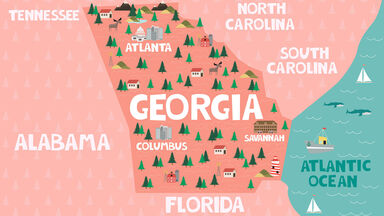 state of Georgia on map for kids
Advertisement

What Is Georgia Known For?

Georgia is known for many notable facts, events and accomplishments. From interesting agriculture to fun places to visit, discover some of the defining facts about this lovely state.

Georgia has been around since 1733, first as a colony and later as a state. Many interesting events of historical significance have occurred since that time.

Facts About Famous People From Georgia

Many well-known figures hail from Georgia. You might recognize some of these names from current events, history class and pop culture.

Getting to Know Georgia

Whether you've ever visited Georgia or not, chances are that you feel like you know the state a bit better now that you've had a chance to explore some fun facts about it. You'll probably think about Georgia the next time you bite into a fresh juicy peach or eat a sweet-tasting onion ring.

Now that you know more about Georgia, take the time to further explore the U.S. and its states. Begin by reviewing this list of words that describe the United States. Then choose another state to learn about, like fun facts from California. From there, explore a comprehensive list of all of the state abbreviations.