Key Facts About North America for Fun and Learning

North America is a vast continent with a rich history. Discover fascinating facts about North America’s geography, history and culture. 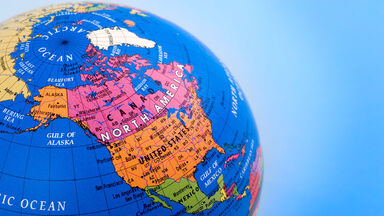 While not the largest continent out there, North America is among the biggest ones. In fact, it comes in third when you look at the sheer size of it. Explore other fun geography facts about North America.

It's the Home of the Largest Island

Did you know that Greenland is the largest island in the whole world? It’s also a large part of the North American continent. Although it is an autonomous territory, it is technically part of North America. Greenland's total area is 836,300 square miles, and it’s bigger than the state of Alaska, which is the biggest state in the U.S. And another fun fact, despite its name, Greenland is actually covered in ice.

When broken down into the basic regions, you can find five in North America. According to National Geographic, the regions you can find in North America include the Great Plains, Canadian Shield, Eastern region, mountainous west, and the Caribbean. The different climates range from tropical to icy.

The Largest City Is Mexico City

Death Valley Is the Lowest Point

At 282 feet below sea level, Death Valley in California is the lowest point in North America. Death Valley’s ominous name was earned from early lost pioneers. While all but one lived, they assumed this foreboding desert would be their final resting place.

The Largest Country in North America Is Canada

The Missouri Is the Longest River in North America

Coming in at a whopping 2,341 miles, the Missouri River is the longest river in North America. Nicknamed Big Muddy, it travels from Montana to Missouri, eventually joining with the Mississippi River, the second-longest river on the continent.

Denali Is the Highest Mountain in North America

When it comes to the highest mountain in North America, it can be found in Alaska. Formerly named Mt. McKinley, Denali is more than 20,000 feet above sea level.

Another interesting fact about North America is that it doesn’t have any landlocked countries, or countries that don’t touch the ocean. All the countries in the entire continent touch an ocean.

While North America is full of fun facts about its geography, it also has a few secrets that you might not know. Dive into some interesting and unique facts found in North America.

North America Has All the Biomes

When it comes to biomes, North America covers all the major ones. You can find the five major biomes of aquatic, grassland, forest, desert, and tundra covering all of North America.

The Region Grows A Lot of Corn

Corn is a hot commodity in North America. Not only can you eat it, but it can also be used for fuel and other things. When it comes to corn production, North America reigns supreme. The U.S. is by far the top producer of corn compared to anyone around the world.

It's Named After an Italian Explorer

It wasn’t the Spanish who named North America; instead, it was an Italian explorer named Amerigo Vespucci. Amerigo was given this honor because he was the first to realize that North America was a separate continent.

One National Park Is the Size of Switzerland

In addition to having a lot of lakes, Canada also has a huge national park. The Wood Buffalo National Park is the largest national park in Canada and about the size of Switzerland. It’s just one of over 40 national parks in Canada. Could you imagine fitting a whole country into one national park?

It's Home to the First Written Constitution

While the United States might be relatively new on the country scene, it’s still done monumental things in its time. That includes being the first country ever to have a written constitution. That’s right, the Constitution of the United States set records.

While North America has many interesting countries within its borders, the United States, also known as America, is full of some fun facts you might not even realize. Check out a few American facts to round out your exploration of North America.

You might only be able to think of four time zones in the U.S. like Pacific, Mountain, Central, and Eastern, but Alaska and Hawaii also have their own time zones. That might make setting up a Zoom meeting tough.

Not only does the United States have a lot of lakes, but Canada does as well. Canada has 62% of the world’s lakes within its borders. Now that is a lot of lakes!

President of the U.S. Is One of the Most Dangerous Jobs

Steers are a way of life in some states. They like them so much; several states have more cows than people. In fact, South Dakota has a 4:1 cow to person ratio.

The Statue of Liberty Is in New York and New Jersey

If you want to see America’s most iconic monument and symbol of freedom, head on over to New York … or New Jersey. While it’s commonly associated with the city and state of New York, the Statue of Liberty is actually a national moment of both New York and New Jersey.

It's the Home of the World’s Longest Boardwalk

The Atlantic City boardwalk has a long and famous history, including being the longest boardwalk in the world. Along this 4-mile boardwalk, you can find gaming, shows, shopping, dining, golf, and other fun attractions. The boards of the boardwalk are also replaced every 12 years because of traffic.

The Isthmus of Panama Is the Narrowest Part of North America

North American countries narrow from Mexico to Panama creating a land bridge to South America. Therefore, Central America has a lot of ocean access. In fact, no area in Central America is further than 125 miles from the ocean.

It's Filled With Vast Cultures and Heritage

Central America has a vast history and is full of world heritage. UNESCO has declared 18 World Heritage Sites found in Central America. These include the Viejo Leon in Nicaragua and the Maya Site of Copán in Honduras. You can also explore the Tikal National Park in Guatemala.

Mexico Is the Birthplace of North American Print

It's Home to the Smallest Volcano

The prize for the world's smallest volcano goes to Mexico for Cuexcomate. While it's actually more of a geyser than a volcano, Cuexcomate measures in at only 43 feet tall.

North America might be one of the newer continents discovered worldwide, but it’s full of fun and amazing facts. Keep your exploration of world facts revved up by looking at intriguing facts about India or Ecuador facts.