What Does Labor Day Mean? The History Behind the Summer Holiday

Labor Day is mostly associated with the end of summer, the last chance for a good barbecue, and sales. It doesn’t involve all the bells and whistles of hunting for eggs or giving gifts, but Labor Day stands for important things that are intrinsic to the history of the American working class. 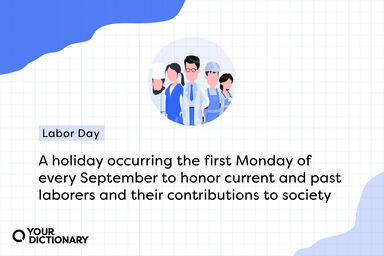 What Does Labor Day Mean?

Labor has a few different meanings with a few different parts of speech. As a noun, it commonly refers to “general physical or mental exertion.” Labor also refers to “work performed for wages.” Labor comes from Old French and Middle French labour and labeur, initially meaning “trouble, effort, affliction, misfortune” before evolving to mean “hard work.”

While labor initially had connotations with physical laborers (think coal miners and factory workers), it now applies to a larger swath of workers, from writers to teachers to doctors. Essentially, if you’re not a billionaire or a C-suite executive, you’re probably a laborer.

Labor in reference to work is where we get Labor Day. In most circles, labor generally refers to labor unions and the working class.

While its roots are in organizing and protest, the modern Labor Day broadly honors current and past workers and the American labor movement for its contributions to the country. This holiday occurs every first Monday of September.

Do You Capitalize “Labor Day”?

Labor Day is a proper noun referring to the name of a specific holiday, so it should be capitalized.

If you see someone spell it labour with that extra “U,” you’re probably talking to someone who uses British English. This occurs in a lot of other words, including:

The Origin of Labor Day

In the late 1800s, labor unions were fairly small and weak. Organizations like the Central Labor Union of New York aimed to unite unions across industries to build power and worker solidarity to push for larger change. However, actually meeting and organizing with other laborers wasn’t easy.

The first Labor Day was organized by the Central Labor Union on September 5, 1882. The government didn’t recognize the day as a holiday, meaning it wasn’t an official day off of work. Instead, workers declared a one-day strike, which included a march from City Hall to Union Square followed by a picnic.

Although the concept of Labor Day spread to other states, the holiday wasn’t federally recognized until President Grover Cleveland signed it into law on June 28, 1894.

Canada also shares our Labor Day, though Canadians tend toward British English, so it’s Labour Day to them.

“A merry Labor Day to you and yours” might get you some weird looks, but “Happy Labor Day!” is as good a greeting as any. The day is intended more for action than for greetings, so you’re encouraged to:

Labor Day is all about worker solidarity and honoring every worker, past and present, across all industries. If you’re a laborer of any kind, take a minute to give yourself a warm, thankful pat on the back.

Is Labor Day the End of Summer?

Labor Day is symbolically the end of summer in the U.S. The dog days of summer are behind us, and a new school year is usually just around the corner.

In reality, the autumnal equinox, which actually marks the end of summer and beginning of fall, is around September 22 every year, so you still have a couple weeks after Labor Day to enjoy the summer vibes.

Can I Wear White After Labor Day?

No one is exactly sure where that saying came from. Some speculate that wearing white after Labor Day was a show of wealth. The wealthy typically wore lightweight, breezy clothes on their end-of-summer vacations. Wearing white also meant that you probably didn’t work in the types of jobs that involved dirt and stains.

Today, the idea of not wearing white after Labor Day is pretty outdated. Everyone wears white, and so should you!

Labor Day vs. May Day

The closest international analog to Labor Day is May Day, which occurs the first of May. May Day, more officially known as International Workers’ Day or Labour Day in some countries, started in 1889 during the International Socialist Conference.

The day was marked in honor of the Chicago workers who went on strike in support of standard eight-hour workdays on May 1, 1886. This general strike culminated in a bloody conflict known as the Haymarket Riot.

The main difference between Labor Day and May Day is where and when they’re celebrated. Labor Day is a holiday in the U.S. and Canada occurring on the first Monday of September.

May Day is celebrated on May 1 every year by over 160 countries, including:

While Labor Day and Memorial Day often get lumped together, they are distinctly different holidays with different roots. Labor Day honors current and past laborers, but Memorial Day is specifically for mourning and honoring U.S. military personnel who died in service. Memorial Day is the last Monday of May.