Are you fascinated by air travel and government or politics? If so, chances are that you'd like to know more about Air Force One and the role it plays in transporting the president of the United States (POTUS). This term is used a lot when referring to presidential travel, but what does it really mean? Discover some interesting Air Force One plane facts. 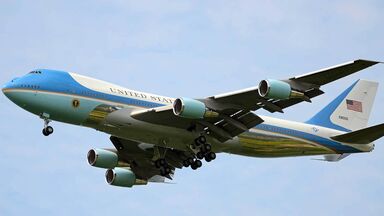 air force one in flight
Advertisement

Key Facts About Air Force One

You may be surprised to learn that the phrase Air Force One is more about who is flying rather than what plane is in the air.

Facts About Planes in the Presidential Fleet

The presidential fleet planes are not exactly the same as 747s that are used by commercial airlines. They are VC-25 versions, which means they're military planes set up especially to transport POTUS and be operated by the USAF. These planes have many unique features.

Learning about where the presidential fleet is based or how it usually flies can be a lot of fun too!

Reviewing these facts about Air Force One provides interesting insights into how the president of the United States travels via airplane. You may also be interested to learn that the call sign is different when the president travels by helicopter. In that case, the designation Marine One is used. Now that you're familiar with military terminology specific to presidential travel, expand your vocabulary by learning some Air Force acronyms. If you find that interesting, go even further by mastering more military acronyms.