The Salem Witch Trials: Real Facts That Will Haunt You

The Salem witch trials marked a seven-month period of mass hysteria in 1692 Colonial America. Over 150 people were arrested for allegedly using witchcraft to inflict harm on their fellow townspeople, resulting in the executions of 20 people and the prison deaths of five more. The legacy of the trials has far outlasted their duration, even inspiring the term "witch hunt" into the English lexicon. Take a look at these Salem witch trials facts and challenge what you think you know about them. 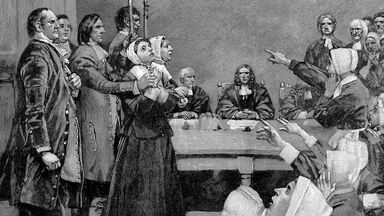 No One Was Burned at the Stake

Contrary to popular belief, no one was burned at the stake during the Salem witch trials. Tens of thousands of men and women accused of witchcraft were executed all over Europe during the 16th and 17th centuries, many of whom were indeed burned at the stake. However, the majority of Salem witch trial victims were executed by hanging, and one person (Giles Corey) was executed by being crushed under rocks.

Most Accusers Were Girls Under Age 20

One of the historically accurate elements of Arthur Miller's allegorical play The Crucible is that the majority of the witchcraft accusers were children and teenagers. The first accusers, Elizabeth Parris and Abigail Williams, were 9 and 11 years old, and the oldest accusers were 19 and 20. Women, especially young women, were not especially powerful in Puritan society, so it's significant that the testimonies of these teenagers were enough to turn a town of neighbors into enemies.

Many innocent Salem residents were put to death based on spectral evidence. Spectral evidence is courtroom testimony where a witness describes the harm an accused's spirit has inflicted on them, rather than the accused themselves. Prominent minister Increase Mather called on the courts not to admit such evidence, while other ministers, such as Mather's son, Cotton Mather, supported its use but believed other evidence should also be required.

Witch Tests Were Impossible to Pass

"Witch tests" used in Europe were brought into the Salem witch trials to prove whether the accused were actually guilty of witchcraft. If an accused witch managed to pass one test, the court would try another test until he or she eventually failed. The tests included:

These "witch tests" used in both Europe and New England were impossible to pass. Most notable was the case of minister William Burroughs, who attempted to pass the Prayer Test by reciting the Lord's Prayer at the gallows. His perfect recitation only further proved his supposed guilt, as Cotton Mather declared that "the devil often had been transformed into the Angel of Light."

The Prison Basement Was Known as Witch Jail

The witch jail, known today in Salem as Old Witch Gaol, was essentially a dungeon for the accused. Men and women kept in the prison basement were starved, tortured and exposed to inhumane conditions. Salem built a new jail in 1814 and razed the building in 1956.

Most of the accused men and women were middle-aged or elderly, with one notable exception. Dorothy Good, the four-year-old daughter of Sarah Good, was accused of being deranged and animalistic after consorting with the devil. Dorothy confessed her supposed crimes to the authorities and claimed to have seen her mother with the devil. Dorothy's confession allowed her to be released on bond after nearly seven months in prison. Her mother was hanged during Dorothy's time in jail.

The Governor Only Stopped the Trials When His Wife Was Accused

The trials lasted seven months spanning 1692 and 1693. Local authorities, including the governor of the Province of Massachusetts Bay Sir William Phips, allowed the hysteria to continue long enough to kill many innocent people. However, when Sir Phips' wife, Lady Mary Phips, was accused of witchcraft, the governor worked quickly to eliminate spectral evidence from the trials. In a matter of weeks, the trials were over and those awaiting trial or execution were released.

25 Total People Died As a Result

Bridget Bishop was the first accused "witch" to be executed. She was tried and found guilty on the same day and hanged one week later on June 2. There were several more group hangings during the summer of 1692, including:

Five more people died in prison as they awaited their trials, either from malnourishment or from injuries sustained during torture. One of those people was Sarah Good's infant daughter Mercy, who was born in prison but died shortly after birth. Two dogs were also executed for their alleged contribution to witchcraft rituals.

More Than 150 People Were Arrested in All

Twenty-five people lost their lives during the Salem witch trials, but many more lives were altered or destroyed as a result. All told, more than 150 were accused and arrested for the crime of witchcraft. Dozens of these people were pardoned after the trials and several escaped their sentences.

The real facts of the Salem witch trials establish them as a horrific period in American history. However, although the trials themselves only lasted a matter of months, their influence still resonates in American politics, literature and drama. Learn more about the parallels between the 17th century and the 20th century Communism trials of Joseph McCarthy.