Are you looking for facts about tsunamis? Tsunamis are extremely powerful natural phenomena that occur all-too-frequently with devastating impact. Discover 12 key tsunami facts that will help you better understand these oceanic phenomena. 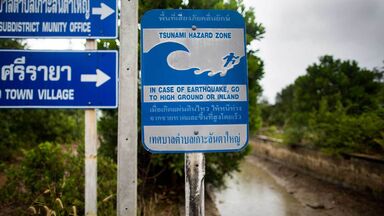 Tsunamis occur as a result of a sudden and significant displacement of the ocean.

Tsunamis vary greatly in size, depending on factors like how deep the water was where they were formed, how far they are from the shore, the composition of the body of water in which they form, and the shape of the shoreline.

Tsunamis can travel up to 500 miles per hour (mph) over deep water. As a result, a tsunami that starts far offshore can reach the shoreline in just a matter of minutes. Upon reaching shallow water, tsunamis slow down to move in the range of 20 to 30 mph.

Facts About the Time Between Waves

Since a tsunami involves a series of waves rather than a single wave, it's important to consider the period of time in between waves. They can continue impacting an area for multiple days.

Local vs. Regional vs. Distant Tsunamis

Tsunamis are referred to as local, regional or distant, based on whether they form fairly close to shore or far out in the ocean.

While tsunamis first impact inland areas along the shoreline, their impact can be felt far inland. Major tsunamis can travel inland up to 10 miles, with flooding occurring for many miles beyond that. For example, in 2011 Japan was impacted by a tsunami that flooded a 200 square mile area along the coast.

Weather authorities around the world continually monitor for tsunami risk. Numerous tsunami warning systems monitor seismic activity and other factors that could lead to the formation of a dangerous tsunami. The goal is to be able to warn people who may be impacted by a tsunami as early as possible. The U.S. tsunami warning system is operated by the National Oceanic and Atmospheric Administration (NOAA)/National Weather Service (NWS).

When a tsunami risk is identified, weather authorities issue an appropriate notification. Depending on the situation, they may issue an advisory, a watch or a warning.

While tsunamis can occur in any ocean or sea (or other major body of water), they are most common in the Pacific Ocean. Nearly 75 percent of tsunamis occur in the Pacific. This is because there so much volcanic and seismic activity near the Pacific Ring of Fire.

Because most tsunamis occur in the Pacific Ocean, the U.S. states most at risk of experiencing a tsunami are ones that touch it. As a result, within the U.S., the greatest tsunami threat is to Oregon, California, Washington, Hawaii, and Alaska. This risk for these states is classified as "high or very high" by NOAA/NWS. Additionally, several U.S. territories are classified as "high" risk of tsunami impact due to activity in the Atlantic Ocean or Caribbean Sea. They are: American Samoa, Guam, the Northern Mariana Islands, the U.S. Virgin Islands, and Puerto Rico.

The deadliest known tsunami occurred in December of 2004. It originated in the Indian Ocean with a 9.1 magnitude undersea earthquake off the coast of Sumatra in Indonesia. Within 20 minutes of the powerful megathrust earthquake, the first of several 100+ foot waves hit the shoreline. Waves impacted different parts of the shoreline for eight hours, impacting Sumatra, Thailand, India, Sri Lanka, and South Africa. The first wave killed 100,000 people, with a final toll of nearly 230,00 lives lost.

If you live in an area at risk of a tsunami, it's very important to have an emergency plan that includes a plan for evacuating and maintaining communication with family and loved ones.

Respect the Power of Tsunamis

Now that you're learned a few interesting facts about tsunamis, it's easy to see just how dangerous this type of event really is. Since most tsunamis are triggered by earthquakes, this is a great time to learn some earthquake facts. Not only can this help expand your understanding of tsunamis, but you'll also develop a deeper understanding of the natural world. If you like learning about interesting water movement, you might also want to explore hurricane facts.